It is a sign of the changing face of football in this country that the match between Liverpool and Manchester City was seen as much as a clash between two coaches as it was between two groups of players.

The media narrative surrounding the match painted this as the first time that Jurgen Klopp and Pep Guardiola had faced one another with something approaching similar squads. In Germany even though Klopp had a very good Dortmund team they were still dwarfed by the overall quality of the Bayern Munich side that Guardiola had built in Bavaria.

Add in to this narrative the fact that Chelsea seem intent on putting as many points as possible between themselves at the top of the table and the challenging pack – including Liverpool and Manchester City – you can see why this match took on added importance.

There has been a sense that some sections of the Manchester City fanbase are starting to turn against Guardiola already, unhappy that their early season form has not been replicated in recent weeks as they have dropped away from the top of the table. Those fans of course are jumping the gun as Guardiola will still go on to become an extremely successful coach with the club but it still gives a sense of the general feeling around the club.

The most interesting piece of team news from Liverpool saw Divock Origi drop to the bench with his place being taken by the German midfielder Emre Can. That move saw Adam Lallana push forward in to the forward line on the left hand side whilst Emre Can slotted in to the midfield.

That caused a chain reaction in terms of player roles with Can moving in to the role occupied previously by Wijnaldum and Wijnaldum himself moving over to the right hand side of the central midfield to take the role vacated by Lallana. As such we could expect to see the Dutchman take on a more attacking role as they go forward.

Simon Mignolet continued in goal with Loris Karius still relegated to the bench. The defensive line was as we have seen in recent weeks with Clyne, Lovren, Klavan and Milner making up the defence.

Alongside Wijnaldum and Can we see the Liverpool captain Jordan Henderson take up the controlling midfielder role.

In attack Sadio Mane would play his last match before leaving for the African Cup of Nations and Roberto Firmino took up his central role once more looking to add to the goal that he scored in the match before.

One of the recurring complaints surrounding Jurgen Klopp’s style of play is that he struggles to close matches down when his side have a slight lead and the game is tight. The fact that Klopp describes his own style as ‘heavy metal football’ is indeed indicitave of where the German coaches priorities are.

Against City we saw a different side to Klopp as the red men actively looked to slow the game down and deny City significant space in their final third after Liverpool had gone a goal up. 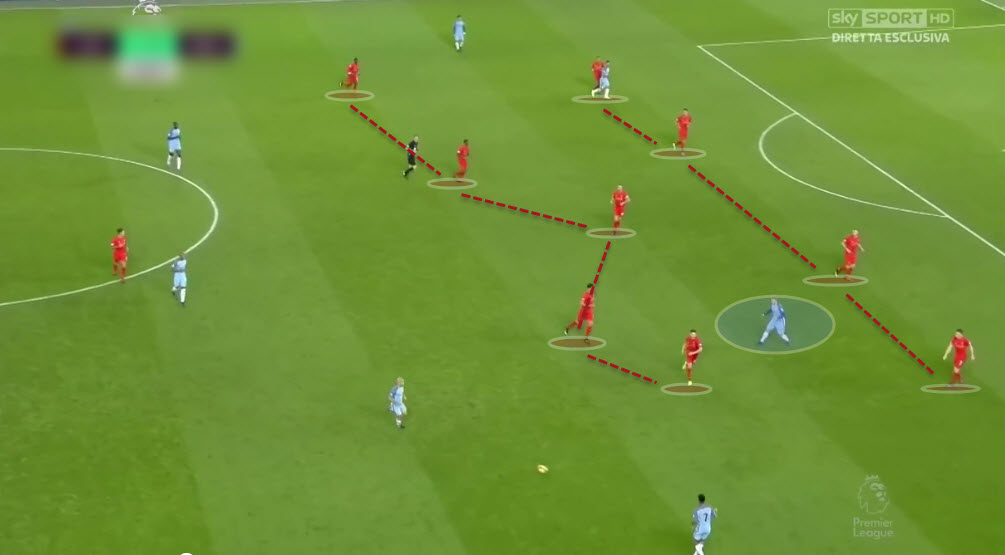 Here Liverpool are in an established defensive phase having gone a goal to the good. Mane on the right and Lallana on the left have both tucked back in to form a five man midfield with Firmino left isolated as the furthest player forward.

In this structure Liverpool are still very strong in their pressing movements with Firmino possessing the work rate to press across the field constantly. This still prevents the opposition form accessing the final third with no pressure added.

Whilst De Bruyne has still found a small pocket of space between Liverpool’s defensive and midfield lines it is very difficult for City to access that space given the positioning of Can and Lallana blocking passing lanes and making it difficult for City to utilise the space around the corners.

One of the obvious benefits of having both Mane and Lallana drop in like this is that they are still explosive enough to transition quickly in to the attacking movement. 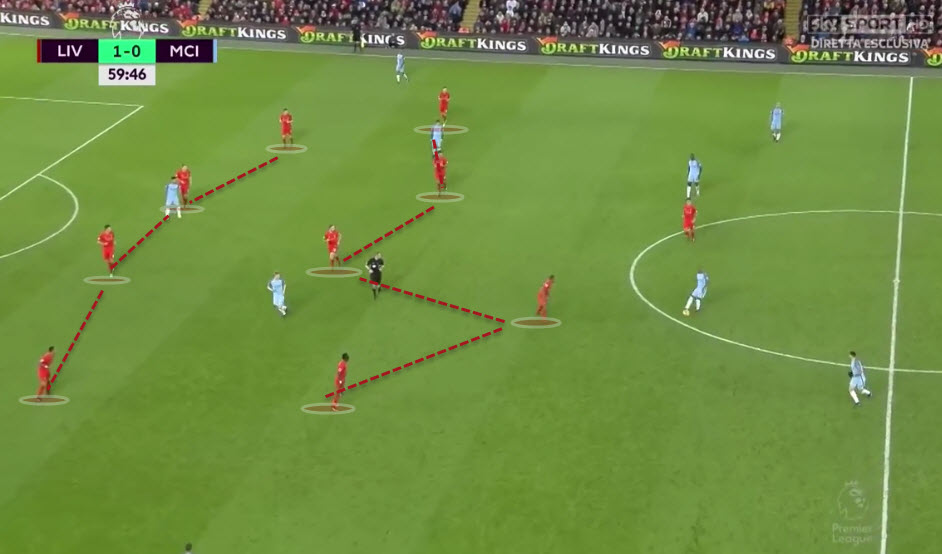 In the second half Liverpool were still providing a strong defensive structure making it difficult for City to play through.

Wijnaldum has stepped out from the midfield line to press the man in possession of the ball. Once again the immediate danger comes in the form of De Bruyne who has once again drifted in to space between the defensive and midfield lines.

The passing lane from the man in possession of the ball to De Bruyne however is covered by the angle of the run that Wijnaldum has made to press the ball. The rest of the midfield line then shifts across to close the spaces that are vacated from the pressing movement of Wijnaldum.

Choosing the best time to press or not press is key in facing a team like City who look to provoke you to leave your position within the defensive block.

One of the keys to playing against this Manchester City side is to access and take advantage of the space around Fernandinho as the controlling midfielder. City tend not to support the Brazilian international well enough with a poor connection between Fernandinho and the two central midfielders.

Of all the teams that City have faced this season Liverpool are possibly the team best placed to take advantage of this weak point in the City defensive structure with the intelligent movement of the likes of Mane, Firmino and Lallana. 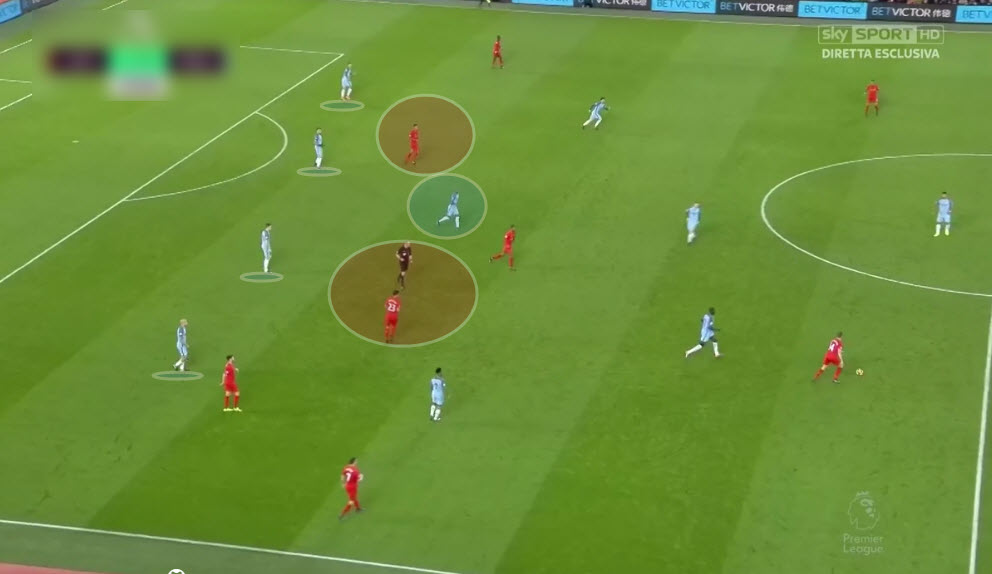 This is the Liverpool attacking structure in the first half. The back four from City are static and do not look as though they are going to look to press out to the forward players who have already moved off of the back line in to space.

In this example Firmino and Emre Can are both accessing the space around Fernandinho and looking to overload the weak spot in the City structure. De Bruyne and Toure are too passive in the central area and are unaware of the danger building behind them.

It is relatively easy for Liverpool to switch the play out and then play back in to the central overload and build an advanced platform from which they can play. 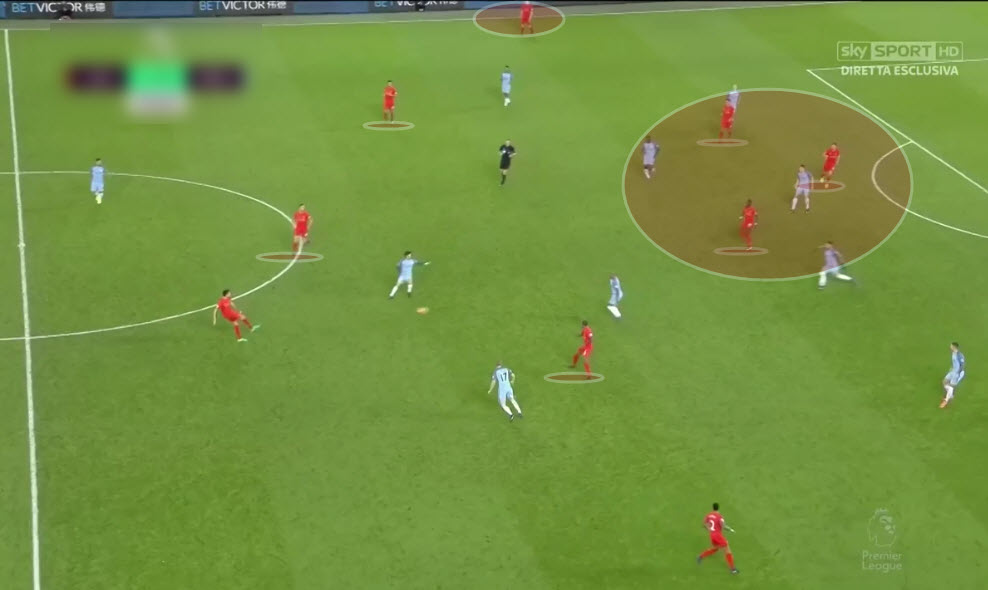 This time the structure from Liverpool sees the front three narrow down in to a concentrated area. This movement is seen by the width provided by Milner on the left and Clyne on the right.

In this instance Liverpool will play in to the central overload before turning the ball out to the wide area to access the final third through the wide area.

Once again the movement used by Liverpool is designed to pull the defensive unit out of position. 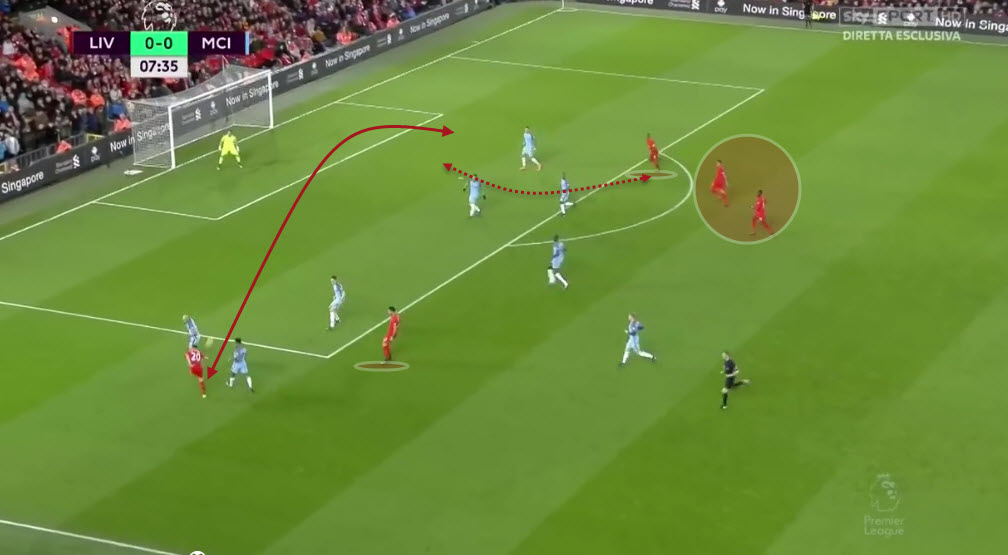 Throughout the match the Liverpool midfielders looked to get in to the final third to connect with their forwards and even moving beyond the forwards when they dropped in to deeper positions.

The Liverpool goal came from one such position as Lallana was released on the left hand side and he was able to get the ball across to find Wijnaldum who had burst past Firmino and Mane to meet the cross and score.

This move was symbolic of the different role that Wijnaldum had taken with Lallana moving in to a more advanced position. Normally Wijnaldum would have held a supporting position in this movement in case Liverpool looked to recycle possession instead of crossing the ball.

Having players within the squad who are capable and confident in taking on a number of different positions on the pitch gives Klopp a plethora of tactical options as they go forward.

This match will go a long way to answering any lingering questions that still remain around Jurgen Klopp. He reigned in his attacking instinct where needed and ensured that whatever tactical change Guardiola tried he had an answer.

The match itself wasn’t the best and too many passes went astray from both sides.

That said the performance is not the be all and end all. Instead the result speaks volumes. Liverpool are in the title race to stay.