The buzzword surrounding Jurgen Klopp’s appointment as Liverpool manger in October 2015 was pressing. Gegenpress this, Gegenpress that, counter-press them here and counter-press them there. Basically, Klopp was supposed to turn up and blitz the Premier League with his high pressing, all action, heavy metal football. When it transpired that this wasn’t going to be the case many in the media felt a little cheated.

The German maverick wasn’t playing ball. To them it was like receiving a toy for Christmas but forgetting to buy batteries. It’s functional but not as effective as it could be.

Klopp didn’t have the players to implement such a press even if he had wanted to and the former Dortmund manager didn’t have the time between games to coach them the many pressing triggers so opted to use a more refined and disciplined press. It worked and Liverpool did have joy using it but, obviously, when you have Lucas Leiva in midfield it’s hard to really play a high press without exposing yourself. The Reds needed legs in midfield but they couldn’t just be runners, no, they had to have ability on the ball.

In came Gini Wijnaldum and Klopp tweaked Adam Lallana’s role. The two attacking midfielders were now playing in a slightly more withdrawn role and the Liverpool manager was making the most of their ability on the ball as well as their skill set off of it; to find, create and shutdown space, to great effect.

In the 1-0 win against Manchester City you really got to see why there aren’t many coaches who can set a team up to press just like Klopp does. It’s not all about running. It’s about positional intelligence to block areas of the pitch, take certain players out of the game and to control the ball even when it’s not in your possession. All while keeping your discipline in what could otherwise turn to chaos.

The Liverpool Press Against Manchester City 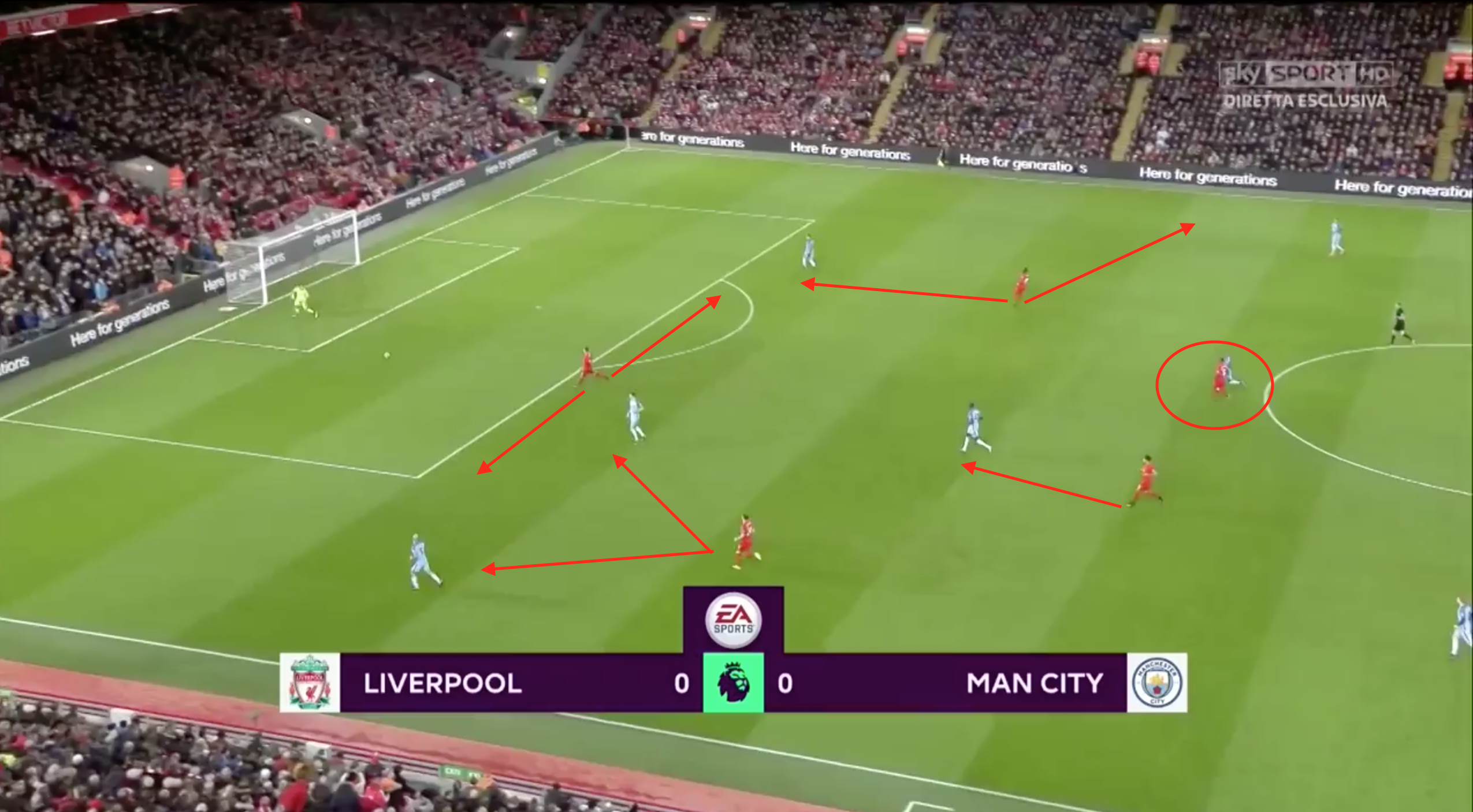 Liverpool’s intentions were clear; prevent Claudio Bravo from being able to pass the ball out from the back and force him to go long. Some teams in this instance would go man for man and commit players forward which in turn leaves them a little exposed in defence.

However, the Reds didn’t do that. Instead of pushing six men forward to block off the passes they position the attacking three – Lallana, Sadio Mane and Roberto Firmino – in areas to cut off various passes. So those three effectively cut off the initial first pass to four City players during the first phase.

The first phase being Bravo passing the ball out. If he passes to the left centre-back who then looks for Kolarov on the left that could be the second phase and would require Clyne pushing on to shut down the City left-back.

Emre Can was tasked with tracking Yaya Toure and Gini Wijnaldum kept tabs on Fernandinho to ensure Bravo had no easy pass. It left Henderson and the back four against Aguero, De Bruyne, Silva and Sterling. 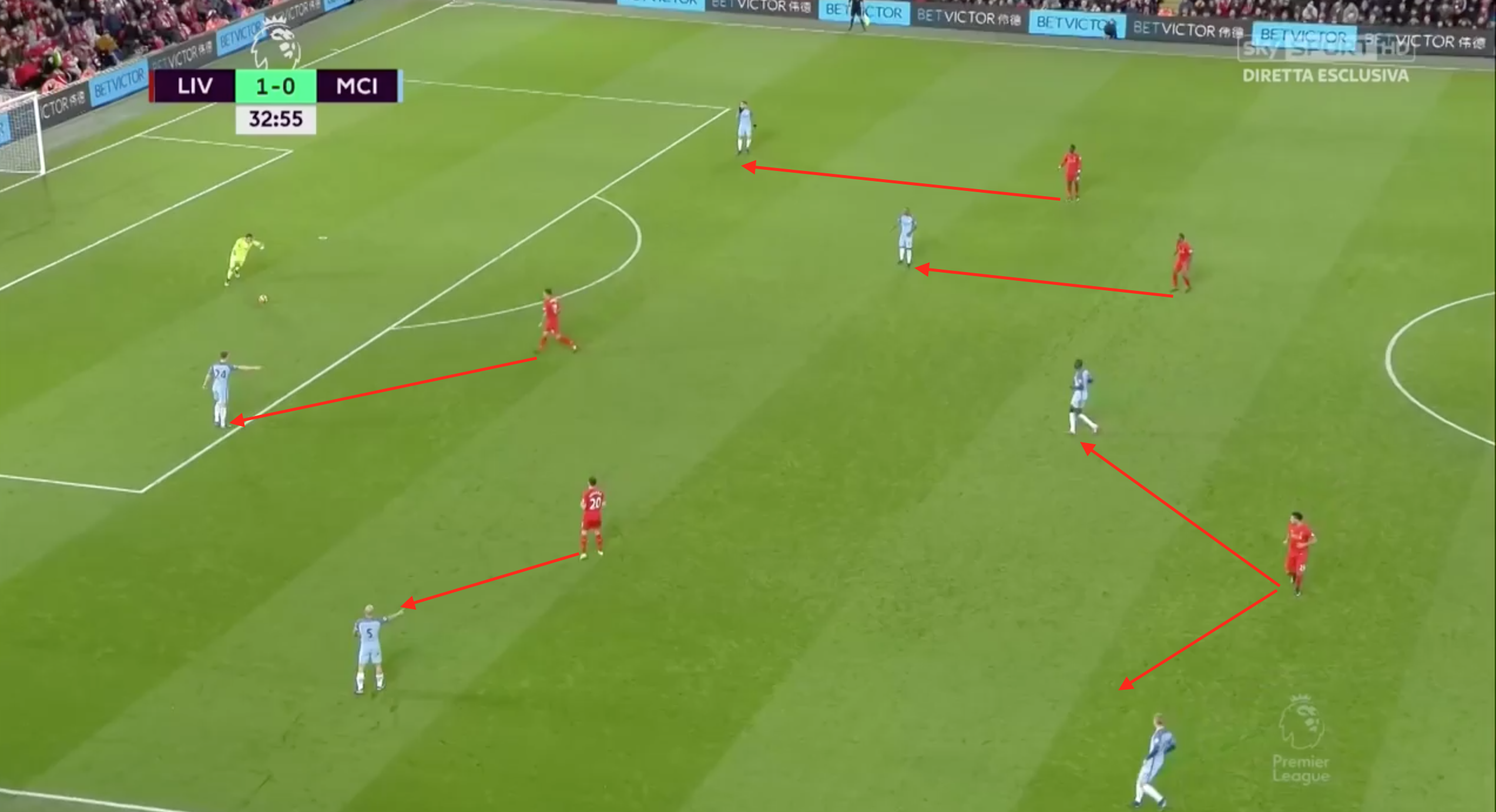 Again, in the picture above you see the clever positioning of the players during the first phase of the press. Adam Lallana is in a position to cut off the pass to Zabaleta at right-back as well as being able to press John Stones if he tries to bring the ball out. Emre Can is able to get over to De Bruyne is necessary as well as being able to get across to Toure if the ball is played in his proximity. Firmino doesn’t break his neck to cut off the pass to Stones because that would lead to an easy pass to Toure.

The Second Phase of Pressing

The second phase is even more important than the first phase. If the likes of Henderson and Can miss their tackle or aren’t in the correct position then the press is nullified and the defence is exposed. The pair brilliantly did their job against City. 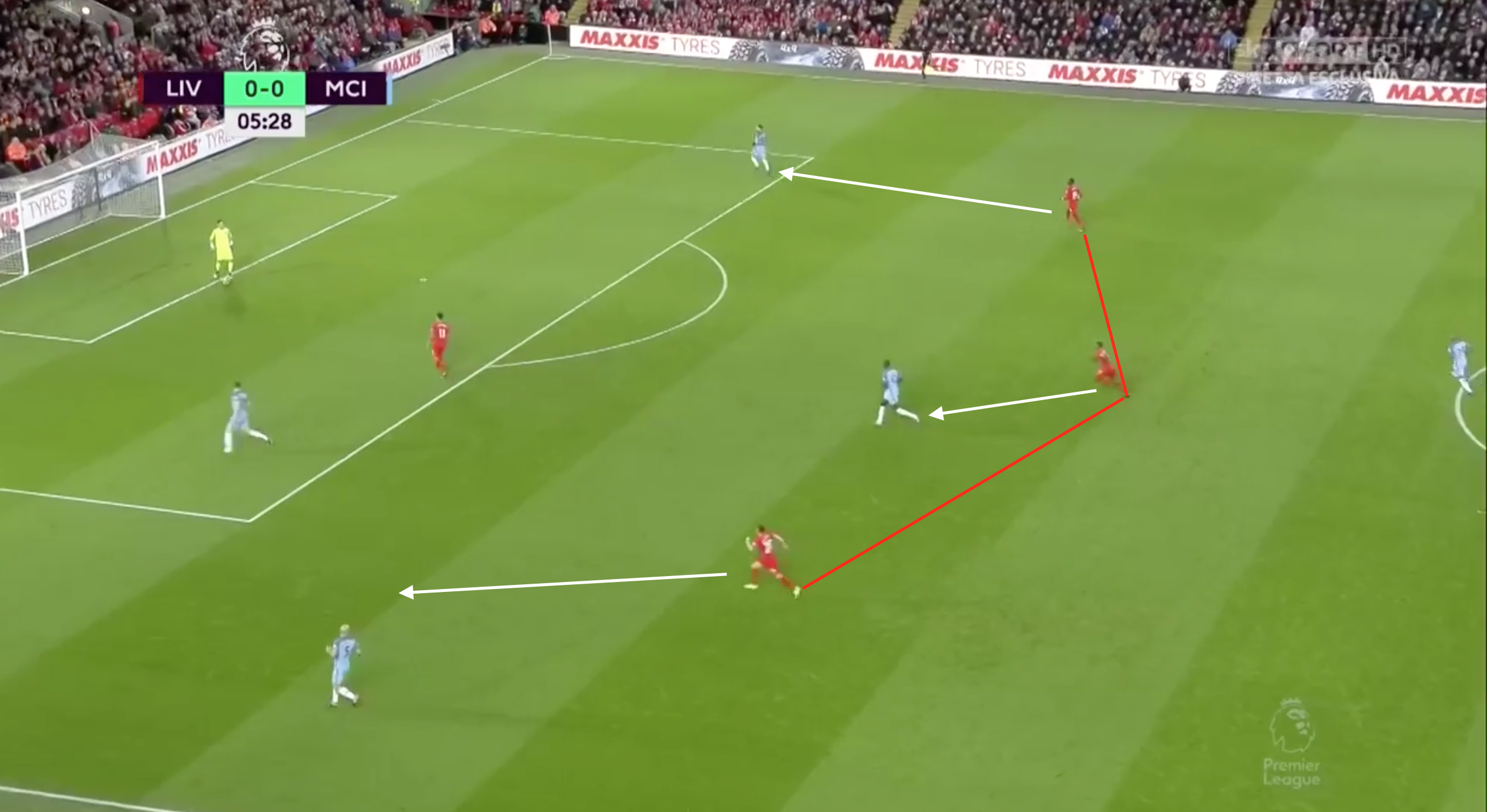 Bravo has the ball at his feet and Liverpool have committed men to their initial press. Wijnaldum, in the role usual associated with Lallana, is pressing Toure in what is the number 10 position. Mane is pressing Otamendi with Lallana sprinting to get into his position. 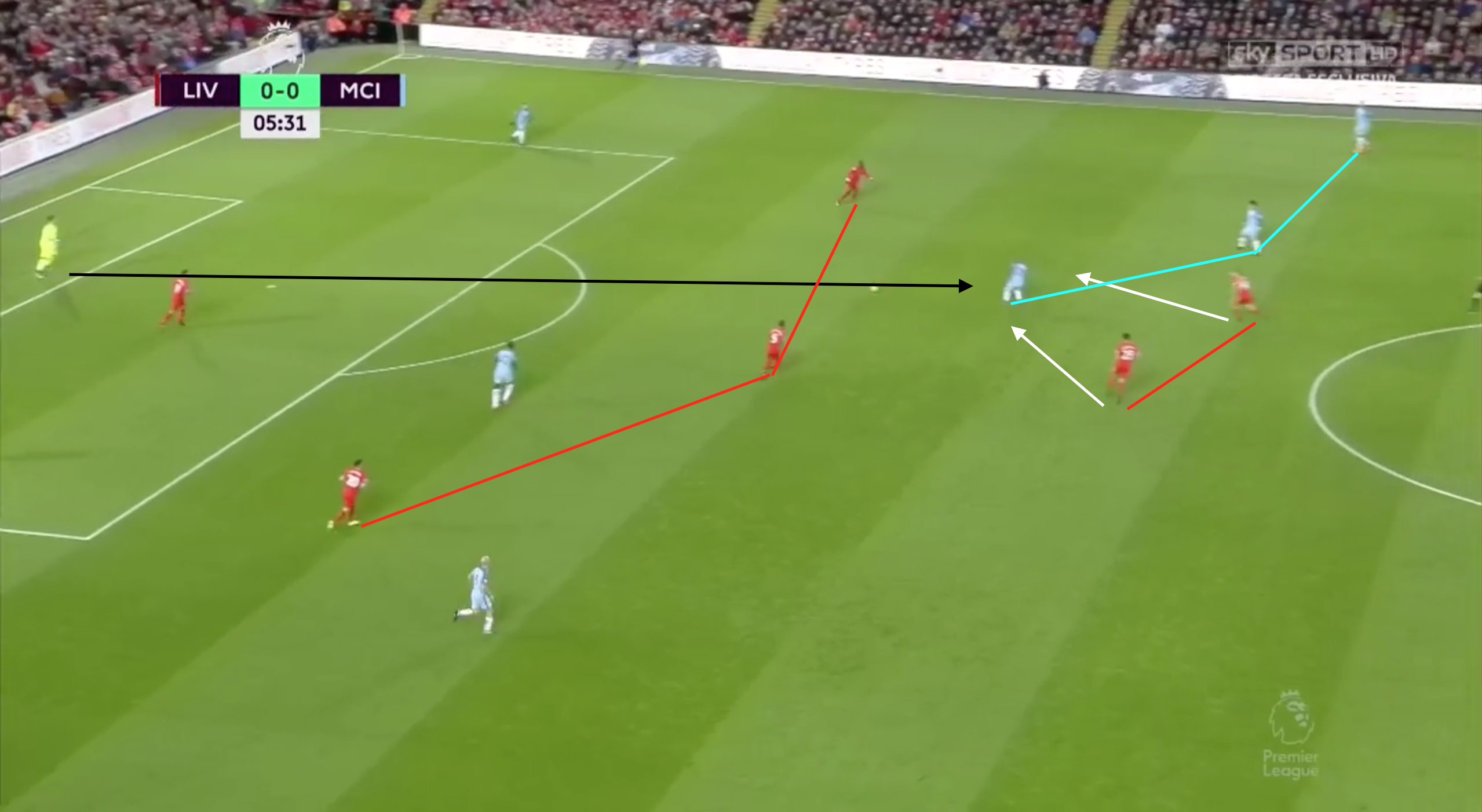 Now we see the second phase in action. The retreating Fernandinho gets into a position to receive the ball facing his own goal and Bravo plays a pass through the Liverpool press and into his feet. But you see both Emre Can and Jordan Henderson pressing the City midfielder. In this picture it looks as though City can play their way out of this with three players on their left hand side and not a red shirt in that area. If Fernandinho players that pass first time then they’ve bypassed the press. 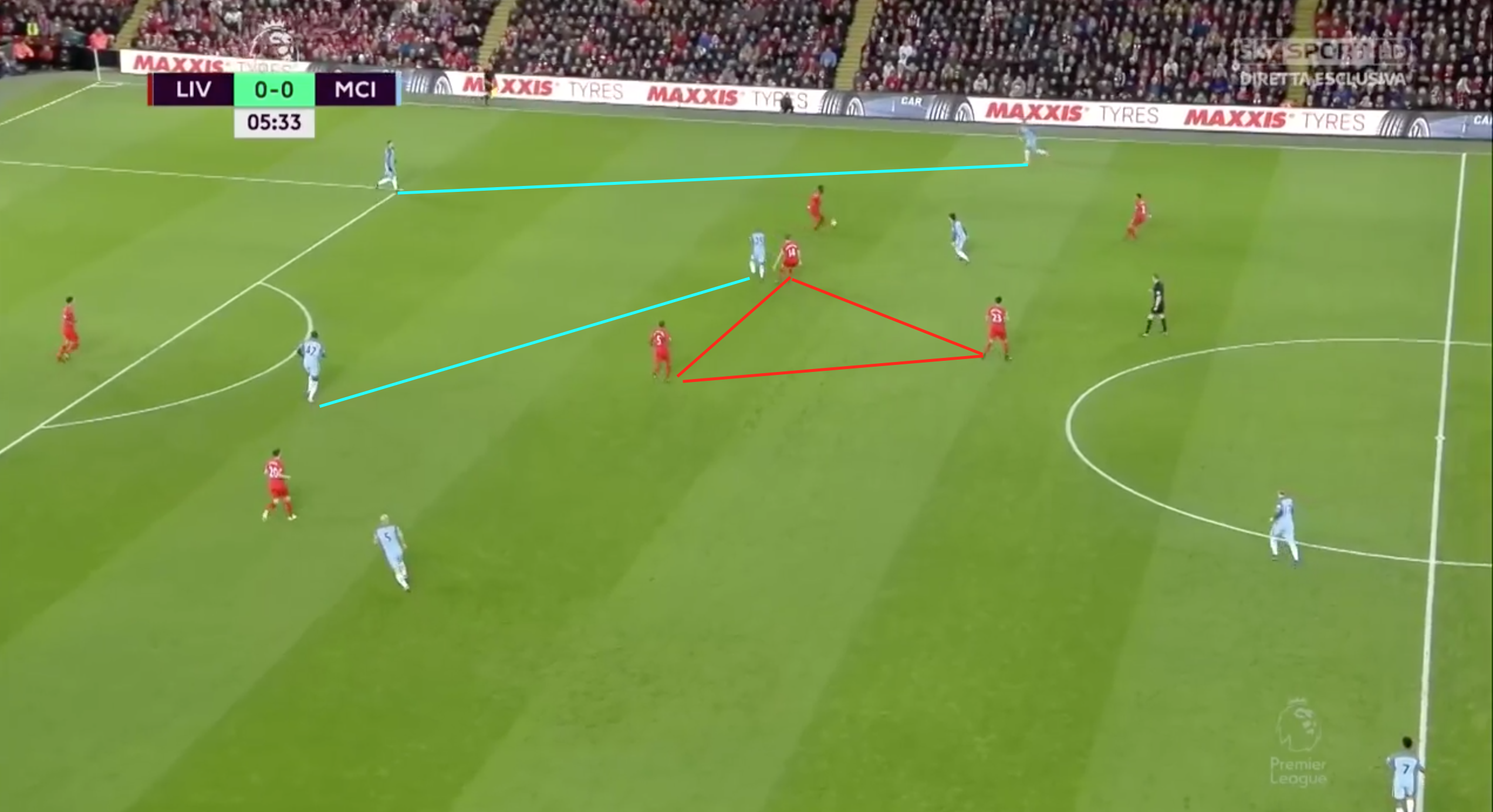 However, the City midfielder isn’t able to do it. Jordan Henderson snaps into the tackle and wins the ball back. One tackle and the balance shifts. Liverpool now have their three centre-midfielders in a triangle well inside the City half with both Mane and Clyne supporting. Compare that to City whose midfield pair is stretched and Otamendi is isolated due to Kolarov pushing on to offer width during the attack.

Liverpool now have the extra man on that outside of the pitch. 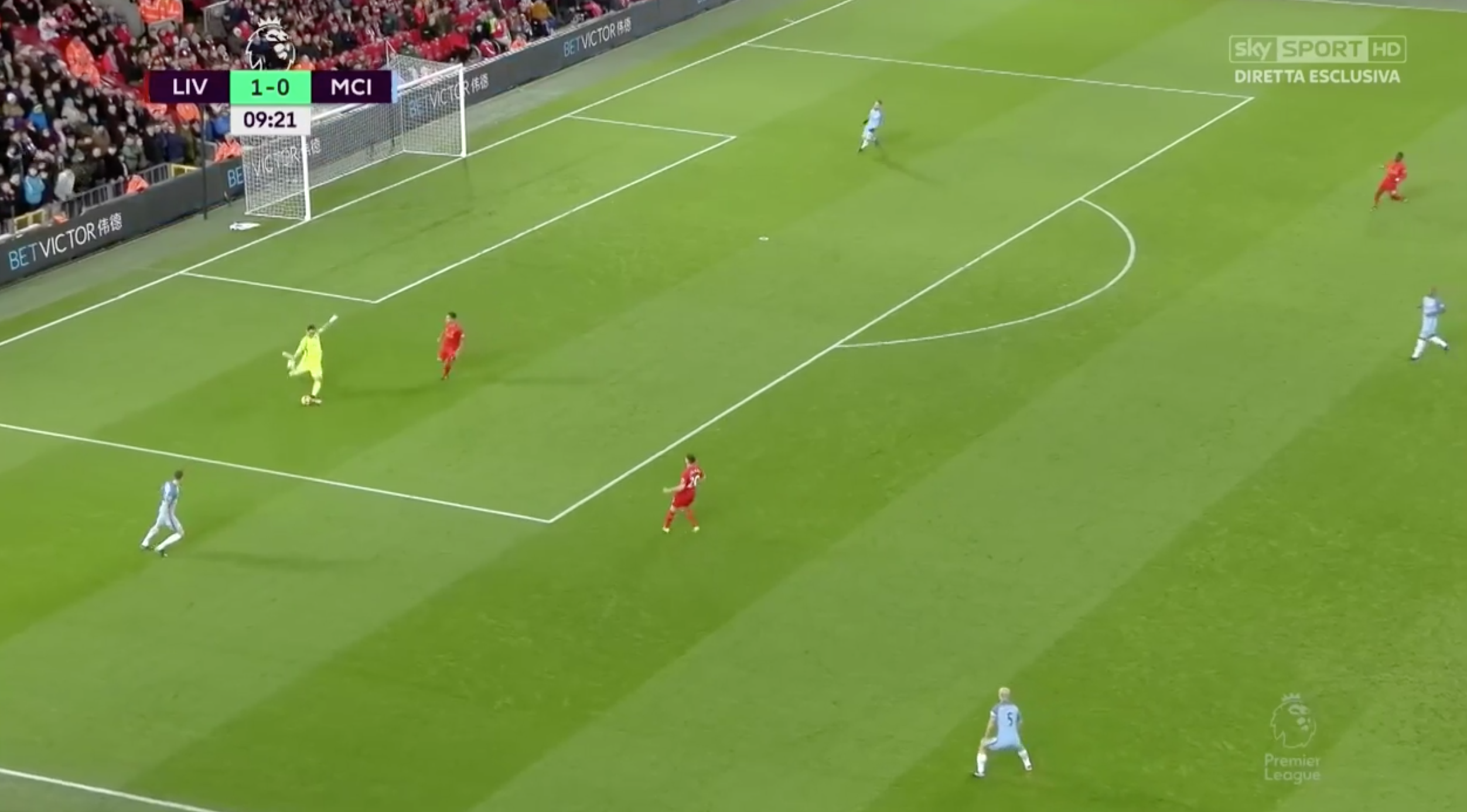 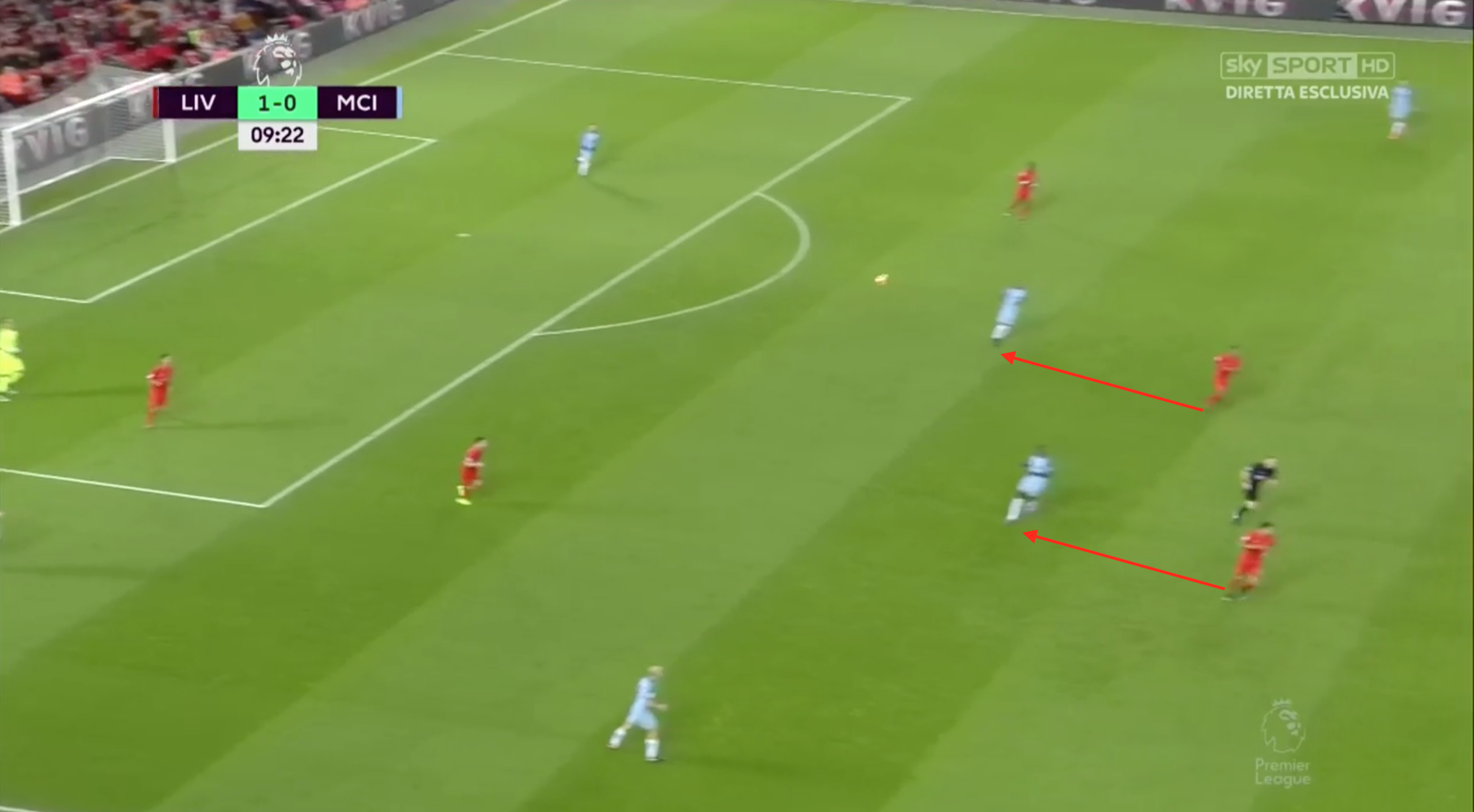 In the two pictures above you see the second phase of pressing again. Firmino, Mane and Lallana have pressed the backline and Bravo kicks it long. As the camera pans out to follow the ball you see the City midfielders had dropped back but both Wijnaldum and Can had tracked them. Again it’s 6 v 5 in City’s favour but because of the positioning and the discipline of the five Liverpool players, the away side are forced to go long to an area where it’s 5 vs 4 in Liverpool’s favour.

It was perfect from Klopp and the players.