There has been enough talk about a Liverpool revival as the Reds beat Spurs 2-0 at Anfield last Saturday to end a wretched run of form that saw them pick up three points from five Premier League games from January till the first week of February.

One wouldn’t disagree when you say that the talk has been spurred by the reunion of the Reds’ best attacking. Since the game against Watford on the November 6th, the game against Hull on February 4th was the first time that all four of Philippe Coutinho, Sadio Mane, Roberto Firmino and Adam Lallana were on the pitch at the same time. Injuries to Lallana and Coutinho and Mane’s involvement in the Africa Cup of Nations meant that Liverpool’s most potent threat was taken away from them.

But just how important are they? The numbers say they are imperative to the team doing well. Those numbers will be looked at later in this piece, but first, we take a look at how the Reds play with and without the front four.

Since November, it has always been that one of the four has been out, and for sometime in the beginning of January, two, with both Mane and Coutinho missing.

Jurgen Klopp’s most used reaction to missing one of the front four has been to put Gini Wijnaldum and Emre Can in midfield and starting with the remaining three as the attacking players.

That hampers the way that Klopp has set his side out to play. With our system, Lallana is incredibly important to the way we play, both on and off the ball. When not in possession, Lallana is almost always the trigger for the press. When he isn’t, and Firmino does it in front of him, he’s always the first one to go up in support.

Now, when one of the four is absent, Firmino would still trigger the press, but with neither Can nor Wijnaldum backing him up as much as Lallana usually does, the pressing went haywire.

For a side with a defense as uncertain as Liverpool, the rearguard needs as much assistance as they can get from the players in front of them. With the hustle and bustle of the early part of the season, when the front four operated together, there was still uncertainty, but sides couldn’t play through us, as they have done freely in recent times.

Two examples spring to mind. Both happened in the game against Swansea at Anfield last month. Coutinho, Firmino and Lallana played, but Mane was away in Africa. That meant Can and Wijnaldum played with Henderson in midfield, with Lallana on the right wing. 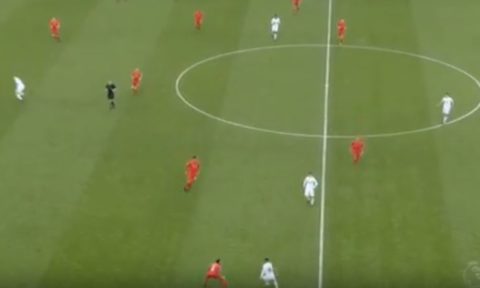 The above picture shows Tom Carroll in possession, with Firmino and Can in close quarters. Olsson is looking for the overlapping run and Clyne seems to have that covered. 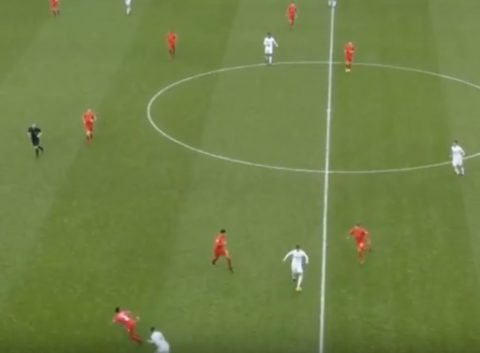 Can and Firmino get closer and really attack Carroll, but he gets the pass away to Olsson. 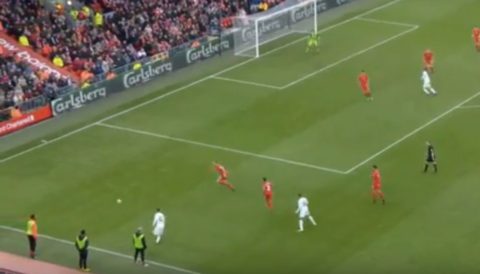 The above image is from 10 seconds later. Carroll has been allowed to get away and he is literally at the by-line with space to cross. He provided a perfect cross for Llorente to head home.

Can is the man tracking Carroll at the beginning. He has to do one of two things – either track Carroll till the end, or communicate and pass him on to someone else. Carroll finds himself in so much space that Jordan Henderson has to go out and make a desperate attempt to stop him.

For the third goal that Swansea scored, it was a similar mistake, but instead of Can, it was Wijnaldum who was at fault then.

That is where Can has to develop if he has to make an impact with this system. He switches off just far too often. With Lallana, you can be sure that along with the effort and the running, the concentration in his defensive work is pretty steady.

Also the presence of the front four allows the full-backs a little bit of breathing space, especially James Milner. When everyone is fit, it is generally Coutinho who plays ahead of Milner on that flank. The opposition players on that flank have to be wary of what Coutinho is capable of, so they are not bombing forward as often. When Milner is put under pressure defensively, he becomes slightly reckless. He dives in, he runs in to win balls has no hope of winning and then gets caught out for a lack of pace.

The numbers extensively support the fact that Liverpool need their front four fit and firing at all points. In the 25 Premier League games this season, the front four have played together in 13 games. Liverpool have 32 points from those games, with 10 wins. They lost against Hull, apart from draws with Tottenham and Manchester United early in the season. In those 13 games, we have scored 32 goals and conceded only 14.

This is an attacking unit unlike any the club has had in recent memory. The best that we had had until this season was in 2008-09 when the industry of Yossi Benayoun and Dirk Kuyt served the class and ruthlessness of Steven Gerrard and Fernando Torres.

One can only hope that the training camp in La Manga and the two-week break has helped everyone recharge their batteries. Starting at Leicester next Monday, Liverpool need to be at the very top of their game, for the 13 more challenges that follow in the Premier League.