Liverpool’s win over Arsenal on Saturday was filled with a lot of standout performances and memorable moments. Sadio Mane was rightly lauded for yet another goal, Roberto Firmino looked back to his best and Adam Lallana was praised for the fact he was practically everywhere throughout the match.

Reds boss Jurgen Klopp even reserved special praise for the latter in his post match interview.

“When we are compact, it is really nice to have Adam because he jumps out of compact formations and triggers the pressure or sets the tone”
“The problem is in a few games when we have not been compact and Adam does the same, he opens a gap for the opponent, then it’s a one-on-one in a big area. Stability is the base for everything and we wanted to be stable. We worked really well in these parts together and Adam, it is nice to have him in this role.”

It was a reminder from numerous players that they do have it in them to replicate their early season form and their performances as of late are not the norm. One player whose contribution in the 3-1 win went under the radar was Emre Can.

The German has come in for a lot of criticism lately for a variety of reasons. Some fans dislike him because James Pearce of the Liverpool Echo claimed he was asking for more than the club were willing to offer. Others simply think he’s not good enough and doesn’t warrant the hype that surrounds him. Their mind was well and truly made up and you’re not changing it anytime soon so it’s foolish to even attempt to do so.

He undoubtedly struggled in the defeat to Leicester City but what Liverpool player didn’t? It’s all about how you bounce back and did so emphatically to put in yet another eye-catching performance against one of the top four rivals.

He put in a performance against Manchester City in the 1-0 win and then was arguably the Man of the Match in the 1-1 draw with Manchester United. He’s now added to those two performances with one against Arsenal at the heart of the midfield in the absence of captain Jordan Henderson. 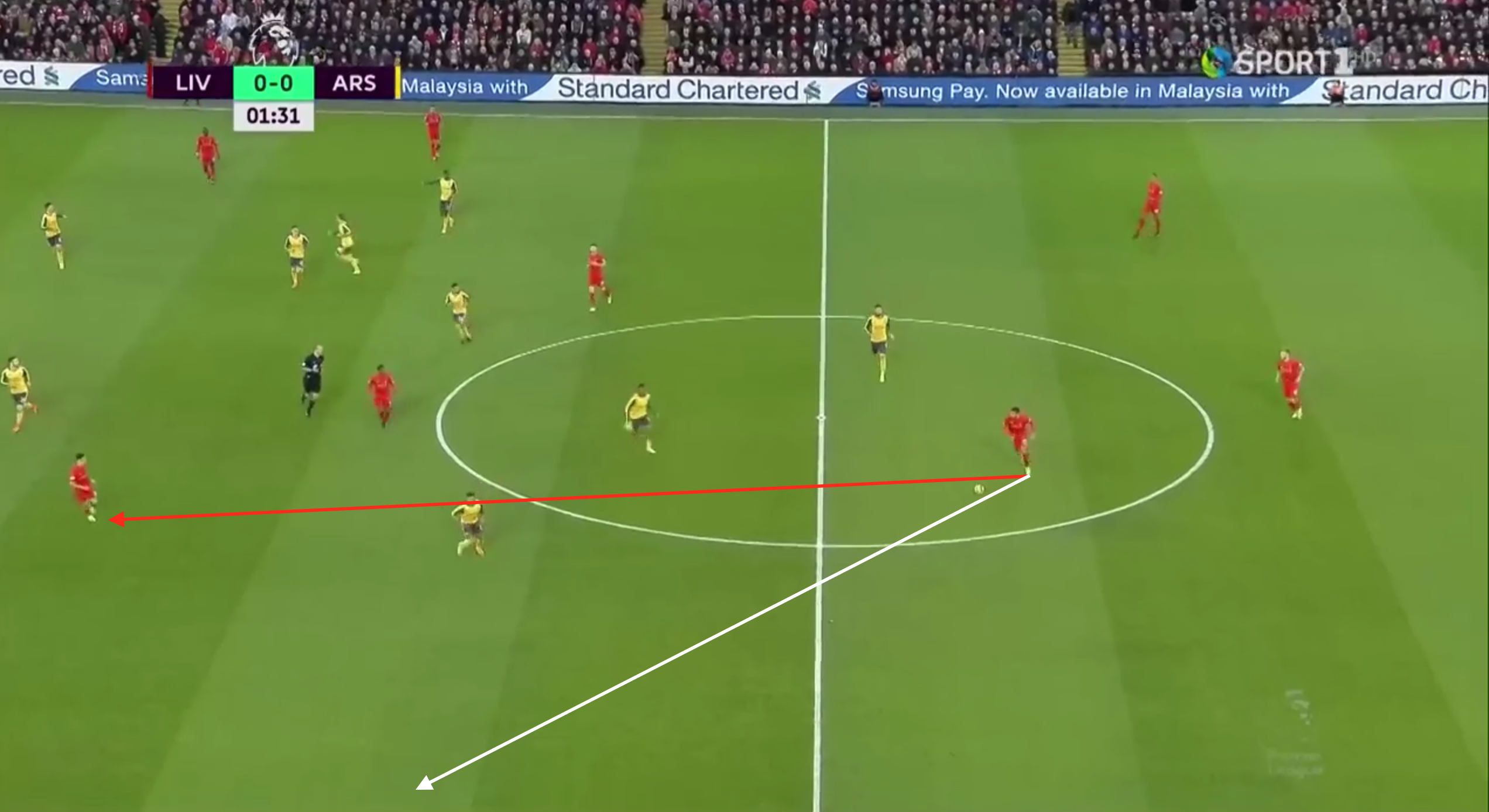 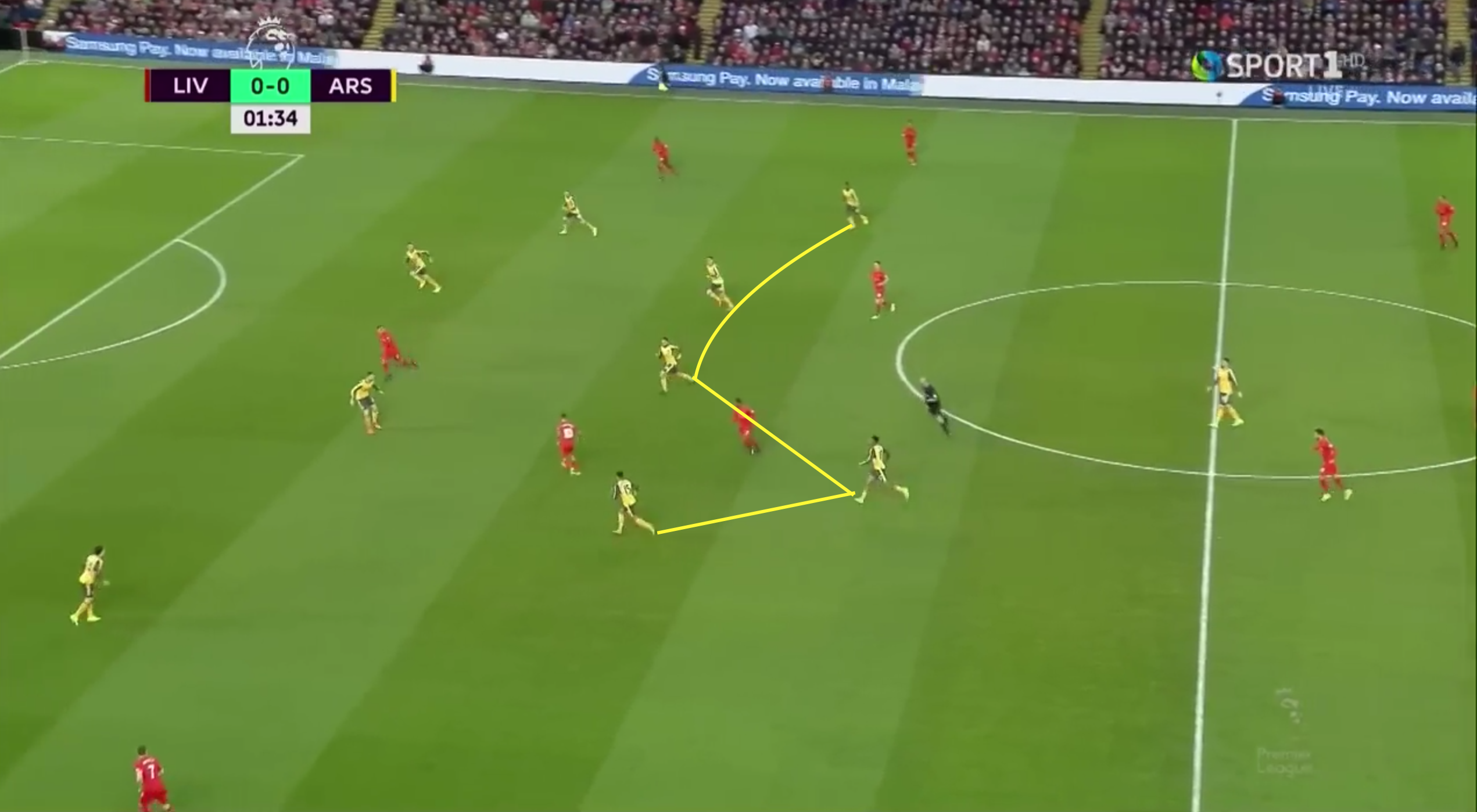 In recent weeks the Reds have been accused of being too safe with the ball. Moving the ball side-to-side with no clear purpose and lacking the intensity and the bravery to break teams down. But in the pictures above, taken just 91 seconds into the match, you see that there’s a desire from the German midfielder to break the lines and get Liverpool onto the attack and at the Arsenal defence.

He picks the ball up off the centre-backs and instead of just playing a pass to the left, highlighted by the white arrow, to James Milner he instead plays a pass through the heart of a disjointed Arsenal midfield straight to Philippe Coutinho.

The Brazilian has dropped off from his attacking role to pick the ball up, he turns on it and pokes a pass to Firmino and Liverpool in a corner early on. It all stems from Can being direct when in possession. 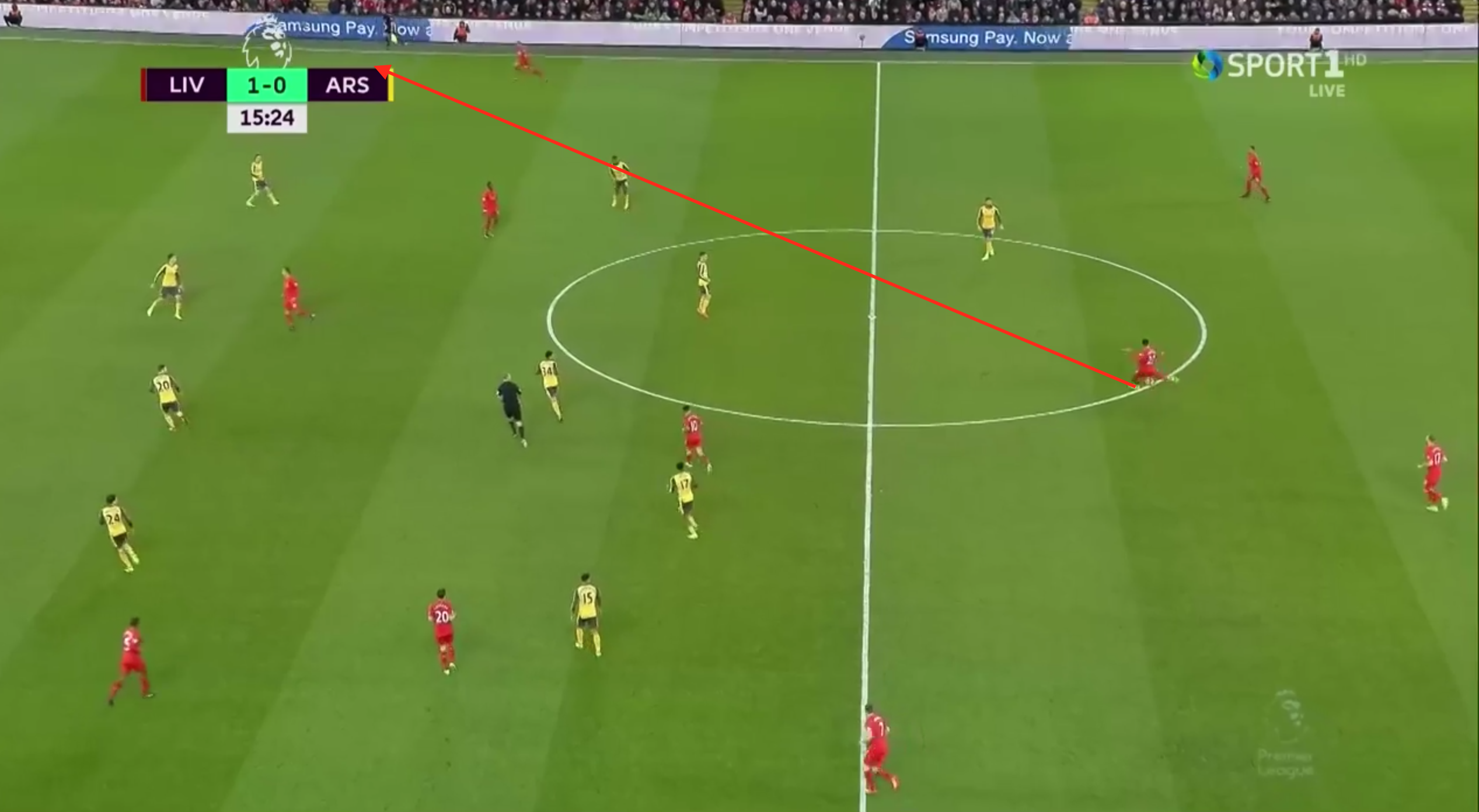 In the picture above you see that, for once, Arsenal have bodies in decent areas of the pitch to cut-off any dangerous passes. There’s perhaps an overload on the left, with Gini Wijnaldum, Lallana and James Milner all on that flank but Can ignores them and plays a switch to the advancing Clyne.

The full-back wasn’t tracked and Arsenal go from having all ten outfield players behind the ball to having Nacho Monrel one-on-one with the Liverpool right-back. It results in the former Southampton man winning a corner. Can’s passing range and execution created that. 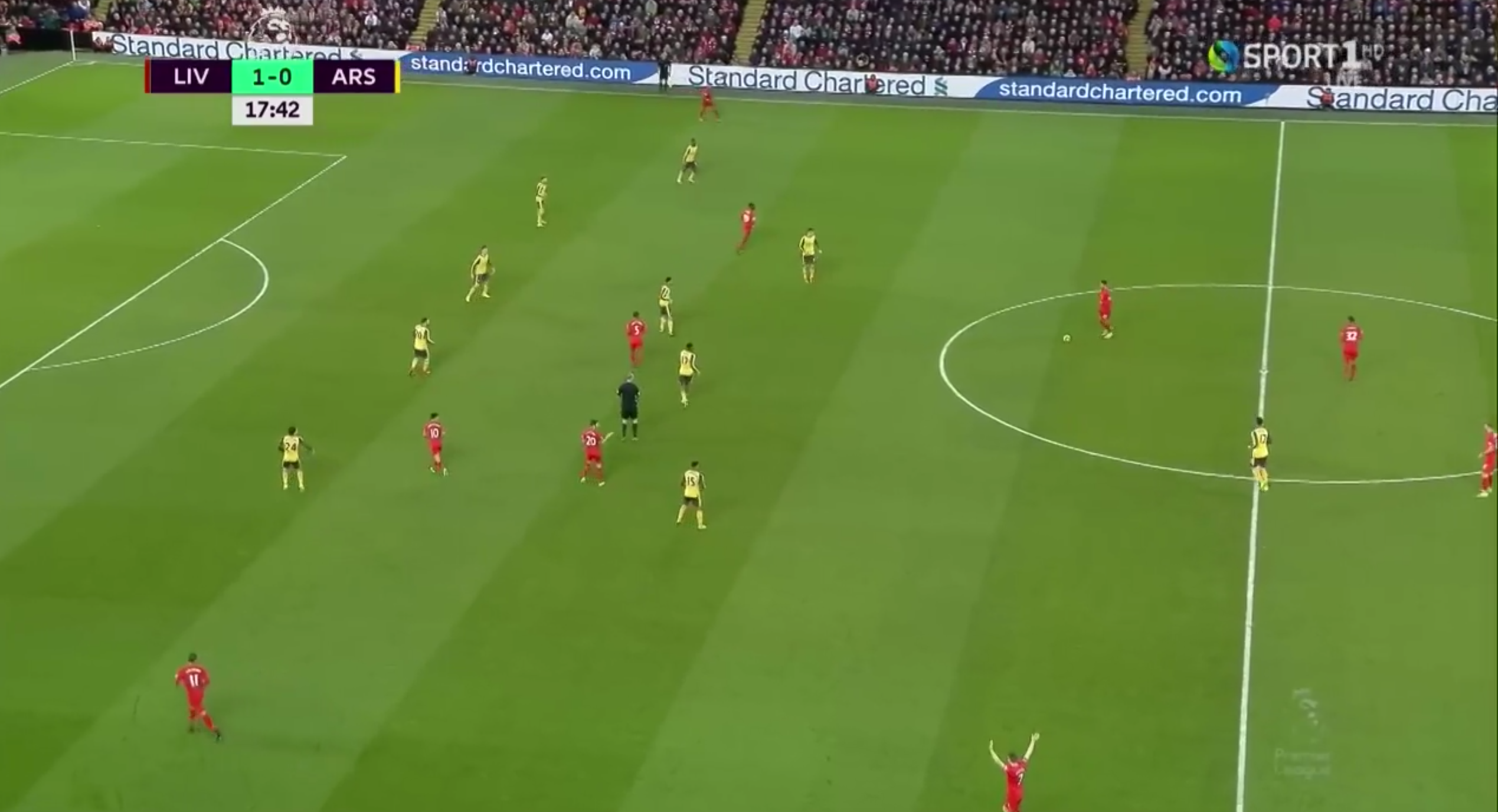 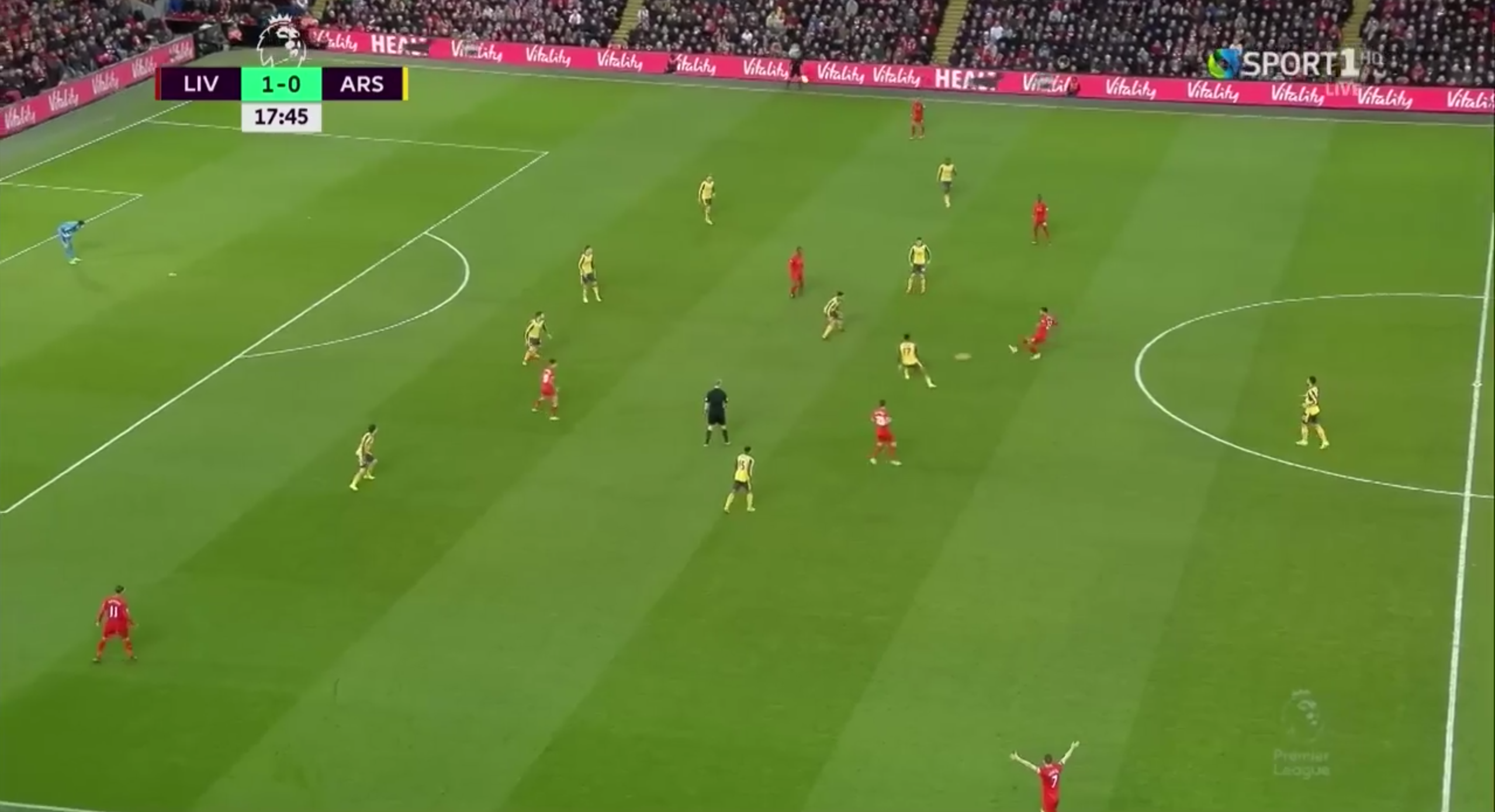 This time around the former Bayer Leverkusen man picks the ball up in a deep area and has options. He could play a ball into the channel for Firmino, who finds himself on the left of the attack in quite a bit of space. He could switch the play to Milner or look to play a ball down the right to Clyne. All of these options are progressive but are any really incisive?

Instead he takes it upon himself to drive forward into the space ahead of him and this engages the Arsenal midfielders and they vacate their position from within their line and this creates space.

Can then exploits the space he’s created, after Iwobi breaks from the line to put him under pressure, to thread a ball through to Coutinho. The former Inter Milan man takes a rogue touch and the Reds don’t make the most of the opportunity. However, it goes to show how Can’s incisive and decisive mindset helped the home side cut Arsenal apart time and time again.

He’s inconsistent, but again, what Liverpool player isn’t? At 23 years old he still has a lot of room to grow. Giving up on him seems premature and it’s a head scratcher when people say they’d sell him without hesitation, especially after seeing performances like the one he put in against Arsene Wenger’s men.