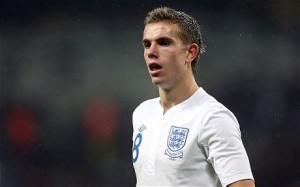 Much has been made of the apparent inflated price Liverpool have paid for Jordan Henderson, believed to be in the region of £16m.

Let us step away from the price tag for a moment, particularly as he has yet to kick a ball for his new club club, and consider the most telling statistic about Henderson’s 2010/11 season, that of his chance creation (tweets from OptaJoe here and here):

Chance creation gives us a much better idea of a player’s contribution to his side than assists, for the simple reason that it’s not dependent on attacking competency. Season after season, assist charts are dominated by players from top teams, since they’ve had the likes of van Nistelrooy, Henry, Drogba and Ronaldo to ‘complete’ the assist.

Chance creation – a pass that leads to a shot on goal – is hardly a perfect statistic in itself (what about dangerous crosses that finds no one?), but it is much better than sight-based biases in player assessment.

Is creating an abundance of chances a formula for success, and worth the millions that Liverpool have spent? On first glance, perhaps not (click to enlarge): 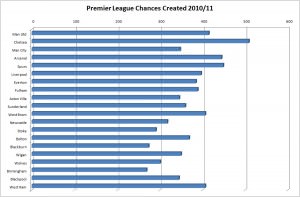 Whilst there is a downward trend in chances creation with respect to league position, there appear to be plenty of exceptions, namely Man City, West Brom, Blackpool and West Ham.

Clearly, creating chances in itself is not a prerequisite for success, if relegated West Ham can tally only 8 fewer chances than champions Manchester United all season.

The issue returns to attacking competency. If two teams have equally good attackers, does the team that creates more chances collect more points over the course of the season?

To test this, a model with a measure for attacking ability needs to be formed. I’ve chosen to use chance conversation rates; that is total assisted goals over total chances created. This ranges from 14.5% with Manchester United to 5.8% with West Ham.

The brains behind Liverpool’s transfer policy, Damien Comolli, will have an even better idea of the returns on chance creation. He is of course good friends with Billy Beane, the man whose revolutionary method of valuing baseball players has now been immortalised in film after Michael Lewis’ bestselling book Moneyball. Simon Kuper’s recent FT column reveals how data drove Liverpool’s purchases of Andy Carroll and Luis Suarez; to call the article ‘fascinating’ would do it a disservice.

Of course, ‘adding’ chances to Liverpool won’t yield returns unless those other variables – attacking competency and passing and defensive ability – are equal to that of their rivals. Over the course of the 2010/11 season, they fell short of the top four in all these aspects, but the numbers are skewed by Roy Hodgson’s tenure at the club.

Comolli and Dalglish must believe that in Carroll and Suarez they have a partnership as clinical as any other in the division, and that the team can also hold their own in other aspects of the pitch. If not, then the additions of Jordan Henderson, and potentially Stuart Downing and Charlie Adam, may well be money foolishly spent.

It may be a simple and obvious message – creating more chances for good strikers leads to a higher league position – but it’s an important element to Henderson’s game that has been forgotten in amongst debate over his transfer fee.

This post, along with other articles by the author, is available on 5 Added Minutes.