Mané’s importance to the team has been clear right from the word go at Liverpool.

Scoring 13 goals and registering seven assists in 31 Premier League appearances, the Senegalese international needed no bedding in period to make his mark at Anfield and establish himself as a fan favourite.

A fiery goal on his competitive debut against Arsenal is testament to that, showing off his pace to cannon past the defence before smashing the ball into the corner. That was followed by a rather humorous celebration with Klopp, too.

Scoring against The Ev didn’t do him any harm, either, coasting past one defenders and then another and another, showing quick feet to roam free and thrash a shot beyond Robles. Queue another special celebration.

Jetting off to the African Cup of Nations before picking up an untimely injury in the Merseyside Derby was therefore inevitably going to hit Liverpool’s momentum hard. Previously known for their attacking verve and brilliance, The Reds laboured in his absence, stuttering over the finish line for a top-four spot with six goals in eight games. There was no pace, no directness and far too much predictability to their game, resulting in some very, very turgid football.

Clyne became the main out-ball down the right-hand side while James Milner’s incessant need to cut inside from the left only exacerbated issues for Klopp, while making every fan tear out their hair in frustration. Life without Mané was pretty tough.

This season’s been pretty much the same story thus far. Switching to the left-hand side to accommodate Mohamed Salah in a 4-3-3 formation hasn’t deteriorated his effectiveness, with the 25-year-old continuing to show pace, power and precision to bulldoze his way past opposition defenders.

At the time of writing, Liverpool have played three games of the season so far – with Mané scoring in the opening clash at Vicarage Road after some brilliant work from Emre Can in the middle of the park. While not getting on the scoresheet against Hoffenheim in the first-leg of the Champions League qualifier, the Senegalese international was a constant menace once more, earning the vital free-kick that resulted in Alexander-Arnold’s match winning goal. Most recently, Liverpool faced their bogey team, Crystal Palace, and seemed set for another frustrating afternoon at Anfield.

Dominating the ball but showing little in the way of creative breakthroughs, the away side looked relatively comfortable, sitting deep to cut off the supply lines and diminish the space. It seemed for all the world it was going to end in a stalemate before Mané stepped up to score a crucial goal in the second-half. Combining well with new signing Dominic Solanke, he poked home from close range to cement what has been a sublime start to the season.

“If you’re asking me who is Liverpool’s most important player at the moment, it’s Mané. He gets more goals. He is more threatening. The end product is more about Mané.” – Graeme Souness

He’s always looking to make something happen and that buzz and energy he brings onto the pitch would frighten even the very best of defenders. Whether you jump into the tackle and look to give him no time on the ball, or sit off and buy your time, Mané will more often that not make a mockery of you. He’s added an extra dimension to the attack and is now the nucleus to Liverpool’s cell; the engine to Klopp’s car.

Coutinho’s absence has undoubtedly been a blow, with the Brazilian embroiled in a transfer saga over a possible move to Barcelona this summer. Submitting a transfer request on the eve of a new Premier League campaign was disrespectful to say the least, but the club stood firm in their stance and look set to keep him for at least another year.

We’re all grateful for that, with Coutinho one of the very top players at the club. He can turn a game on it’s head in an instant; he can rifle one into the top corner and he pick a pass like no other. Keeping the Brazilian was key to the club’s vision for the current campaign, while also sending a message to supporters and other clubs that we aren’t going to part ways with our prized assets so easily.

However, it’s Mané that the system depends on. When he’s in the team, Liverpool are exhilarating and enthralling to watch, but when they don’t have him in the team, it makes for much more uncomfortable viewing. None of Henderson, Can or Wijnaldum have the creative spark that Coutinho can offer, but the team can move forward in his absence – something they failed to do last year without Mané. 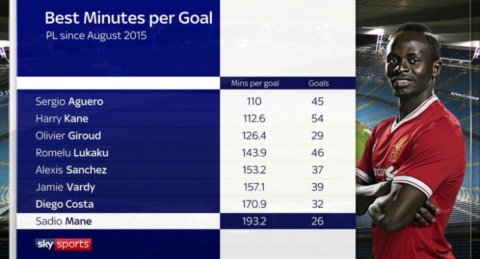 The 25-year-old’s goal ratio for a wide player is phenomenal – scoring 26 goals in the Premier League since 2015 with a minutes per goal ratio of 193.2 that ranks him eighth. All those ahead of him are top strikers, emphasising just how good Mané’s end product is.

Adding another dimension to the attack, he brings out the best in those around him. Such spontaneity and ability to beat defenders down the flank or through the middle see Mané as the most important cog in Klopp’s side.

Tying him down to a new contract would be a wise move – particularly one with no release clause.