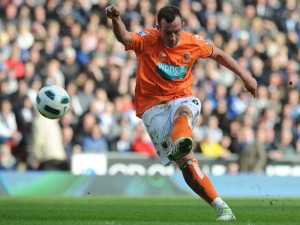 Last month’s piece on the value of chance creation over the course of a season showed that there is some logic behind Liverpool’s decision to respectively sign and target Jordan Henderson and Stewart Downing.

Does the rationale extend to Charlie Adam, the Reds’ latest purchase? Although creating a healthy 64 chances in the league last season (Downing 85, Henderson 82), 45% of these came from set pieces (Downing 31%, Henderson 40%).

The original analysis focused on total chances created; that is those from both open and set plays. Unsurprisingly, the majority of chances created in the division last season were from open play.

The striking non-relationship between league position and total set play chances created is validated by a near-zero correlation when set play chances are instead plotted against total points collected in the season.

Modelling the relationship between set plays and points collected – whilst holding constant attacking ability amongst possession and defence-based variables – confirms that creating more chances through set pieces adds absolutely nothing to your points total over the course of the season.

The ineffectiveness of set pieces has been written about in detail by a number of bloggers, and these two pieces are certainly worth a read:

Teams converted on average 7.5% of all set piece chances in the league last season, compared to 9.9% of open play chances.

The numbers all suggest that signing Charlie Adam primarily for his set piece ability is misguided, as it adds limited value.

Yet everyone has seen Adam’s ability striking a dead ball; Tangerine Dreaming points out the specifics of his talent:

He is excellent at delivering set pieces. Wide free kicks are better delivered from wide on the right hand side and generally hits them just above head height swinging inwards. His free kick delivery from wide left have a tendency to be hit low towards feet and behind the defensive line, swinging away from goal. He generally takes the majority of his corners from the right side, in-swinging, although has a tendency to over hit the ball. His striking of the corner can be inconsistent with a scuffed low and running corner being the key fault. His goal against West Ham was scored in this fashion, but it wasn’t deliberate as his celebration would confirm.

The numbers I’ve analysed do not include goals from direct free kicks or penalties, situations that Adam equally enjoys. It may be that Adam creates ‘better’ chances from dead ball situations, though no such measure of chance quality exists.

Soccer by the Numbers also highlights Blackpool’s remarkable efficiency from corners last season, and whilst this cannot be entirely attributed to Adam, there’s no question he played an important role in this source of goal creation for the Seasiders.

Sir Alex Ferguson meanwhile felt that Adam’s corners were worth “£10 million”, though as the original recording of the interview shows, the comment was perhaps more light-hearted than it was later made out to be.

Charlie Adam may well create an abundance of chances from set pieces for Liverpool next season, but the numbers suggest this will do the side little good. That said, he has the ability with a dead ball to affect that great intangible: momentum. An inch-perfect corner onto the head of Andy Carroll in the 90th minute of an important game is not an inconceivable scenario, and it is those types of moments the numbers do not account for.

When it comes to set pieces, the question is do you sign a player for those moments, or what he may add on average over a whole season?

This post, along with other articles I’ve written, is available on 5 Added Minutes. You can also follow me @OmarChaudhuri.