Another game has passed and the mighty Reds fired blanks yet again. Somehow the ball didn’t go in Spartak Moscow’s net a second time. The mixture of feelings after such is hard describe. LFC managed to fight back after going 1-0 down. The result is not fatal in any way – reaching the knockout phase is still fully in our hands. The build up play was very good. And yet you can’t help but feel we let one slip away as we have done many times over the last year.

No team has won more points from behind in the Premier League since the start of last season than Liverpool. The Reds have managed to win points 20 points after going behind. Brendan Rodgers used to talk a lot about character at the end of his reign but we didn’t this kind of resilience in the squad, he managed  in his last season. Jurgen Klopp has managed to install a never say attitude almost the same group of players (not that getting rid of deadwood and bringing some great talent didn’t help). The German’s team is designed to attack – heavy metal football he said. And like on a rock concert you find yourself jumping and screaming at the TV, if you aren’t lucky enough to be at the stadium. But the screaming is not always inspired by joy – LFC have also dropped 20 points from a winning position over the last two seasons, way more than any other top team. 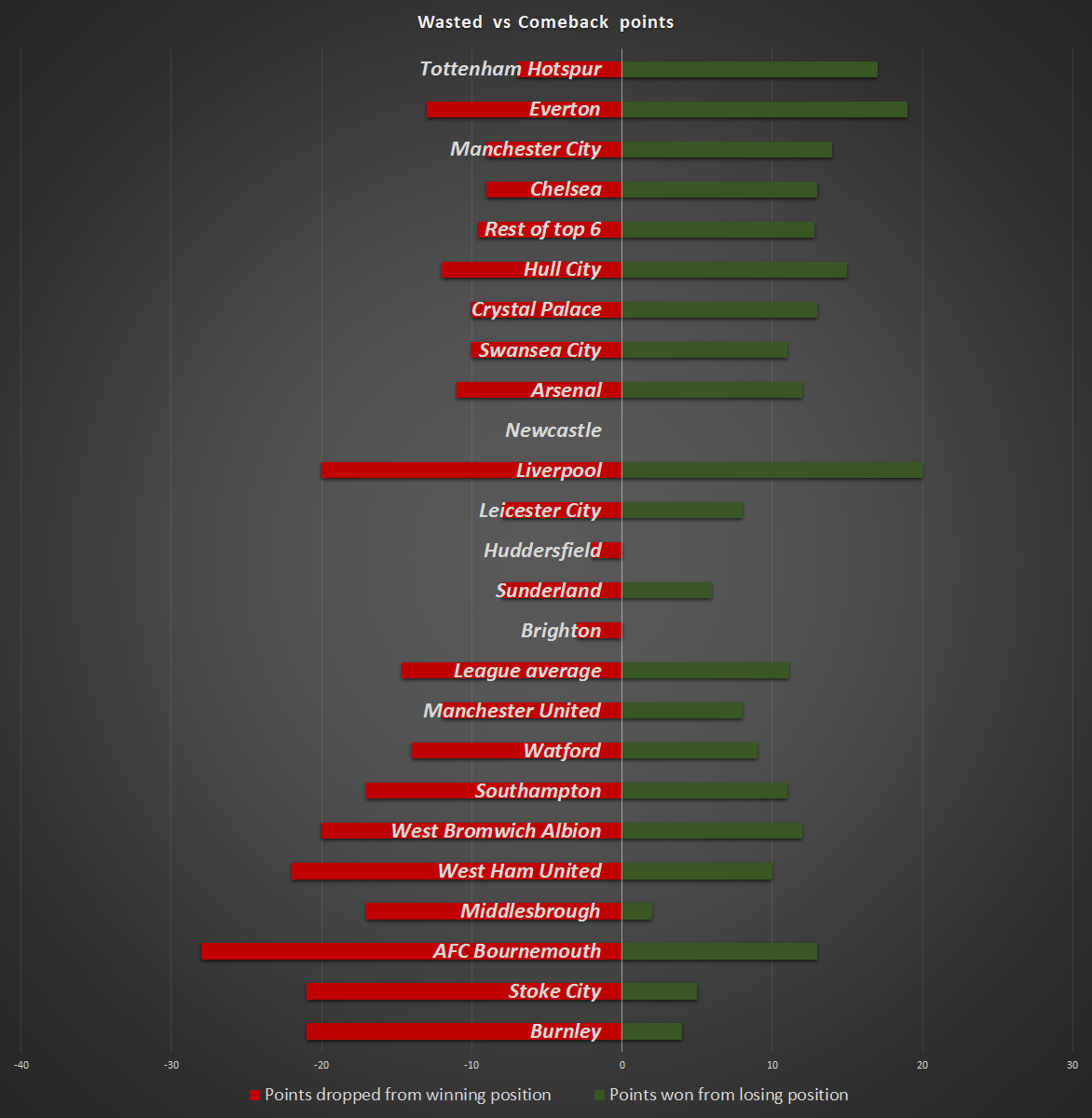 We have played 44 league matches over the last two season – 10 times we come back from a winning position to win some points (5 wins and 5 draws), on 9 occasions we were leading and ended up with less than 3 points (7 draws, 2 losses). 3 of those times were both leading and trailing, just to draw in the end – no other team has so many such matches. To be able to make a comeback, you need to find yourself chasing the game, and we are good at doing that. LFC was trailing at some point in 17 matches (39%). Chelsea for example have had much less opportunities to come from behind – just 11. Even at a per game basis however the Reds are elite. The below tables shows points per game won, when at any point of the match the team was trailing:

This a Jurgen Klopp team, that plays with a lot of emotion and is very good at attacking. A one goal lead is never safe against us. The other side of the coin doesn’t look nearly as good. Only four teams have dropped more points than the Reds from a leading position – Bournemouth, the only team to not win after leading by 3 or more goals, West Ham, Stoke and Burnley. Not exactly the company we want to be in. The next worse top 6 team is Manchester United, who have dropped 12 points after taking the lead.

The only time LFC didn’t win when leading by two was 4-3 loss to Bournemouth. One of only three times when a team up by two goals ended up losing over the last 44 Premier League matchdays. However that is more of a fluke. The most evident problem the number suggest is our problem to close out matches, when leading be a single goal. The Reds are continuing to suffer from this problem this season – the draws to Watford and Sevilla came after late equalizers erased our fragile one goal lead.

Our defensive issues have been well documented – crosses, set pieces, second balls, brain farts. So it’s no surprise that the LFCs’ defense has issues closing out a game when the opposition sarts hoofing the ball up in the dying minutes of the match. This creates chaos and the Reds are not very good at dealing with it. Four of those seven draws came with equalizers after the 80th minute after either a set piece or a long ball. With not enough time for a reaction LFC has to make do with a point. The per game numbers reflect that:

First of all – shout out to Rafa Benitez – yet to drop any points from a leading position after coming back in the top tier. Looking at LFC in terms of defending leads we are closer to Sunderland and Hull than we are to Spurs or Chelsea, which says enough. Some league success might be achieved even with this tendency (if you count making top 4 as a success) but winning trophies and especially cups is highly unlikely. Allowing an away goal in the Champions League knockout stages, if the Reds make it, might prove to be the difference between progressing and finding something not so exciting to do on week nights.

Get your pacemakers and blood pressure pills

The sample size is significant enough. We are seeing the same tendency this season. The difference with last year is we should be much better going forward once our midfield and attack settle. In any case we are in for another season of nail biting, euphoria and occasional (hopefully) rage. Just the perks of being a Red.