Welcome back to the season so far in the Fantasy Premier League! In this part, we’ll look at the rest of the league… 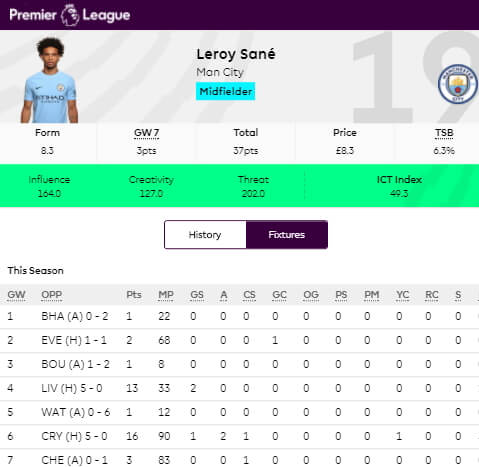 Manchester City have proven why they are backed to win the Premier League this season. Excluding the draw with Everton and the narrow win against Bournemouth, City have been flawless with 22 goals in their 7 matches (3.14 per game). City have however been hit with the injury of their prolific striker Sergio Aguero who was in scintillating form before his accident. They have a good selection of #FPL assets to step in and fill the Aguero gap; Gabriel Jesus has been no slouch in front of goal while Kevin de Bruyne and a resurgent David Silva have been at the forefront of City’s success. An outside shout would be Leroy Sane; the winger has already netted 3 goals in his limited playing time but looks world class on the pitch (only 6.3% ownership). Pep Guardiola has never been kind to #FPL managers, but with Aguero out, you’d have to assume more playing time for Sane. 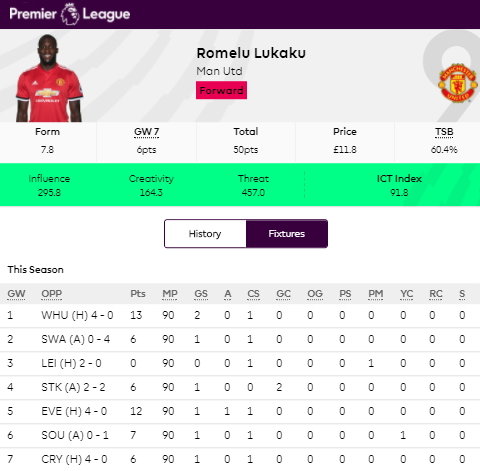 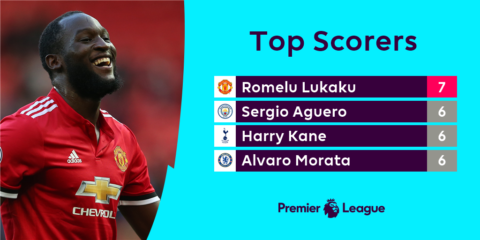 Manchester United have set the early pace in the league and have been devastating; destroying teams at will. United have kept 6 clean sheets and won 4-0 in four of their games. Goals upfront and a solid defence; United look to be the only challenger for City (the derby should be EPIC!). Romelu Lukaku has justified his price tag and hit the ground running; the striker is currently on top of the goal charts with 7 in 7 games. He’s proven to be a “must have” player this season but his teammates have racked up some good #FPL points so far. David De Gea currently tops the keepers (42 points) while Valencia (47 points) sits as the 2nd highest defender. Lukaku and United’s supply has primarily come from Henrikh Mkhitaryan with 5 assists for the season so far. Lukaku so far has proven to be a valuable asset in #FPL; with “bigger” teams to come, we’ll see if he maintains his form. For now, he cannot be dropped. 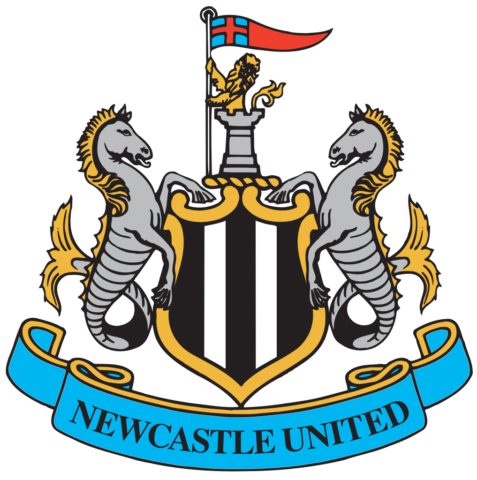 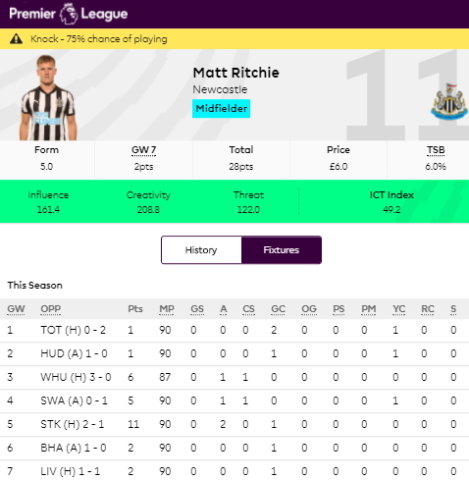 Newcastle have steadily grown into the season, 2 defeats were followed by 3 straight wins. Rafa Benitez has got his “limited” team clicking, turning St. James’s Park into a formidable venue to visit. Most of their attacking stems from Matt Ritchie who has assisted 4 times this season. The Scotsman provides an attacking threat in the team and is always involved in set pieces. 6% owned and at only £6.0 he’s definitely a budget option to consider. 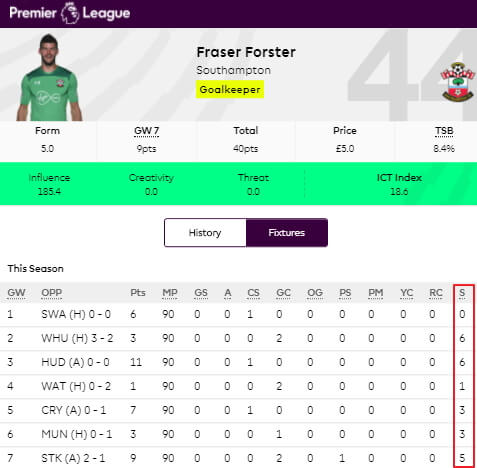 The Saints currently sit 12th with typical Southampton performances so far; solid defensively without being very strong up front. The only #FPL asset to consider would be Fraser Forster. Forster is currently priced at £5.0 and on 40 #FPL points. As mentioned above, Southampton are usually close to the top of the most cleansheets lists and therefore Fraser offers lots of promise. He also makes multiple saves which adds up (3 saves = 1 point); currently the 2nd highest #FPL keeper. Gabbiadini was the Southampton “man to have” last season but has been a shadow of himself. He could be one to watch out for, once he gets going (£6.7) 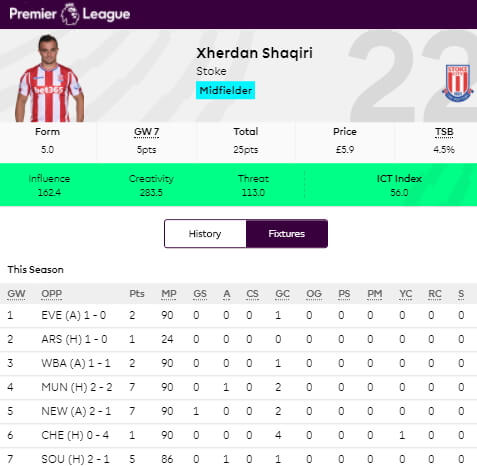 Stoke are another team who have just gone about business as usual. An impressive win over Arsenal in GW2 and draw against high flying United saw Eric Maxim Choupo-Moting burst onto the scene with 2 goals, which brought an influx of transfers in. Many managers are still holding onto him in the hope of him recreating the form of that United game, mostly because he only costs £5.6; that being said Xherdan Shaqiri only costs £5.9. If you’re looking at a Stoke option, possibly look into their defence. Zouma (£5.5), Cameron (£4.4) or Pieters (£5.0) 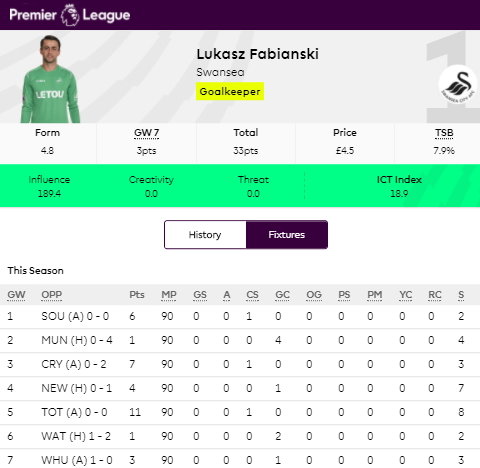 Swansea currently occupying the first relegation spot (early days) have had a disappointing start. Close losses versus Newcastle, Watford and West Ham have left the Swans in this predicament. Swansea have been resilient over the years and you’d have to imagine they could dig themselves out of this hole. Even though they’ve lost 4 games their keeper (Lukasz Fabianski) has been highly selected (7.9% ownership); another keeper who makes tons of saves which translates into points. Another to look out for is the prodigal son Wilfred Bony, once he gets going he’ll get goals at only £6.0. 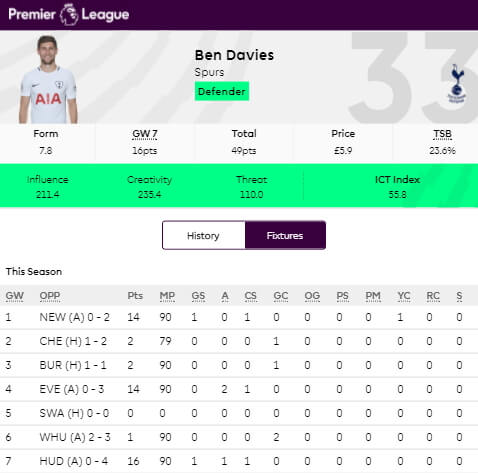 Spurs have a new temporary home this season as development continues at their new stadium. Their home games are played at Wembley which has proven to be their Achilles heel; away from home though they’ve been sensational. Harry Kane has been prolific since the days ticked over from August into September, scoring 6 goals all away from home. Kane has (as if he wasn’t before) become a must-have commodity in #FPL; the 2-time golden boot winner has to be a “shoe in” even at the lofty price of £12.7. Kane’s support in Dele Alli and Christian Eriksen also have good #FPL value, while in defence they have one of the brightest emerging stars in Ben Davies. The Welshman has made the left-back position his own chipping in with 2 goals and 3 assists for the season so far. Ownership is a bit high at 23.6% (£5.9) but you’d have to back him to get big points when he gets involved in the attack. 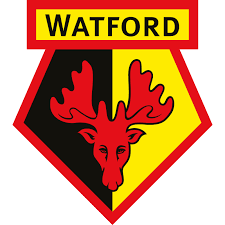 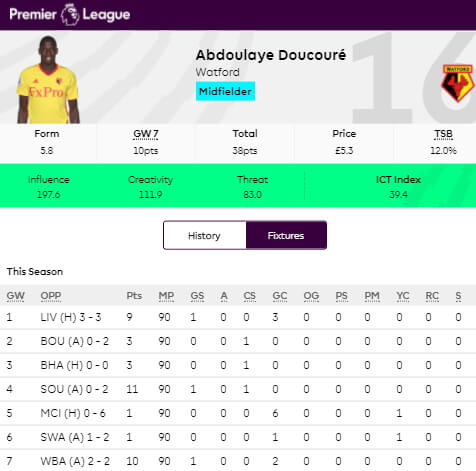 In Marco Silva, Watford have a very good manager who has guided the Hornets into 8th position in the league. They’ve only lost once this campaign while winning all but 1 of their away games. Watford have surprised many this season with fairly unknown #FPL assets stepping up. Richarlison de Andrade (£6.1) and Abdoulaye Doucouré (£5.3) have been low-cost players who have performed well. Consider either of them as they have been Watford’s driving force; perhaps the cheaper Doucouré as his output is similar and costs £0.8 less. They have a few tough fixtures to come: Arsenal (h) and Chelsea (a) but these players could be used in rotation. 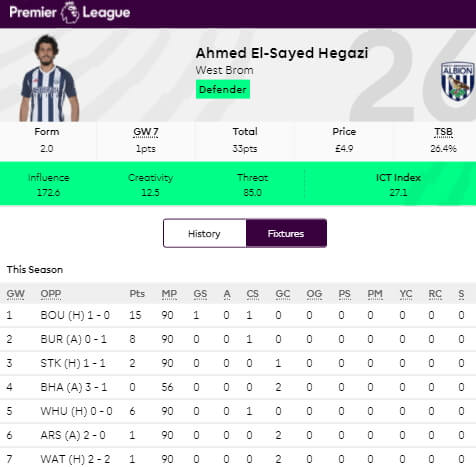 West Brom are another team who’ve started well and are currently 10th. Ahmed El-Sayed Hegazi started brilliantly with a goal and clean sheet in his first game which brought on a tidal wave of transfers in; still, good value at (£4.9) but West Brom have a difficult run of fixtures to come. The Baggies have always been considered to be very strong defensively and owning a West Brom defender or keeper would be wise. Hegazi (£4.9) and Nyom (£5.0) still hold good value while keeper Ben Foster (£4.5) is quite handy as a rotational keeper. 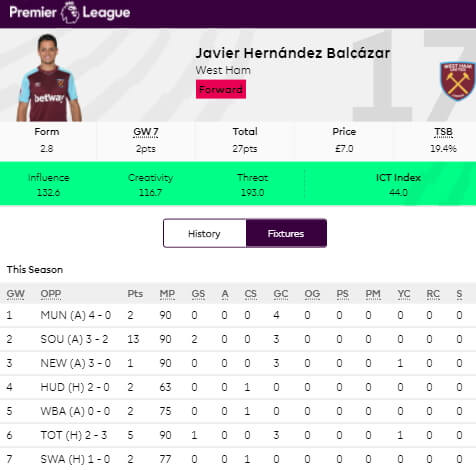 West Ham raised a few eyebrows with the signings they brought in; it looked to be a turn around in their fortunes having a season under their belt at their new home (The London Stadium) and strengthening with quality. Results didn’t follow suit as the Hammers lost their opening 3 games piling massive pressure on manager Slaven Bilic. They have since stabilised with 2 wins and a draw in their last 4 games and have climbed up to 15th. Star singing Javier Hernández (Chicarito) has been more miss than hit but has proven quality. You’d have to imagine that if the Hammers’ fortunes change he’d be the spearhead. Still quite pricey at (£7.0) but he should be one to keep an eye out for; perhaps if they string a couple of results together he could be considered.

So there you have it, a brief look into the season so far with potential #FPL assets to look out for and possibly consider. During the international break keep your ears to the ground and pray that players come back unscathed. There’s nothing worse than having to reshuffle your team because a player was playing in a pointless international.

Good luck, and listen to the latest Anfield Index #FPL podcast below!