The halt in league games for the international break means a pause in the glories to glow about and the follies to frown about with regards to Liverpool Football Club’s on-field exploits.

So while it was tempting to look up some old videos of the glory days or highlights of some awesome Liverpool goals, I have actually been preoccupied a fair bit thinking about defence. Yes, I know, somewhat of a boring subject if I may say so. (Just kidding.)

Catching some glimpses of both good and poor defending in the recent international games and reading some of the pieces on this site on the LFC defence got me wondering some more about our own defence, but especially what the trend has been for Liverpool in the Premier League. Well, just in case you were curious, below is a quick snapshot of the last dozen seasons on how Liverpool’s record for goals scored (GF), goals conceded (GA) and goal differential (GD) compares with each season’s league champion.

I realise one may slice and dice these data and contextualise them in all sorts of ways. My intention at looking at it was not to get carried away with any kind of mind-numbing coefficients and mathematical gymnastics, but merely to explore something I had not quite paid much attention to, but happen to get curious about. Quickly pulling together some of the information to see if there was anything one could extract about trends especially with regard to conceding goals seemed like a worthy exercise.

Not surprisingly, one is going to find that the champion typically scores more goals and gives up fewer than its rivals, so the point of including that comparison below is more for illustration purposes and provides comes comparative perspective.

Note that with the exception of Leicester in 2015-16 no team with a less than 2-point GF/GA ratio has won the league title in the period covered below. On the 5 occasions that Liverpool have hit the 2-point score on the GF/GA ratio, they have not finished worse than fourth and finished in second place twice (2008-09 and 2013-14) during the last 12 seasons.

Of course, it matters that a team be effective at both ends of the game for this ratio to be on the favourable side. However, given our apparent defensive frailties, I wanted to take a closer look at our trend in goals conceded over this period under consideration. I find it interesting that for the four seasons between 2005-06 and 2008-09, our goals conceded (GA) tracked closely with the team that won the title in those years, and tended to be in the mid to high 20s. But beginning with the 2009-10 season, the GA number ticked upwards into the 30s (and beyond) range. More significantly for us, we’ve since never been able to keep it contained in the 30s range. Indeed, we are arguably in our worst stretch over this 12-year period even as we improved in bringing the raw countdown in 2016-17 from the season before (from 50 to 42). 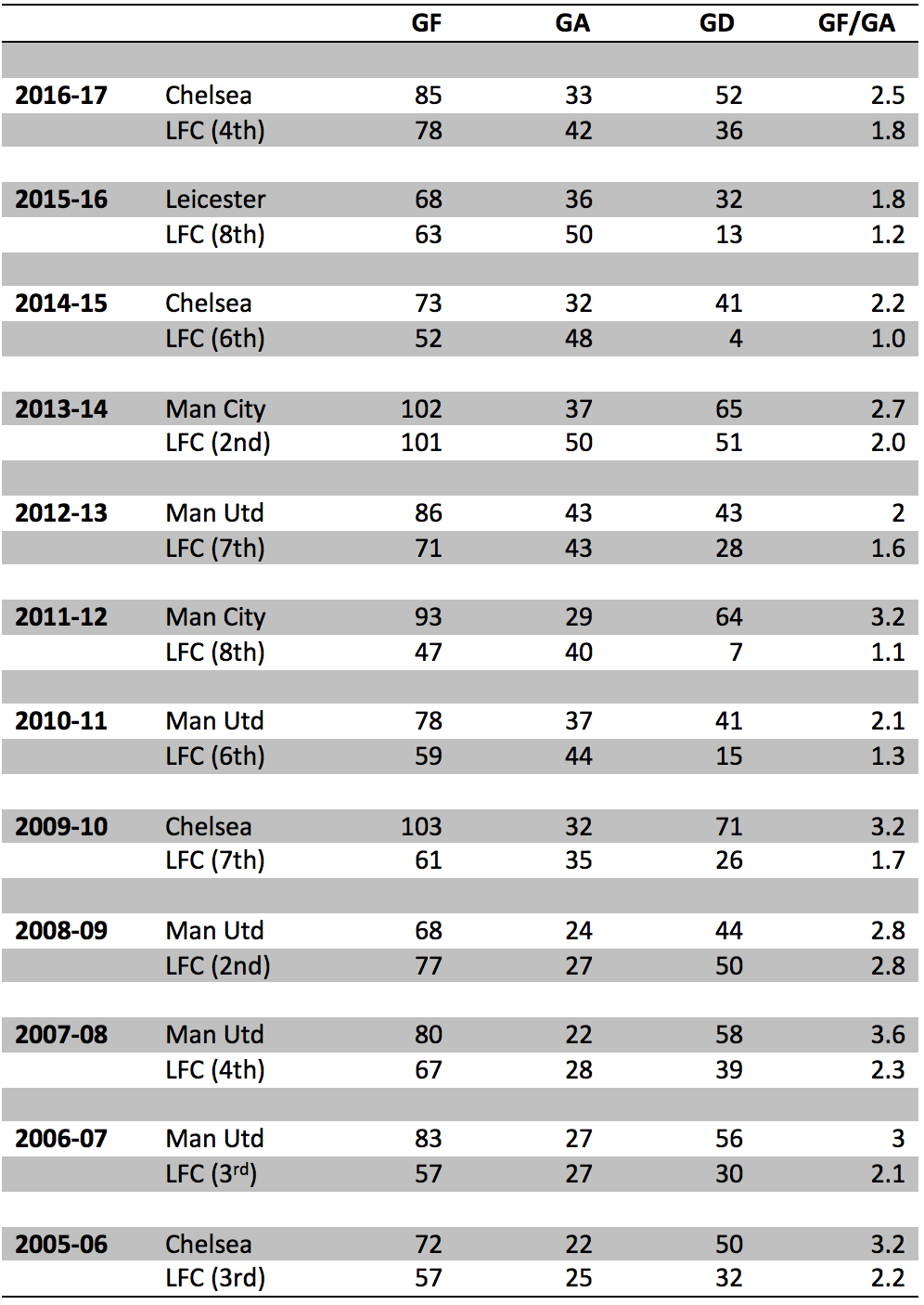 By the way, just a quick observation regarding our goal-scoring prowess: it appears that following our 2013-14 formidable year on this front, we’ve been reverting back to a more predictable pattern, and at our current pace, may come up short by a few goals of last season’s 78 goals scored. 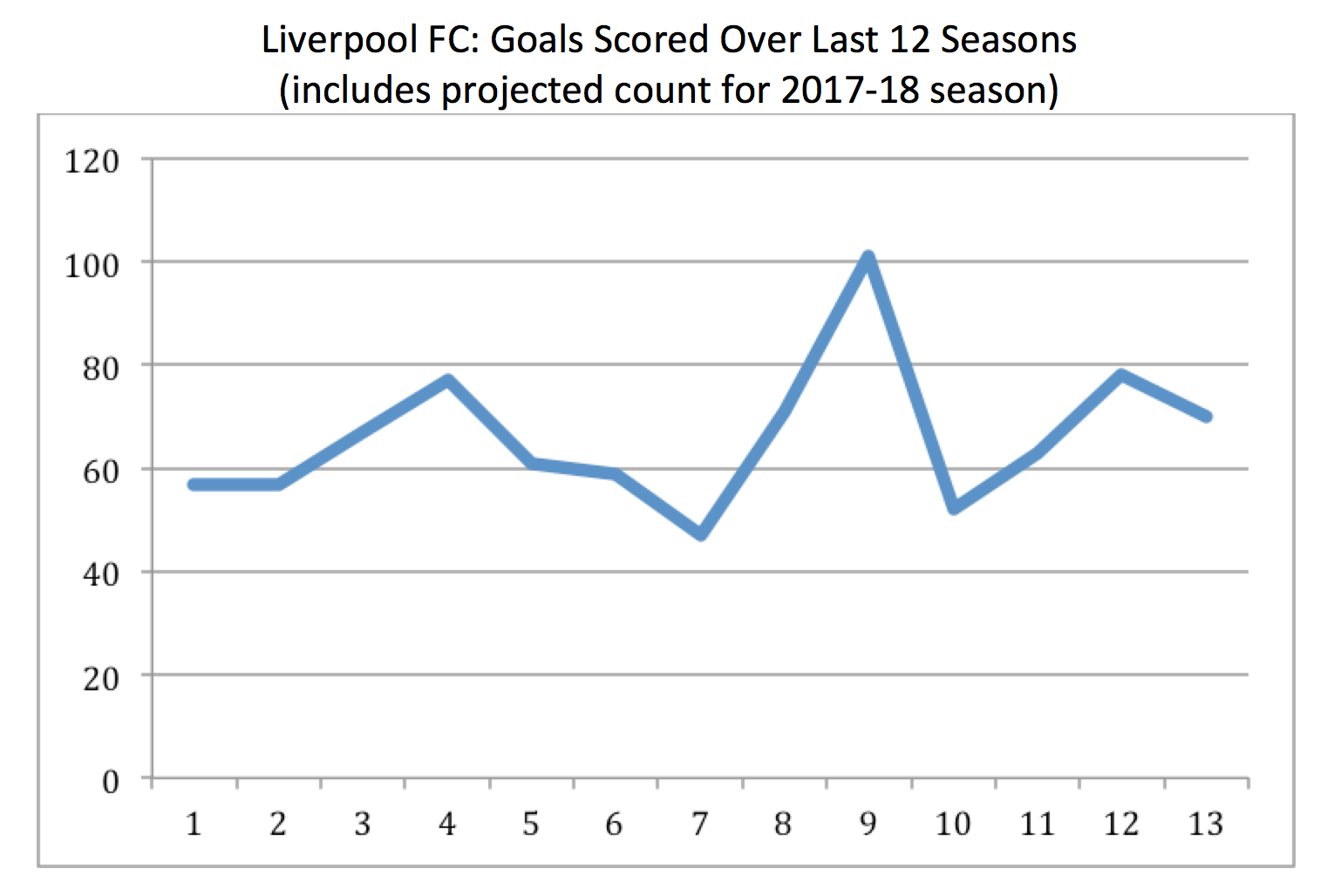 The graph above captures Liverpool’s goal trend including after projecting for this season’s anticipated goal haul (i.e., season 13 on the horizontal axis) based on current trends.

As for how the trend looks for goals conceded (and anticipated to concede this season based on current trends), you’ll see in the graph below that we have moved in one distinct direction since finishing in third place in 2005-06 when we conceded only 25 goals – our lower count over the last 12 completed seasons. 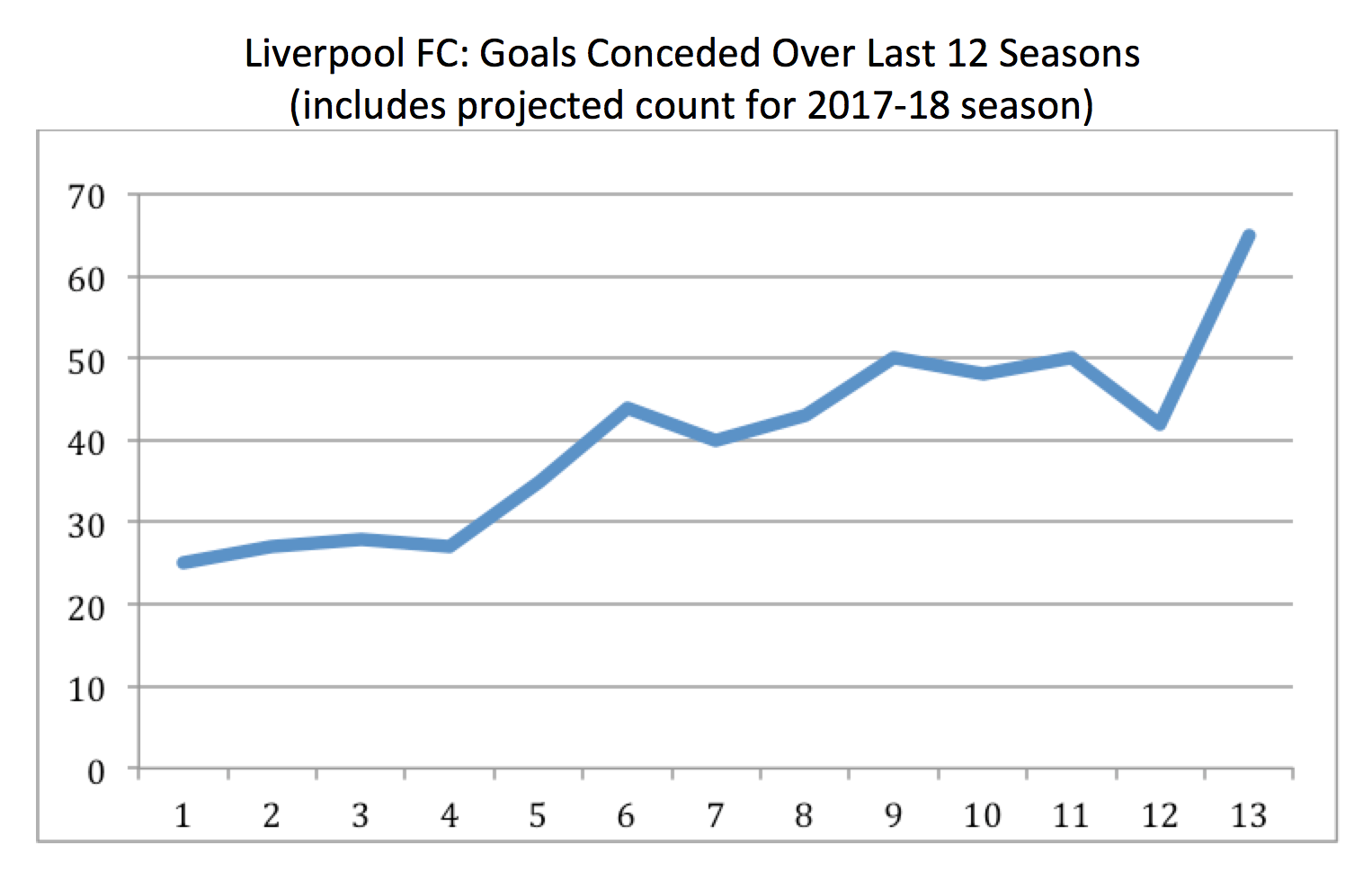 Since the inception of the Premier League, no team with a less than double-digit positive goal differential (GD) has ever won the league title. Seeing where some of our immediate rivals are situated at on the GD front at this stage of the season, to say that we’ve got our work cut out for us would be putting it mildly. At the current rate, Liverpool are poised to end the season with a goal differential of +5.

I can’t help but be reminded of the expression: offence wins games, but defence wins championships.

The above picture regarding our defence is not what comes to mind when we hear the expression ‘The Liverpool Way’, but given what has been happening with respect to our pattern with goals conceded over the last dozen years – and perhaps even the way we tend to concede – it could give new meaning to the expression: The Liverpool Way.