I was one of the doubters, I’m not going to lie. The last months of the Brendan Rodgers era were depressing. The team let the manager down, the fans down but most importantly they let the one true icon for a generation of supporters down in his last season. FSG decided to stick with the Northern Irishman while giving the boot to the backroom staff. A decision that at the time looked baffling. But maybe Jurgen wasn’t ready. Maybe there were no good options to replace Brendan, who was sacked after a start that it is at the very least comparable to what we are enduring this year. Then came the charismatic German with his heavy metal football. He somehow turned that season into something exciting – gave us cup finals and the comeback of the decade against his former club in front of the Kop. Then came the great start of last season and hearing the Champions League anthem at Anfield again. And most importantly – Klopp made me (and a lot of Reds) believe. Believe in that we are close to the promised golden sky. He saw the problems, he understood us. He still does – judging by his post-match comments. I consider myself an optimistic bloke – always trying to find the positives. I’ve been doing it all season. To be fair, circumstances haven’t really fallen in our favour since the beginning of August and bar a second-half collapse against Man City the team always put a good shift in. But this time there are no excuses. The worst part is – all 4 goals were avoidable. We weren’t beaten by the great attacking talent, that Spurs undoubtedly have. The not so mighty Reds gave them chance after chance and they just converted. Just look at the third goal – Spurs didn’t want to score, and yet the ball found its way to our net. We’ll get back to that later. I’m sure all of you have seen the goals being broken down post-match but let us just have another look.

The mistakes of youth and lack of cojones in the experienced

A lot of people will blame Lovren for the first goal. The mistake that triggered the whole situation comes from Joe Gomez. He has no offensive player around him and is the deepest lying defender. A mistake that you can attribute to lack of experience but is still very basic. Not the first time one of our young defender let his teammates down by playing a striker on side. Trent Alexander-Arnold made the exact same mistake against Hoffenheim. However, the reaction by the centre-back’s is so poor that it overshadows the bad positioning by Gomez. Lovren just jogs back, the second time he has done so in 3 games:

Lovren just gives up on the play. Yesterday in a similar matter the Croatian was not bothered to be near Kane when the English striker was taking the shot. This is not good enough for Liverpool football club and shouldn’t be good enough for Jurgen Klopp. I have defended Lovren before but there is no excuse for not trying to get back. There is no other defender in recent times that lacked the desire to make a last ditched saving tackle. Martin Skrtel made a career out of it – covering for mistakes with spectacular sliding tackles. Matip’s reaction isn’t perfect either but in both situations, he is the one of the two showing the will to do everything possible to prevent the goal (and in the first case almost succeeding). If Dejan is injured and playing on a bag of painkillers he shouldn’t be starting, if there is something going on in his personal life that might be messing with his head, he shouldn’t be playing. That’s on the manager.

The Croatian is the main man at fault for the second goal when he somehow misjudged a throw from the Lloris. Jurgen Klopp said after the game that had he been playing, that ball was not going to reach Kane. I love Klopp as manager but his playing bio is not nearly as impressive – he never managed to play in the Bundesliga. What the German basically said is that a defender from the 2nd tier of German football would have dealt with that situation. Which is a good place to conclude the analysis on Lovren for this match. I want to point out something else in the build-up to the second goal. James Milner is 31 years old and has played in over 450 Premier League games since 2002.  He is the definition of experience and yet he let Son ran past him, without even trying to stop his run. Compare the situations to this moment from last season (and yes, I’m sorry for filling you with rage): 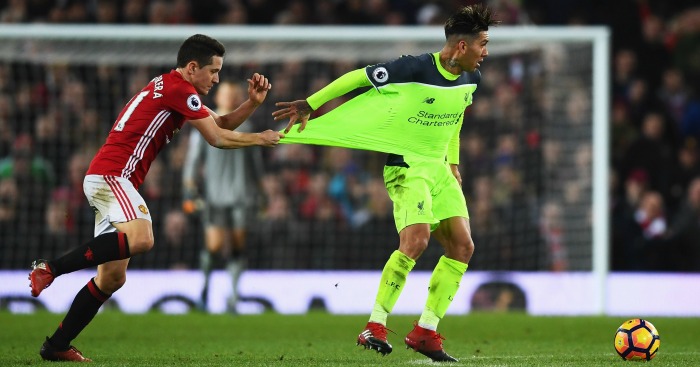 Picking up a yellow card is worth it sometimes but our midfielders are rarely willing to take one for the team. As Troy Deeney would put it – our midfield lacks cojones at times. I’m not advocating dangerous play or diving. Just the occasional cynical foul that would made the opposition fans want to throw their TV out of the window. We have a group of nice and very talented players but they don’t like to even attempt to exploit the rules. No one got a yellow card when Watford equalised in the 90th minute. When Salah was brought down against Burnley he was the only one protesting the injustice.

The last two goals came from set plays. A lot has been written about that. Time and time again. Second and third balls. I wouldn’t be surprised if those words are written with huge red letters in the Melwood locker room. If they aren’t, they should be.

Let us begin this journey to a dark place with Emre Can. The German international made 3 mistakes in the 2 added minutes of the first half – giving the ball away to Alli, fouling him and wondering around like a student visiting Amsterdam for the first time when defending the cross.  As I wrote earlier Spurs didn’t even want to score from the free kick. They did not commit any additional players to attack it – it was just Kane, Alli and Son, who were already around our box when the foul was committed. It has gotten so comical that teams don’t even bother bringing their centre-backs forward to score from a set play against us. To be fair, it should have been an offside, so that excuses Matip in a way. Can, however, is in no way affected by the wrong decision. Emre was also one of the players who lost a duel in the build-up for the first goal and was initially guarding Kane for the fourth one. If he thinks such a horrendous defensive display will be tolerated at Juventus, he is not familiar with how Italian football works. The Italian colossus managed to shut down Barcelona and a free-scoring Monaco en route to the Champions League final season.

The primary villain for thankfully the last goal we conceded is still Simon Mignolet. Another usual suspect. But that shouldn’t take away from the fact that the top scorer of the Premier League for the last 2 season’s (and leading the scoring chart this season) was left unchallenged on the edge of the six-yard box for a rebound tap-in, while there were 9 players in red shirts in the box.

You are probably thinking – what the hell are talking about. And you may have a point. But I have faith in Jurgen Klopp. This is his first real challenge since he got the job. I believe the German is up for the task. He is as stubborn as a man can be but this loud slap will lead to changes. Borussia Dortmund had a terrible start in Klopp’s last season in charge – they were sitting last in the Bundesliga table after 19 matchdays and finished 7th. Obviously, the Reds are in a much better position still somehow just 3 points behind 4th and we have already played all teams in front of us in the standings except Chelsea. And honestly, can it get worse?

The believers are turning back to doubters, Jurgen. It’s the first time in a while I saw the travelling Kop half empty before the final whistle, that’s the same supporters who were singing “You’ll never walk alone” while Manchester City were dismantling the team at the Etihad.  It’s time to show us what you are made of!