Liverpool came into this game as hot favourites after disposing of the same opposition 7-0 in Slovenia two weeks ago. They could all-but-guarantee qualification to the knockout stages with three points tonight and maintain pole position at the top of the group ahead of Sevilla. Klopp would have the opportunity to rest some regular starters and give some much-needed game time to fringe players. Oxlade-Chamberlain would get his chance from the start but surprisingly, and disappointingly, Sturridge would have to make do with a place on the bench.

Maribor had some changes, too. Marco Tavares, their Brazilian captain and striker, was on the bench tonight while they went for five at the back in the hopes of staying in the game as long as possible. 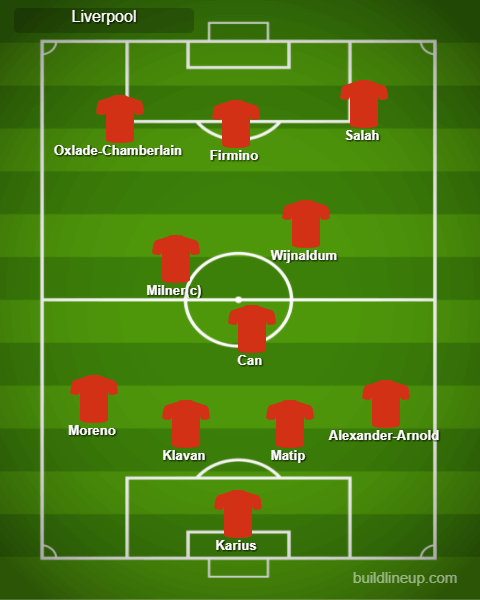 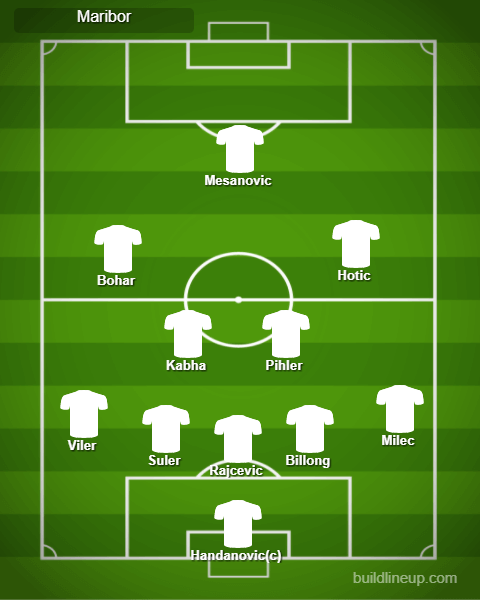 This game opened with a whimper and got quieter as the first-half progressed. Maribor had a clear gameplan to get everyone behind the ball, and who could blame them. They made it extremely difficult for the Reds to make any space between the lines of defence and midfield while Liverpool also didn’t possess a ‘Coutinho’ to come up with that killer through-ball or unstoppable long-range effort.

Billong was the extra centre-back for Maribor tonight and he started the game well, with a couple of vital interceptions in the box. One, in particular, denied Oxlade-Chamberlain of a strike at goal after a good ball back from Milner near the byline.

The most notable moment of the first half was when Gini Wijnaldum went down injured in the 16th minute. The Dutch international went off and was replaced by Henderson, who was given the captain’s armband by vice-captain, James Milner.

Liverpool’s only real chance of note was in the 33rd minute. Oxlade-Chamberlain put a cross onto the head of Emre Can who was unmarked and six yards out. Unfortunately, he was a little too far underneath the ball and couldn’t keep the header down. It went well over the bar and didn’t worry Handanovic in the least.

The second half started far brighter for Liverpool.

In the 49th minute, Salah turned home Alexander-Arnold’s cross from the right with a delightful, flick-finish. Anfield breathed a sigh of relief and the Reds were 1-0 up!

Three minutes later, it should’ve been two for Klopp’s men. Firmino displayed great skill at the byline to beat Rajcevic but the defender wouldn’t let the Brazilian get away from him and pulled him back from behind. The referee pointed to the spot. Penalty for Liverpool

Up stepped James Milner. His penalty was low and to the right but 39-year-old Handanovic did brilliantly to touch the ball onto the post and away. It remained 1-0.

Liverpool were looking more confident now. Oxlade-Chamberlain exchanged passes with Salah outside the box and put a left-footed shot over the bar.

Then Firmino had a close-range effort well saved by Handanovic.

In the 56th minute, Moreno put in a fizzing beauty of a cross, right onto the head of Salah in the centre, but his header went over the bar. He should have scored.

Maribor had a chance of their own a minute later. Bohar did well on the left to put in a low cross but Klavan was there to take it off the toe of Mesanovic.

In the 64th minute, Emre Can linked well with Oxlade-Chamberlain before then playing a one-two with Milner. Can ran onto the return ball from Milner and placed a lovely side-footed finish low into the Maribor net. 2-0!

Karius was called into action in the 69th minute. It was a fantastic strike from Milec from a very long way out. Karius did well to take the pace out of it before gathering it in.

Mo Salah came off for Daniel Sturridge in the 74th minute and Firmino was replaced by Marko Grujic ten minutes later.

Thankfully, there was time for Sturridge to add a third. In the 90th minute, Milner played a short corner to Moreno. The Spanish fullback put in a cross which the Maribor defence failed to deal with. Sturridge took the stray ball on his chest and then drilled a low finish past Handanovic. 3-0!

That was how it finished. Job done for the Reds. 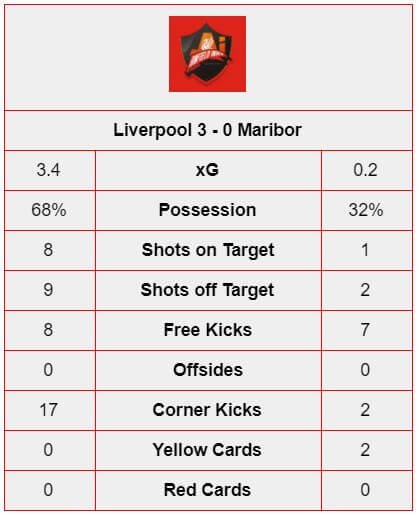