Liverpool arrived in Seville on a good run of recent form. Despite some early disappointing results in the group for Liverpool, these two teams have lived up to expectations as they battle it out for the top spot. 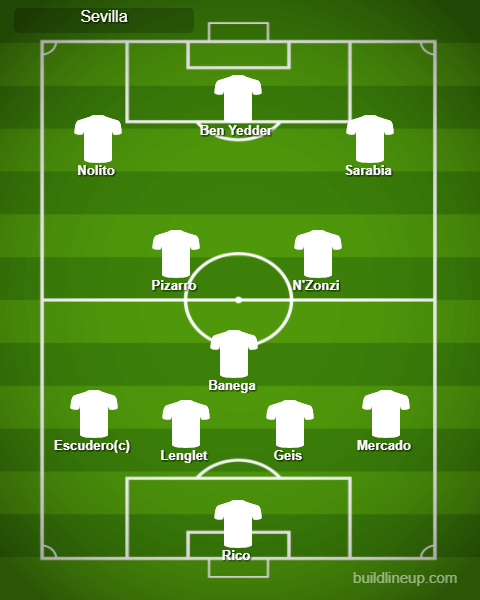 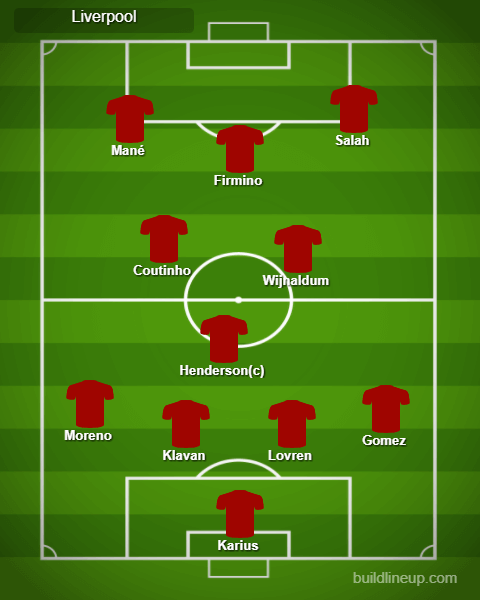 Well, it didn’t take long tonight, did it? Mané won a Liverpool corner after one minute. Coutinho swung in the cross from the right. Wijnaldum was there for the flick on the far post and Bobby Firmino arrived unmarked to finish perfectly at his near post. Rico didn’t have a chance. 0-1!

Sevilla’s first chance on goal was after 13 minutes. Sarabia found Nolito on the left. The former City winger played a lovely short ball to the overlapping Escudero. He opted for the shot at the near post but it ended up in the side-netting.

From the 19th until the 22nd minute, we witnessed chances galore and you could say the game was probably decided in that period.

Firstly, Henderson was dispossessed after a poor short ball from Wijnaldum in midfield. Ben Yedder played in Nolito who beat Joe Gomez with his dummy and turn. His shot was brilliantly touched onto the post by Karius. The rebound, luckily, came straight back into the arms of the Reds’ goalkeeper.

A minute later, Ben Yedder was put through one-on-one but he pulled his shot low and wide to Karius’ right-hand post after beating the ‘keeper’s dive.

Then, Henderson put Firmino through against Rico. The Sevilla goalkeeper managed to save the Brazilian attacker’s strike and it went wide.

It was a case of deja-vu from the resulting corner for Sevilla, however. Coutinho swung in the cross and Firmino flicked it on, this time. It was Mané whose turn it was at the back post and he pulled off a fantastic diving header finish to beat Rico, again. 0-2!

In the 30th minute, Mané was put through on the left. Sevilla couldn’t cope with his pace. He got his shot away but Rico parried it into the path of Firmino. Bobby had an open goal to nab his second of the night. 0-3!

The only singing was from the away end as the travelling Kop were now in full voice and loving it.

Salah almost made it four after 40 minutes. Coutinho put him through with a great pass but Rico was equal to Salah’s first-time attempt.

Sevilla needed an early goal in the second half. They got it. A set-piece on the right was put onto Ben Yedder’s head. The striker glanced his header perfectly into the far corner, leaving Karius helpless. 1-3.

That goal got Sevilla and the home support completely fired up. Ten minutes after Ben Yedder’s opener, Sevilla won a soft penalty. Moreno was adjudged to have connected with the Sevilla forward and the ref pointed to the spot after some advice from his assistant.

Ben Yedder had to retake the initial penalty but it was the same result as the first. Karius was beaten and now Liverpool were getting nervous. 2-3.

Two minutes later and Karius had to save a stinging effort from Vazquez on the right. In the 63rd minute, Klopp replaced Moreno and Coutinho with Milner and Can respectively.

Liverpool gradually regained a foothold in the game and began to take hold of the ball. Firmino continued to torment the Sevilla defence and he created a chance for Salah in the 71st minute. Salah’s left-footed shot was just partially-blocked by the defender and went wide of Rico’s goal.

Six minutes later, Liverpool hit Sevilla on the break. Salah did some great work on the right and played Emre Can. Can looked up and tried to play in Mané for a simple finish at the back post but the impressive Ever Banega blocked it brilliantly when it looked to be a certain fourth goal for the Reds.

Three minutes later, Can played Mané in on the left and his shot from just inside the box went narrowly over Rico’s crossbar.

Oxlade-Chamberlain came on for Salah with three minutes remaining. Liverpool looked to have weathered the storm and managed to hang on for the three points.

But it’s never that simple, is it? A 93rd-minute corner from the left for Sevilla was only partially headed clear by Klavan. It fell to Pizarro in the penalty area and he did well to stab it home past Karius. The Reds had let it slip. 3-3.

A great game in Sevilla but Liverpool will be kicking themselves that they did not do enough to see this game out. 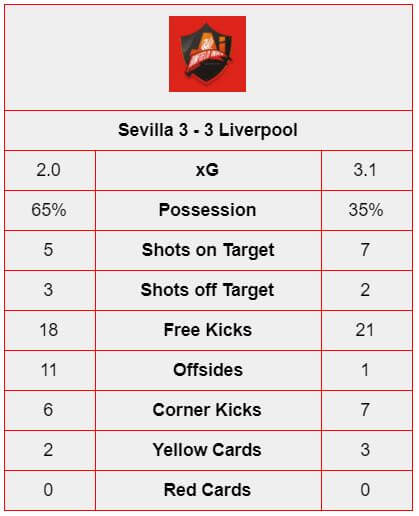