Liverpool missed a golden opportunity to jump into 3rd place in the league at the weekend. Chelsea and Arsenal both dropped points and it was only the Reds’ failure to capitalise on their derby domination that led to them dropping two points in what should have been a comfortable home win over the blue half of Merseyside.

After starting the season with three consecutive victories, beating Bournemouth and Burnley in the league and Accrington Stanley in the League Cup, the Baggies have now gone 15 games without a win in all competitions. They are 17th in the league with just 13 points. Alan Pardew has a tough task on his hands in keeping West Brom up this season.

Clyne is unavailable until February with a back injury. Matip is not expected to be fit again until January while Moreno (ankle) is also unavailable for the next few weeks at least. Lallana will be hoping for more minutes on the field so depending on how the game is shaping up I would expect to see the England international given the chance to gain some more match fitness.

I think Andy Robertson will be given his second successive start in this game in place of the injured Moreno. Liverpool need to take all three points here after the derby disappointment. That’s why I’ve gone for the full-strength attack of Salah, Firmino and Mané.

James Morrison, Craig Dawson and Nacer Chadli are all definitely out for this game. Gareth Barry is carrying a slight knock but I expect him to make the starting eleven. Matt Phillips and Chris Brunt are also doubtful and may well miss out.

New Baggies boss, Alan Pardew, is expected to set his team up in a 4-3-3 shape. 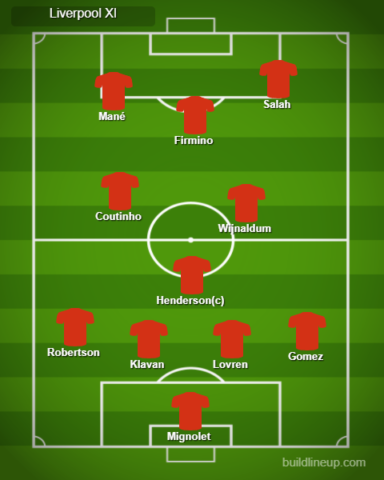 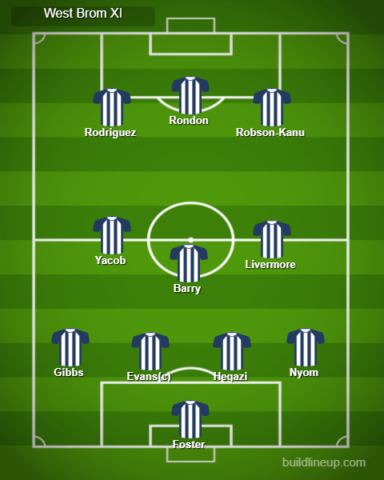 Their last meeting was at The Hawthorns in April when a Bobby Firmino goal was the only difference. Last season’s Anfield meeting was a 2-1 victory for Liverpool. Mané and Coutinho had put Liverpool two up before the break. Gareth McAuley pulled a late goal back for West Brom but Liverpool saw the game out for the win.

West Brom’s last win in this fixture was in 2013 when they won 2-0 at Anfield, completing a league double over the Reds in Brendan Rodgers’ first season in charge.

Liverpool will be looking to get back to winning ways and thankfully, West Brom are no longer managed by Tony “Jose” Pulis. His low block setup would have been exactly what the Reds didn’t need to face after the confidence-damaging late penalty equaliser from the Toffees on Sunday. Pardew’s men may have a little bit more ambition at Anfield on Wednesday night and as we know, that will suit Klopp’s men down to the ground.