Liverpool got back to winning ways against Swansea on Boxing Day. A comfortable first-half performance was improved upon after the break when the Reds extended their one-goal lead to run out 5-0 victors in the end.

Looking at the xG stats below, we can see that the Reds should have won all of their three recent drawn games, as well. Arsenal should have been dead and buried before they were allowed to mount their comeback while West Brom and Everton just about managed to deny the Reds all three points at Anfield through a mixture of luck and bodies behind the ball. But that’s to be expected these days, especially when opponents come to Anfield. It’s up to our defence to have the concentration levels to do the basics when called upon and our attack needs to create when facing teams who deploy a low block.

Leicester are in a poor run of form at the moment. Though, to be fair, two of their last three games were against the top two in the league. They lost 2-1 to Manchester City in the Carabao Cup while they achieved a creditable 2-2 home draw against United in the league when Harry Maguire equalised with the last kick of the game. Watford beat them 2-1 on Boxing Day after a Kasper Schmeichel error. Before the City game, Leicester had probably their worst result of the season, losing 3-0 at home to Crystal Palace. Strange, when you consider this came immediately after a hugely impressive 4-1 victory for the Foxes at Southampton three days previously.

Clyne is unavailable until February with a back injury. Jordan Henderson misses out with a thigh injury he picked up in the early stages of the game at Arsenal last Friday. Moreno (ankle) is still out and will be for another couple of weeks, at least. Daniel Sturridge is lacking match fitness after missing out on the last couple of games because of a tight hamstring while Grujic has a wrist injury that could keep him from a place on the bench. Milner and Solanke may be awarded starting places to rest Coutinho and Firmino.

Leicester are still without Robert Huth and Matty James while Danny Simpson is also a doubt for this game. Dragovic is the likely candidate to replace Simpson at right-back. Riyad Mahrez will slot into the attacking-midfield role behind Vardy who will be the lone fox-in-the-box. Vardy has scored six goals in his seven games against Liverpool, more than he’s scored against any other team in his career. He managed one of those goals at Anfield (in three appearances there) and that was in the 4-1 defeat last season.

Leicester have no suspensions for this game. 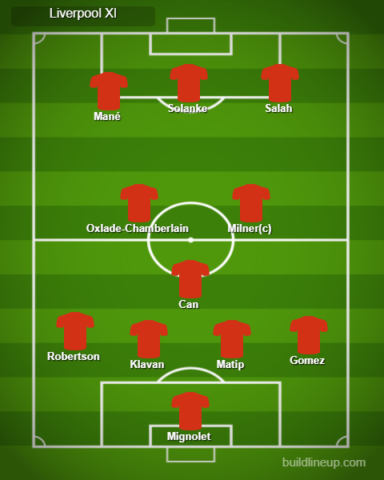 Liverpool won 3-2 at the King Power Stadium in September with goals from Salah, Coutinho and Henderson. That was just four days after they were dumped out of the Carabao Cup at the same venue, going down 2-0 to the Foxes.

Their last encounter at Anfield was the 4-1 hammering the Reds dished out in the first game in front of the newly-expanded Main Stand back in September of last year.

This won’t be an easy game by any stretch of the imagination. However, with Liverpool’s free-scoring form and Leicester’s recent defensive frailties, it’s hard to predict any other outcome than a Liverpool win. The Reds are normally a good bet for a clean sheet in their home games (they have the best home defensive record in the PL, 3 conceded in 10 games) but I think Vardy will grab his usual goal against Liverpool on Saturday. At the other end, Liverpool should have enough to make it a tough afternoon for Morgan, Maguire, Schmeichel and friends.