It’s widely known that Riyad Mahrez wants to leave Leicester City, with the Algerian keen to test himself at a top Premier League club and make the next step in his career. There’s a wide berth of interest too, with all of the top-six linked to the winger at one time or the other.

With Philippe Coutinho jetting off to Barcelona, Liverpool could be in the market for a replacement this month. Thomas Lemar seems top of Klopp’s list according to reports, but Mahrez represents another fruitful avenue for The Reds as they look to ensure the momentum of their season doesn’t follow Coutinho out the door.

Mahrez would be an interesting proposition for Liverpool, having shone as one of the most exciting players in the Premier League during Leicester’s title win in 2015/16. Scoring 17 goals and registering 10 assists, his pace, unpredictability and athleticism made him a nightmare for opposition defenders as he scooped the PFA Player of the Year award and African Footballer of the Year.

Despite a dip in form last year, he has shown his class this season, scoring seven and assisting seven. Since August 2015, the 25-year-old has scored 30 goals – two more than Coutinho and four superior to Eden Hazard. It’s a similar story with assists too. Registering three more than Coutinho (18) and eleven more than Hazard (10), Mahrez has a good end product in the final third and would fit well into an already compelling front line.

The 25-year-old’s versatility would give Jurgen Klopp a number of options to explore going forward. Operating in the Coutinho role, Mahrez could provide some pace behind Roberto Firmino while producing the kind of long-range curlers we were so accustomed to seeing from the little magician. 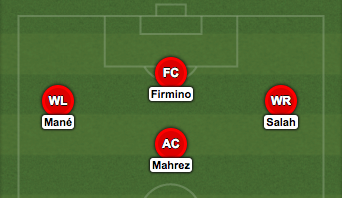 Liverpool would be blessed with one of the most fluid attacks in the league, with an interchanging of positions enabling Mahrez to venture out wide with Salah and Mane cutting inside to play off of Firmino.

Alternatively, Firmino could drop slightly deeper with Salah adopting the role as a striker. Taking up a more central position would allow the Egyptian more opportunities on goal to improve upon an already staggering goalscoring record this season. Firmino certainly has the work-rate and creativity to thrive in a deeper role as a playmaker, having created seven big chances in the league this season alongside four assists. 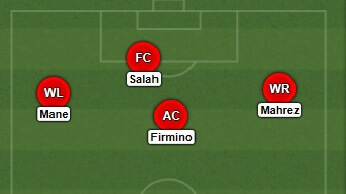 Slotting straight into his most natural position, Mahrez wouldn’t require the usual bedding in period having already proven himself in the Premier League. With the same pace and verve as Mane, Salah and Firmino, Mahrez could reignite the ‘Fab Four’ in Coutinho’s absence.

Should Liverpool look to tie up the Algerian this month, they’d get a player eligible for the Champions League – a competition he performed impressively in for The Foxes, having been involved in six goals in nine games.

Mahrez isn’t a like for like replacement for Coutinho, that much is obvious. Yet, the 25-year-old has clear talent that Klopp would be able to harness and progress over time. He’s got that touch of magic that would serve him well in Liverpool’s formidable attack.