It’s silly season again. Time to double click on that football manager icon and see who the next football wunderkind is. Time to test your f5 button’s durability. And most importantly time to complain about FSG and their transfer policy. I was thinking about writing on the hot topic but I as I have said before – I just hate narratives. So let’s have a look at something positive that has been going on for a few months now – set pieces are somehow helping us win. Our last two games were won thanks to two brilliant crosses from Ox and great finishes by defenders. And even more surprising the Reds did not concede a goal from a dead ball in the festive period. I’m afraid to write the words – have we actually improved our set play defence? Is that even possible?

The latest good stretch has put LFC  not far from the best teams in the league: 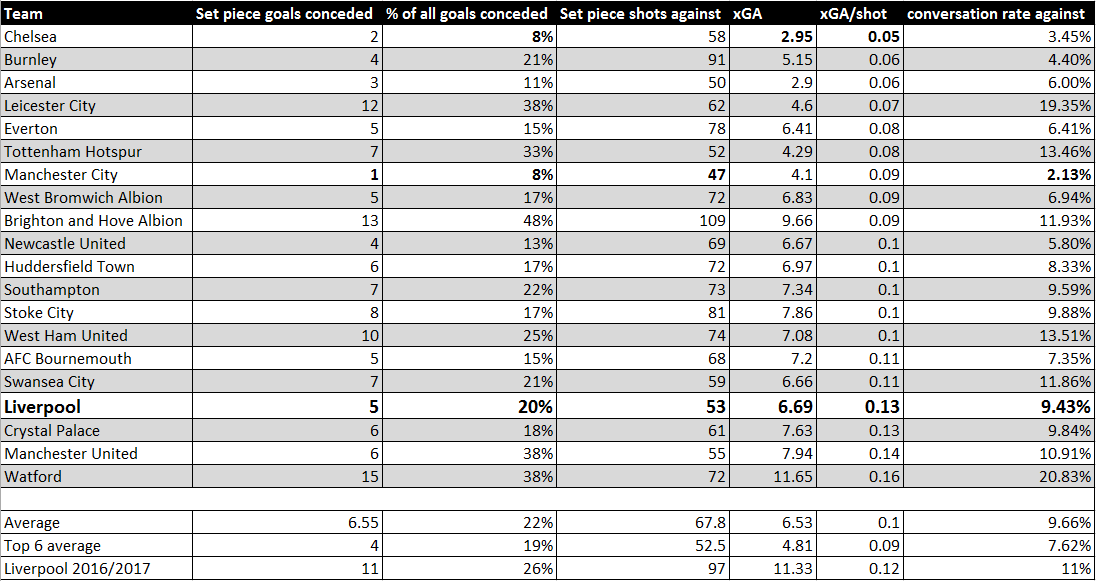 Even though only the other team from Manchester and Watford allow better opportunities for their opponents from set pieces, the Reds have conceded the 6th fewest goals. The numbers, as is often the case, don’t tell the whole story. LFC has conceded set-piece goals in just 3 games – 2 at Watford at the start of the season, 1 at Leicester and 2 at Spurs. Yes, you read that right – we have not conceded a goal from a dead ball in the league for two and half months. What the goal distribution highlights is something anyone who has watched LFC over the last 5 years knows – conceding a goal from a set play really affects the confidence of the whole team, which leads to lack of organization and individual errors. The best word to describe is panic. Step in Virgil van Dijk. The addition of the Dutchman can solve that issue. He has size, the athleticism of an NBA player and should bring leadership to a defensive line that has been crying for one since Jamie Carragher retired.

Comparing to how the Reds did last season there is an improvement all over the board, except for a slight increase in xGA/shot. The most important number is goals conceded and the Reds are on pace for a 2 or 3 goal improvement. With van Dijk leading the way until the end of the campaign, hopefully, the improvement will be even bigger.

Some notes on the rest of the league:

It is hard to quantify how indirect free kicks and throw-ins are defended. Goals from direct free kicks are usually a result of a brilliant shot or a goalkeeper error, not much defending there.  The Reds are one of 12 teams to not concede a goal from a direct free kick this season. That leaves us with corners to try and look into set play defence in a bit more detail.

It’s a familiar story. No team has allowed better shots after corners. We are way below average in terms of corners per goal and the conversation rate against us is among the highest in the league. However, Reds have not conceded a goal from a corner since the first match against Leicester in September. Chelsea, Manchester City and Burnley are head and shoulders over the rest of League. Last season’s champions have conceded just one goal from 98 corners taken against them – that’s special. LFC average when it comes to the ratio of allowed shots.  Only Manchester City have allowed fewer shots from corners. The bad start of the season inflates Liverpool’s numbers – in the Watford game alone xGA from corners was 1.36, over 30% of the total xGA from corners. As the time passes and the weight of the bad start gets smaller I expect LFC to move up the table and be at least average in terms of corners per goal conceded.

The improvement under Jurgen Klopp

Defending set pieces was already a huge issue for the Reds when the German took over from Brendan Rodgers. And while the struggles in Klopp’s first season can be attributed to the failures of his predecessor, there are no excuses for last season. There has been a huge improvement in the set-piece goals conceded per game over the last 2 years:

Since Klopp arrived at Anfield we have conceded 0.31 set piece goals per game on average. But there has been an improvement every season. The start of this season was terrible. For the first three months, the Reds conceded 0.5 set piece goals per game. The shambolic display was followed by the best streak in recent history – 12 straight league games without conceding from a dead ball. The current average of 0.23 is 42,5% better than 2015/2016. Obviously, the team Klopp inherited was incredibly bad at this part of the game. The hamstring injury crisis in the Germans first winter in England didn’t help as is visible by the spikes in December and January. We still need to give credit to Jurgen for turning a bad situation into at least an average one. But being average is not good enough. Since the Spurs game we have been the second-best team in the league, any other year such a run would make you the best team in that time span. Not conceding from set pieces is a big reason for our current streak.

Is it time to be optimistic?

When gathering the numbers there were some strange thoughts in my mind. Have we actually become good at defending set pieces? The last couple of months suggest so. Is it just a small sample size? Maybe.  I consider myself a believer. Klopp has me convinced that he is building something that can one day be special. But I (and every Liverpool supporter) have watched the team panic when the ball is crossed so many times it will take more than a few good months for my heart to stop skipping a beat every time the ref points to one of the corner flags. I quadruple checked the numbers for the last two months because I didn’t look believable. Van Dijk should, in theory, improve every aspect of our defence. Since Klopp took over the average height of the squad has increased every season, which might be one of the reasons for the improvement, the Dutchman adds to that. I’m certainly cautiously optimistic and I can’t remember the last time I could say that.

Set piece goals don’t include penalties. All stats courtesy of understat and the official PL website