Since Carlos Carvalhal’s arrival, Swansea have slowly gone about making themselves more difficult to beat. A more congested midfield line is how Carvalhal has tried to shore things up at the back. They played a 532 in the 2-0 home defeat to Spurs, so it is hard to know what shape Carvalhal will decide on for Monday night’s game.

Liverpool are flying. The Reds are the form team in England at the moment. Coutinho has gone but Virgil van Dijk has arrived, scoring the late winner in a cup derby game at the Kop end to announce himself. Also, the remaining attacking contingent at Anfield took it upon themselves to show that Liverpool are still a force to be reckoned with in the win over City, last Sunday. Oxlade-Chamberlain was fantastic in that game, as was Bobby Firmino. Andy Robertson has been getting better and better, keeping an in-form Raheem Sterling quiet in the last game, too.

Wilfried Bony is pushing for a starting place after playing and scoring the winner against Wolves in the FA Cup replay on Wednesday night. Tammy Abraham is still carrying a slight knock too, so it’s unclear if he will be available for selection. Kyle Naughton is back after suspension and should take the right-back spot in place of the injured Angel Rangel. Renato Sanches and Mike van der Hoorn are due to face late fitness tests to see if they can be selected.

Swansea have lined up in a 442 shape in recent games with Carvalhal looking to steady things at the back first and then work from there.

Swansea have no suspensions for this game.

Loris Karius has been confirmed as Klopp’s current “number one” pick. Virgil van Dijk, Daniel Sturridge, and Alberto Moreno are due to face fitness tests before the game on Monday so Klopp can then decide on his matchday squad. Indeed, rumours are gaining traction about Sturridge possibly moving to Sevilla or Internazionale on a loan deal but as of now, he’s still a Red.

Henderson and Clyne are unavailable for Monday night. 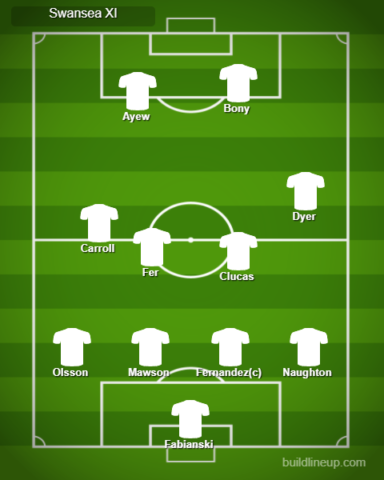 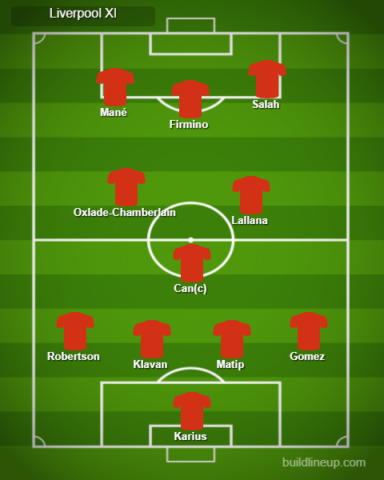 Liverpool beat Swansea 5-0 at Anfield on Boxing Day. That was the start of the five-game winning streak the Reds are currently on in the league. Last season, Swansea won 3-2 at Anfield but Liverpool won the earlier game at the Liberty Stadium, 2-1. Leroy Fer gave Swansea an early lead that day but Firmino equalised after half-time and James Milner won all three points for the Reds with a late penalty.

Carlos Carvalhal has his work cut out for him at Swansea as they remain rooted to the bottom of the table. Liverpool have been excellent as of late and this season they have been extremely impressive away to the lower teams. I can’t see any other result occurring other than a Liverpool victory.