Huddersfield have been struggling of late. While 14th position may be an admirable and acceptable place to find themselves in at this stage of the season, the reality is that Wagner’s team are just two points above the drop zone. They have lost three of their last five in all competitions; the other two games were a 2-1 win at Bolton and Saturday’s 1-1 draw at home to Birmingham, both games in the FA Cup.

Liverpool were flying high until last Monday night in Wales. Swansea and Carlos Carvalhal were able to stop the runaway Red train. Fast forward to Saturday night, this time it was West Brom who upset Klopp’s men, knocking Liverpool out of this season’s FA Cup.

Before that, it was fairytale stuff from Liverpool; beating Everton with a late van Dijk header in the Cup, then overcoming City in an enthralling 4-3 encounter. Such a difference a couple of weeks can make. But these things happen. Liverpool have got to continue looking forward. The best way to shake off the last couple of results is by picking up three points again on Tuesday and making sure they are back on form before meeting Porto in the Champions League in mid-February.

Wagner’s injury-list contains the names of Williams, Cranie, Kachunga and Stankovic. None of those players will be available for selection on Tuesday night. Huddersfield will most likely line out in their usual 4-2-3-1 shape with Depoitre as the lone man up front.

Huddersfield have no suspensions for this game.

Liverpool are still without Nathaniel Clyne while Lallana, Sturridge and Klavan are all carrying slight knocks and may not be fit in time for Tuesday. Karius will likely return in goals for the Reds with Matip and van Dijk continuing their fledgeling partnership at the heart of Liverpool’s defence. Henderson returned against West Brom with a second-half substitute appearance and should start at the base of midfield for this game. Klopp may opt for the early-season midfield trio of Henderson, Emre Can, and Wijnaldum. Andy Robertson will most likely return at left-back to replace Moreno who struggled at times against the Baggies on Saturday. 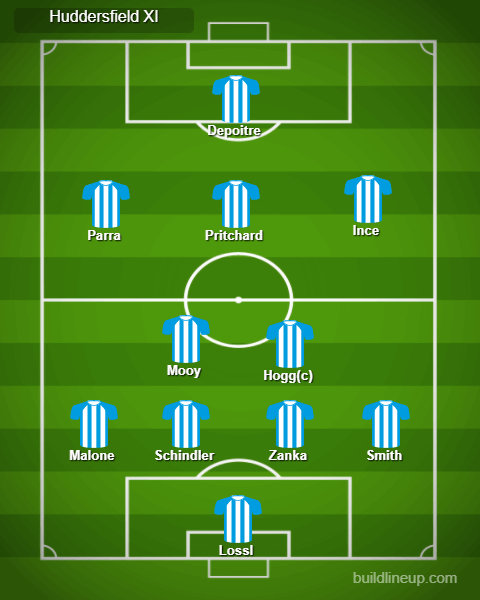 Liverpool won 2-0 the last time the two sides met in Huddersfield. It was an FA Cup game back in 1999. Titi Camara and Dominic Matteo were the scorers that day. The sides met at Anfield earlier this season and the Reds won 3-0 on that occasion. Salah had missed a first-half penalty but goals from Sturridge, Firmino and Wijnaldum sealed it for Liverpool after the break.

On the one hand, Liverpool are far superior to Huddersfield. However, football is such a confidence game and the Reds are going through their first bad really patch since September. They will certainly be out to turn things around as quickly as possible but Tuesday night is not going to be an easy game. A draw may well be on the cards.