What a game! There is nothing like a European night at Anfield. I was several thousand kilometres away and couldn’t fall asleep all night, like a little kid, just buzzing. The attack and midfield will rightfully claim most of the glory but the defending in the second half was probably the Red’s best display in that regard in years. Holding the offensive juggernaut that is Manchester City to ZERO shots on target is as impressive as anything LFC have done this season. It’s a strange and new feeling – I was waiting for us to concede but it never happened. Our defence has actually been very good since the 4-1 defeat to Spurs in October – 19 conceded in 23 games. Only Man City and Burnley have a better defensive record with 17 and 18 conceded goals in 22 matches. since then Liverpool’s defenders are still prone to moments of very bad judgement – see the matches against Arsenal and Manchester United. However, a trend that is going on for almost two-thirds of the season can’t simply be ignored as a fluke.

The article was originally supposed to be an argument to who should be Virgil van Dijk’s partner in the centre of the defence until the end of the season. Unfortunately with Joel Matip being ruled out for the run in the answer now is clear – Dejan Lovren. For a lot of supporters that is a disaster. I like to stay positive and find counter-arguments. The Croatian made some mistakes that can only be described as stupid early in the season but he has been solid since being subbed out after half an hour at Wembley in October. The eye test (at least for me) says Lovren isn’t as bad as made out to be, so what do the numbers say?

This part of the article might seem boring to some folks but here goes. I went through all the lineups Jurgen Klopp used this season (and there have been a lot) and isolated the different combinations of players. I look at the goals scored and goals conceded by LFC and also the xG and xGA numbers when a certain lineup is on the field. It’s similar to the +/- stat in the NBA. That way I can determine how many goals the team has scored/conceded when a certain player or combination of players was on the field. The gap in the methodology is a when a player is sent off. Sadio Mane, for example, was only part of a lineup that was down 1-0 against Man City, so he doesn’t get any negative points for the other 4 goals conceded while the rest of the starters in that game do. All the rating numbers in the article are per 100 minutes. I decided it’s a better number than 90 because with added time most matches are closer to 100 minutes than 90. Stoppage time is part of the total minutes because if Klopp makes an 89th-minute substitution and the team plays 5 minutes of added time, the final line up plays a total of 6 minutes together.

In yet another season the Reds don’t really have a settled back four – even back five if you include the goalkeeper. This naturally leads to LFC’s defence leaking goals. Familiarity, continuity and teamwork are an integral part of defending and in a lot of cases as important as the skill of the players. Taking Lovren as an example. This is his fourth season at the club. He has played major minutes with the following partners – Martin Skrtel in (2014/2015), Mamadou Sakho (2015/2016), Joel Matip and Ragnar Klavan over the last couple of season and will play with Virgil van Dijk until the end of the season. That’s 5 different partners in four seasons. He has also played with three different left backs. The last manager to have a settled back four was Rafa Benitez. The last manager to organize a solid defence was… Rafa Benitez. With constant changes in the backline, it’s logical in a way that the Reds are on pace to concede over 40 goals for the 8th season straight season.

Surprisingly the Reds concede the most goals per 100 minutes with Joel Matip on the field. The main reason for that Matip played in most of the matches, in which LFC conceded 3 or more goals. Lineups that include Dejan Lovren are on par with the team average. The sample size for Klavan and van Dijk is very small, so as explained in the paragraph above I add the quality of the opponent. 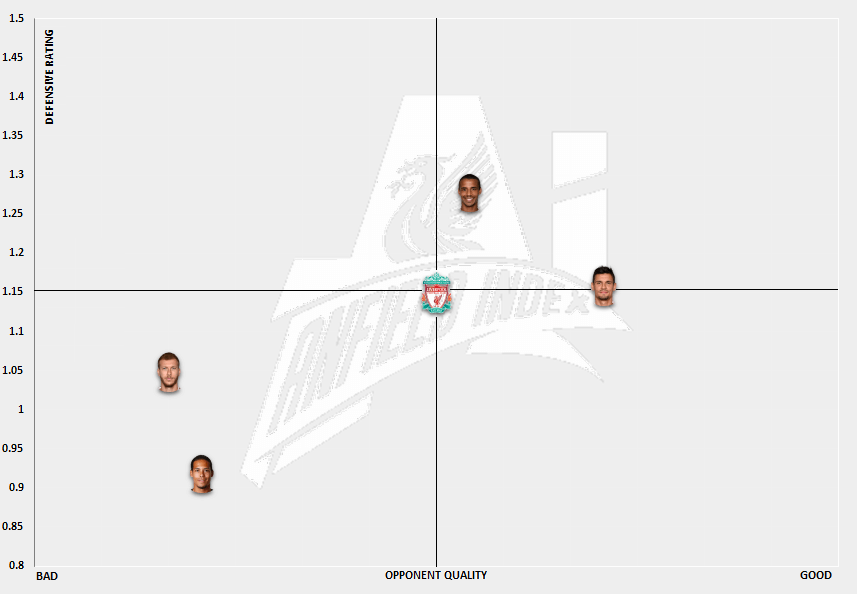 Van Dijk and Klavan have played on average easier opponents that Lovren and Matip. The Croatian has faced the toughest opposition and still has a better defensive rating than his Cameroonian teammate. Playing easier opposition on paper shouldn’t really be held against van Dijk. After all, he has been at Anfield for only 3 months. He has been an incredible addition. 7 goals conceded in the 8 games he has played – two from penalties, one from a corner, one wonder strike. Goals you can live with. What is even more impressive is that the Dutch captain is our only defender who has higher xGA than goals conceded, which means that the chances created against the Reds are of lower quality. This will probably be best reflected in Karius’ save percentage at the end of the season.

First off an additional clarification. As you can see in the table the two Virgil van Dijk CB pairs have conceded a total of 9 goals, while lineups with the Dutchman have conceded 7. The reason for that is that Tottenham scored two goals against a back three of van Dijk, Lovren and Matip. So, in that case, all the combinations between them are “credited” with the two goals – VvD and Lovren, VvD and Matip, Lovren and Matip. The things that jump out right away is that no centre back pair has played in even a third of the total minutes. Strangely, Klavan and Lovren allow the fewest goals per 100 minutes. After adding the opponent quality the picture looks like this: 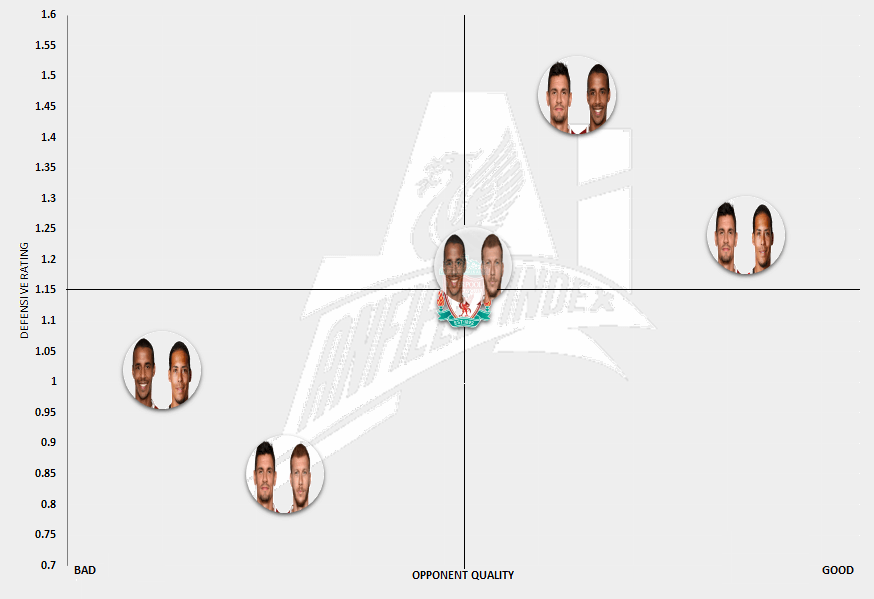 Lovren and Matip are by far the worst partnership. Van Dijk and the Croatian have faced tougher opposition in their limited minutes together and done better, even if the team didn’t win many points (draw Spurs, won against Newcastle, lost to Manchester United).  Dejan needs a leader next to him and the Dutch captain might just be the right partner for him. They did brilliantly on Wednesday and the partnership will only get better in the coming months as long the both of them stay healthy.

Losing Matip is an undoubtedly huge blow for the team. Klopp doesn’t have much depth in the centre of defence. A back three of Gini, Lovren and Emre Can worked for a game against Brighton and I wouldn’t be surprised if we see some unconventional defensive formations in the league if the Reds manage to secure a top-four finish early and not collapse against Man City next week. Lovren and van Dijk should start every important game and my opinion is that they will do well. This is the Croatian’s chance to claim the starting spot for next season. Karius already seems to be planting doubts about the need to buy a new goalkeeper. Take note, Dejan!