Stewart Downing came to Liverpool with many fans feeling that we had settled for second best after United had signed Ashley Young. Some even intimated that, in replacing Downing with N’Zogbia, Villa had improved their first team for a fraction of the price. Dalglish has always insisted that Downing was his first choice, and a look at his first six games for Liverpool helps to show why this was the case.

Downing made his debut against Sunderland on the opening game of the season. He played the first half on the left. A look at his heat map from the first half shows that he was regularly getting down the wing to the touchline, where he is at his most dangerous: 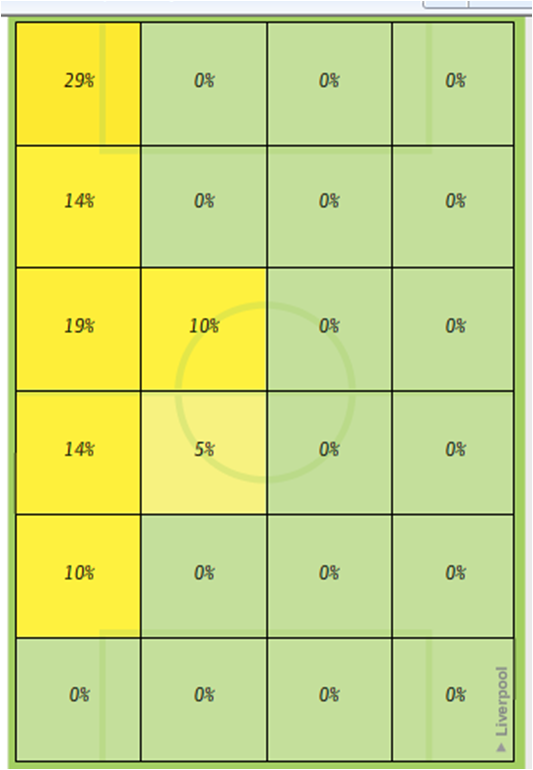 He played many penetrating balls into the danger area in the first half and linked up well with Enrique down the left hand side.

A turning point for his performance was when he switched to the right for one move in the first half, cutting inside in the 33rd minute and sending a thundering drive onto the crossbar. Had this move led to the debut goal his effort deserved, Liverpool would have gone in at half time 2-0 up, well on the way to a comfortable win.

This one successful move led to an experiment, with Downing playing on the right for the rest of the game. From this side of the pitch, he was much less effective, getting less of the ball and failing to make as many penetrating runs to the touchline. His second half heat map shows this clearly: 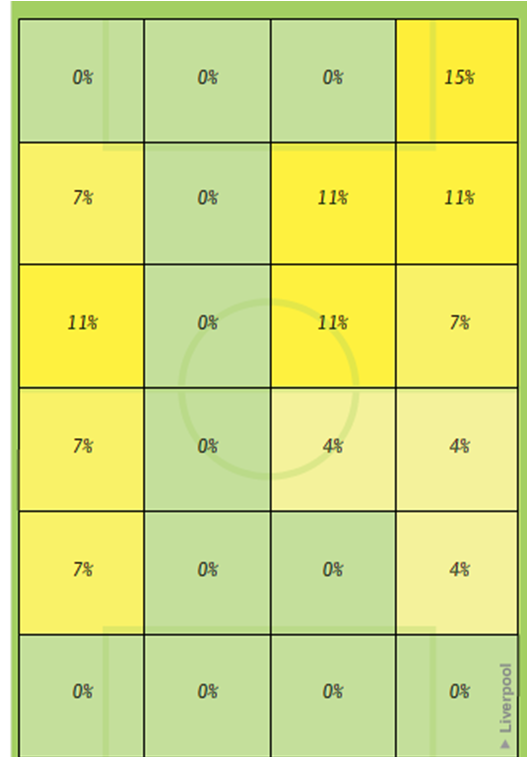 Against Arsenal, this experiment of switching Downing to the right continued. It was an extremely positive performance by him, with 55% of his possession taking place in Arsenal’s final third. His heat map shows that he spent almost as much time on the right hand side as he did on the left. 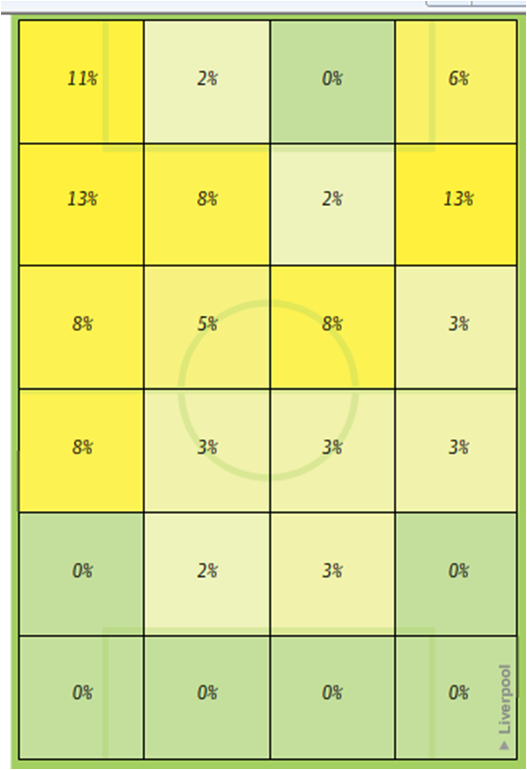 Henderson was again much more effective down the left hand side, and his partnership with fellow new boy Jose Enrique continued to flourish. Arsenal’s young full back, Jenkinson, was left chasing shadows as the two passed the ball around him down the left flank: 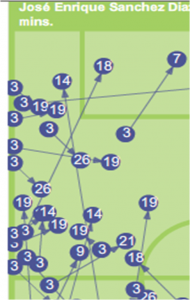 The partnership between Downing and Enrique has been one of the highlights of the season so far. Both players are naturally left footed, very attack minded and they both possess the ability to pass and move quickly and accurately. Much of our good work so far this season has come from their link up play.

The importance of playing Downing on the left hand side is evident when looking at the heat map for the away defeat against Stoke. For the first time, he actually played more of the match on the right than he did on the left: 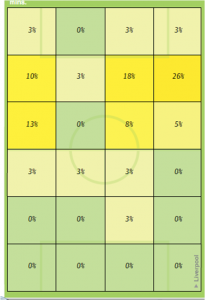 His partnership with Martin Skrtel did not bear fruit. Skrtel does not have Enrique’s ability to drive into the final third on the overlap, and Downing does not have the ability with his right foot to get penetrating crosses into the box. This led to a situation where the interplay between Skrtel and Downing was completely ineffective. It personified the performance: Liverpool dominated possession but could not find a way through the Stoke defence.

The Tottenham game again exposed Downing’s ineffectiveness on the right, although he is in no way to blame for the 4-0 defeat.

Based on the heat map in his sixth game against Wolves, the experiment of “Downing on the Right” is over: 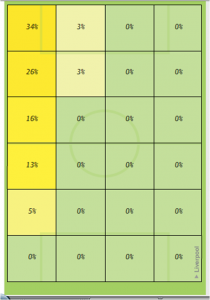 For the first time this season, Downing did not get a touch of the ball on the right hand side of the pitch. He spent an astonishing 60% of his time in the left hand corner of Wolves’ half, where he is at his most dangerous. At times, he and Enrique were playing keep ball down the left so effectively that even their Liverpool team mates must have felt left out. The following chalkboard shows just how well this partnership is developing: 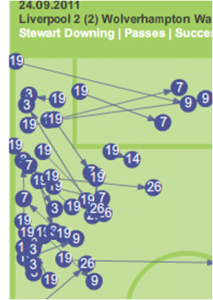 Looking at the above chalkboard in more detail, it is also clear that Suarez and Carroll are benefiting from Downing’s dominance down the left, with each of them collecting the ball from him on the edge of the six yard box twice. Given the finishing ability of both strikers, if Downing is able to provide an average of four balls into this area each game we are in for some very high score lines.

Overall, Downing’s start to the season has been very consistent. The highlight has been the partnership with Enrique whilst the low light has been the largely unsuccessful experiment down the right. He has been a great asset to the team and is an early contender to be runner-up to Suarez for player of the season.