A local lad from West Derby, Trent Alexander-Arnold embodies the very spirit and culture of the city of Liverpool. Growing up within walking distance of Melwood, he would watch Steven Gerrard, Xabi Alonso and Jamie Carragher through cracks in the wall. He knows the city, its people and its values: he just gets it.

Since Gerrard and Carragher retired there’s been seldom home-grown lads making the grade at Anfield. Two players not just loved for their undoubted ability, every time either one of them scored it represented a goal for everyone who grew up kicking a ball in the local streets. Trent is very much of that ilk, living with his mother and brothers in a suburb of Liverpool just three miles from the club’s training facilities.

Aged six, standing on a wall outside his house, he soaked up the cacophony of noise from Liverpool’s open-top bus, carrying the heroes of 2005 after a historical fightback against AC Milan. Watching his heroes with their hands on football’s biggest prize, he’s envisaged a similar future for himself ever since.

Fast forward to the present and his extraordinary rise to prominence reflects the era of a local boy made good.

It’s remarkable to think his entire career originated from a moment of pot lock. With the club sending invites to Trent’s school, the teenager’s name was plucked from a hat, gifting him a chance to attend Liverpool’s training camp. From there, it took just thirty minutes for the coach to realise his undoubted potential. 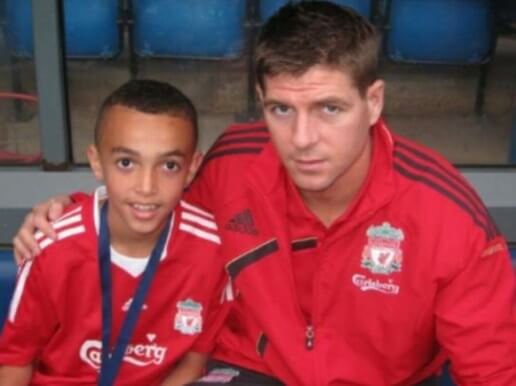 With a technique and skill like no-one else, he was handed the captaincy for Liverpool’s Under-16 side ahead of the 2014/15 campaign before making his debut for the under-18s in the same year. Such was the high regard he was held in, Alexander-Arnold quickly became captain of Neil Critchley’s side.

Possessing a strong eye for a pass and an engine to deal with the physicality and rigour of first-team football, it didn’t take long for him to rise further up the ranks.

Brendan Rodgers selected Alexander-Arnold for a pre-season friendly against Swindon Town in August 2015, one of his first appearances as a right-back. Further development under Pep Ljinders has seen the 19-year-old mould into a modern-day full-back, with the speed and flair to make a real impact in the final third.

That’s come on strides under Klopp, with a competitive debut in 25th October 2016 against Spurs in the EFL Cup a signal of trust and assurance of his talents. Less than three months later and he had his league debut against Middlesbrough, another ticking of the box in the young man’s career.

Nathaniel Clyne’s injury, albeit untimely for the player, was arguably the key turning point, providing the golden ticket for Trent to consistently showcase his talents on centre stage. From then he’s never looked back, gaining his first Premier League start against Manchester United at Old Trafford.

Despite being thrown in at the deep end, the Scouser showed just why he’s so highly thought of at the club, standing tall against the far more experienced Anthony Martial to stifle United down their left-hand side.

His stock has continued to rise, with stellar performances both domestically and in Europe taking his game to the next level.

Some may be quick to accentuate the struggles against Wilfried Zaha and Marcus Rashford as evidence that Trent remains a raw talent there to be exploited, while others will point to how the newest teenage sensation has become a first-team regular for Klopp’s side.

This isn’t a player resting on his laurels. It’s a focused young man constantly looking for ways to improve and fulfil his potential. In the 33 appearances Trent’s racked up this season, he’s been the embodiment of the modern day full-back, bombing down the right-hand side with the kind of ruthless exuberance of a forward.

Such was the accuracy of his cross to Mohamed Salah against Bournemouth, the Egyptian needed only the deftest of touches to direct the ball into the far corner. Add to that his two other assists this season and Trent’s natural ability could see him become one of the most effective creative full-backs in the top-flight.

Scoring a stunner on his European debut set the tone, whipping the ball over a seven-man wall and into the corner to make him the first Liverpool-born player to score for the club since Rickie Lambert in January 2015. It also marked the first Reds player to score a free-kick in a European game since Steven Gerrard in December 2014 – hardly bad company for the young man.

Manchester City targeted Trent in both legs in the quarter-finals, looking to isolate the right-back with quick interplay exposing his inexperience. Yet, it was the 19-year-old who emerged the victor in a stunning display of maturity that saw him quell PFA Young Player of the Year Leroy Sane; the perfect way to announce your arrival on the biggest stage.

He won four tackles and eight duels in the first leg, making 10 clearances and looking as experienced as James Milner in the process. The second leg was equally as impressive, with Alexander-Arnold notching more interceptions (13) and winning more tackles (7) across both legs than any other Liverpool player.

Captured fist pumping towards the Kop in a celebration that encapsulated his unrivalled passion, it was a fitting performance for a player whose future knows no bounds.

A teen playing for his childhood club, realising his dream as he bounced up and down to the beat of Allez Allez Allez in the Stadio Olimpico was quite a remarkable sight. Albeit far from his best performance of the season, his role in Liverpool’s journey to Kiev shouldn’t be underestimated.

Winning Young Player of the Year for the club in 2017 and 2018 are testament to the rise of the locally-born player, achieving the most interceptions (21), 2nd most tackles won (23) and 3rd most clearances (24) in the Champions League this season.

Gareth Southgate is merely the latest to sit up and take notice.

Last time Alexander-Arnold faced Belgium was in the under-16s World Cup where he was a GCSE student receiving lessons on Facetime while sitting his exams abroad. Now he sits in England’s first-team; the latest recognition for a stellar season in what represents a truly remarkable story.

Having risen to the top and performed with such maturity, it’s easy to forget that Trent remains a teenager. Yet, despite his youthfulness, there are very few people that don’t believe he’ll go on to captain both club and country.

As Pep Ljinders said, “some people are born to become footballers; he is definitely one of them.”