These games don’t come along every season, folks. Okay, maybe they have been for Real Madrid in recent years. But for other clubs, English clubs, in particular, they have to grasp onto the occasion and milk it for all it’s worth. So, as supporters, we need to do that, too. In fairness, we have been. The fanbase has been in excitement-overdrive since the night The Reds progressed in Rome.

It’s Liverpool’s first Champions League final since 2007. That night, The Reds lost to AC Milan, the team they had overcome on penalties two years previously, that night in Istanbul. Rafa Benitez kept Liverpool at the top end of European football until it all came crashing down, spectacularly, under Hicks & Gillett in 2010.

Thankfully, Hicks & Gillett were gone soon after, replaced by NESV (now FSG) as the club’s owners. A mini-revival under Brendan Rodgers meant Liverpool were back in the Champions League proper in 2014/15. However, it never felt like we belonged. Suarez was gone, replaced by Rickie Lambert and Mario Balotelli. Gerrard was another year older and slower. Real Madrid were actually in Liverpool’s group that season. Los Blancos beat Liverpool 3-0 at Anfield and 1-0 in the return fixture in Spain. The gulf in class that season was enormous.

But things have changed. Now, Liverpool are deservedly in the final due to playing some of the most exciting, frantically-paced football on show in this season’s competition. Real will be hoping that some things remain the same but it may well be a changing of the guard if Klopp’s soldiers go out and play their normal game. There will be goals, there should be plenty of goals. This game promises to be a fantastic showpiece for the clubs involved and for the sport in general. It will, no doubt, be the biggest game in the careers of some Liverpool players, maybe the biggest game they will ever play in.

Whatever happens in Kyiv, Liverpool FC has made me a proud supporter this season. We’ve got the manager everyone wants. Not because he’s funny and likeable, but because of his willingness to adapt and learn about the game every day and his criminally underrated tactical know-how. We’re playing the football all other clubs want to play (perhaps with the exception of City). We’ve got one of the best forward lines in Europe, and one of the youngest squads in England. It’s all good. So, drink it in. Lap it up. Enjoy every minute of this because you never know when we’ll get to experience it again.

“Pressure is working down the pit.

Pressure is having no work at all.

Pressure is trying to escape relegation on 50 shillings a week.

Pressure is not the European Cup or the championship or the Cup Final.

Up the Fucking Reds.

Real Madrid have only had one clean sheet in their last five games, conceding nine goals. They have scored 14 in that time, the 6-0 win over Celta Vigo being their only victory in that period. They lost 3-2 at Sevilla and drew 2-2 in three of those games – against Bayern Munich (semi-final, 2nd leg), Barcelona, and Villarreal.

Interestingly, Real haven’t been dominating any teams, lately. Their average xG rating of 1.82 coming in just lower than the average xGA of 1.9 in those games.

Liverpool’s form took a dip in late-April/early-May. The team was and still is, down to the bare bones, especially in midfield. Fatigue was a huge issue. But now, top four has been secured and the strongest eleven has been recuperating since the excellent win over Brighton at Anfield 10 days ago. Simply put, I don’t think form is going to be a problem on Saturday.

The main debate around Real’s starting eleven is whether Gareth Bale will make it. He has come into some form in recent weeks but it’s still hard to see Zidane going with the Welshman from the start.

I expect Isco to start at the pinnacle of the Real midfield, in front of Kroos, Modric, and Casemiro. Benzema and Ronaldo will be the front pairing.

Klopp doesn’t have options in the midfield. With Emre Can, Adam Lallana, and Alex Oxlade-Chamberlain all out injured, we know the midfield trio has to be Henderson, Milner, and Wijnaldum. Up front, it’s the usual suspects – Salah, Firmino, and Mané. Karius will remain in goals while the settled back four in recent months has consisted of Alexander-Arnold, Lovren, Van Dijk, and Robertson. It will be the same on Saturday evening. 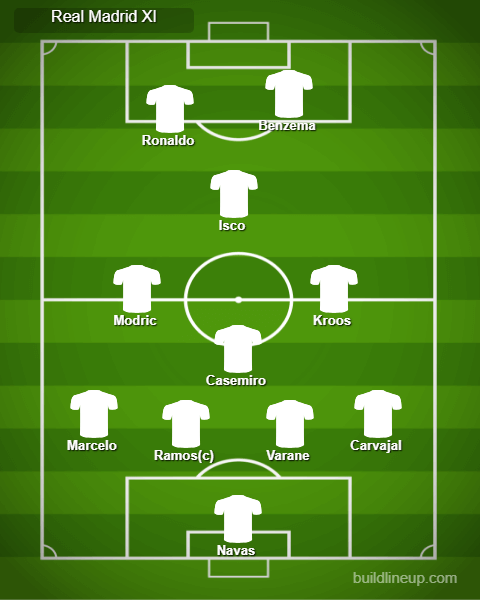 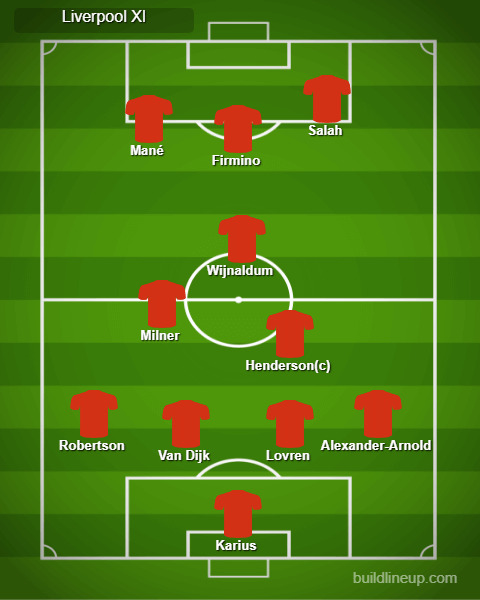 As mentioned above, Real were in Liverpool’s group in the 2014/15 Champions League campaign. Ronaldo and Benzema(x2) scored as Real won 3-0 at Anfield against Rodgers’ Reds. Liverpool fielded an understrength side for the return game at the Bernabeu as Rodgers had effectively thrown in the towel as far as European football was concerned for that season. Madrid won that game 1-0.

Liverpool’s last win against the Spanish giants was in 2009 when an in-form Rafa Benitez side destroyed Real 5-0 on aggregate in the Champions League.

This prediction, of course, is purely from the heart. I was never going to suggest a Liverpool defeat in our first Champions League final for 11 years. How this game is going to go is really anybody’s guess. But this Liverpool team cannot be written off, as they’ve shown on several occasions this season. Ninety minutes of football, that’s what it has all come down to. Real Madrid will be far too proud to sit deep and worry about Salah and co. That’s good news for us. Keep Ronaldo and Benzema somewhat quiet at the other end and we’ve got a chance.

If you are travelling to the game please stay safe and do us proud. YNWA.