If Liverpool’s pursuit of Fabinho was an old-school signing, bereft of a long drawn out process with a strangely anticlimactic moment at the end, Fekir was a good old-fashioned transfer saga.

From rumour to confirmation in under two hours, Michael Edwards wrapped up a deal for the defensive midfielder without any complications. The pursuit of Fekir however, was anything but.

Liverpool appeared to have a deal for £49million, rising to approximately £53m wrapped up, with the Lyon attacker pictured doing a welcome interview on LFCTV in the Red shirt only to be told it wasn’t happening.

Reports have since materialised that the club had concerns over the reconstruction of Fekir’s knee following an ACL injury in 2015. Lyon’s attempt to renegotiate terms failed and Liverpool withdrew from the deal, probably due to the risk involved.

Assuming negotiations can’t be resumed after the World Cup, Hakim Ziyech would be a great avenue to explore.

Coming through the ranks at Heerenveen, Ziyech made his debut at the age of 19 in 2012, establishing himself as a key first-team member before switching to FC Twente. There, he was the talisman, with his teammates heavily dependent on him to provide the creative source left void after Dusan Tadic’s departure.

He now plies his trade at Ajax as the highest rated player in the Eredivisie and will feature in the World Cup with his international team, Morocco.

Playing on the streets as a youngster, Ziyech is an exhilarating attacking player who thrives when given the freedom to roam and dictate the play. In essence, he’s your typical number 10, possessing the ability to glide past challenges with ease, showcasing his dribbling ability while constantly looking to make something happen.

“He creates in the literal sense of the word on the field. If Ziyech is on the ball something is about to happen in a positive or negative way. Usually positive.” – Sam Planting

The 25-year-old may, therefore, be the perfect alternative to Nabil Fekir, offering the creativity and dynamism of Philippe Coutinho while contributing directly in the final third. The 2017/18 season saw the Moroccan rack up 11 goals and top the Eredivisie for assists with 15 in a thoroughly impressive campaign.

To offer some comparison, I’ve looked at how Ziyech stacks up in comparison to other players touted to move to Anfield following Fekir’s failed move. 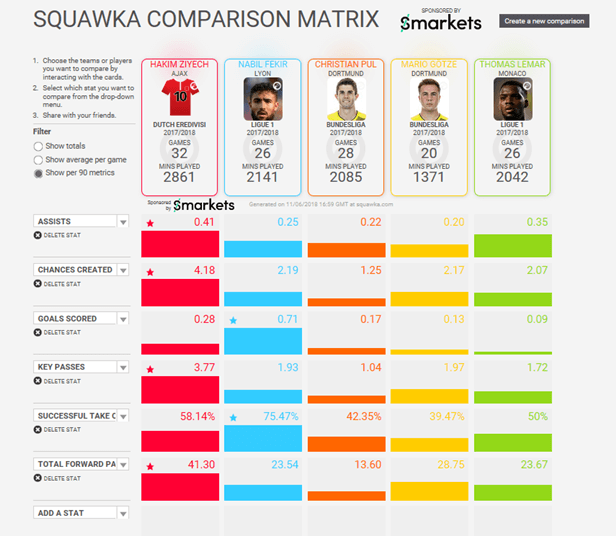 The 25-year-old possesses a good passing range and doesn’t shy away from risky passes to carve open chances for his teammates, completing 3.77 key passes per ninety minutes, far superior than any other player in the comparison matrix.

Thus, he represents a great option for Jurgen Klopp to assess following the failed move for Fekir, with the left-footed creative genius more than capable of moving to the Premier League.

He usually operates in a 4-3-3 formation as the more advanced midfielder in the trio. That’s where Ziyech would feature for Liverpool alongside new signings Fabinho and Naby Keita, able to roam forward and relieve the pressure on Sadio Mane, Mohamed Salah and Roberto Firmino to create their own chances.

Although his versatility enables him to play out wide, it inhibits his overall influence over the game with fewer opportunities to show off his passing prowess. Such freedom would bring the best out of the Ajax midfielder, adding an exciting new avenue for Europe’s hottest front three.

Roma have reportedly opened negotiations for Ziyech already, placing them in pole position to sign the attacking midfielder. Thus, Liverpool will need to act fast to rival the Italians for his signature. It’d certainly be a fruitful avenue to pursue after Fekir’s transfer saga.