You have probably already read reaction pieces and circled dates on the calendar. Even with the disappointing turn of events around Nabil Fekir failed (for now) transfer to Anfield the new season brings a lot of hope – a revamped midfield, a defence was very solid for over half a season and the magical attacking trio. But how about a more numbers-based approach on schedule. Last season, as part of my line up analysis series, I developed a somewhat accurate model to determine opponents’ strength. The method is fairly simple: opponent points per game (weight 50%), opponent venue points per game (weight 25%), opponent recent form (weight 15%) and opponent recent venue form (weight 10%). As there are no recent fixtures in the new season I decided to use each opposing team’s results against the Reds over the last three Premier League seasons as recent results. Furthermore, if a match is after a European game the fixture gets a bonus difficulty of 0.25 is added because LFC tends to struggle for results in such games. The assumption is that Liverpool will progress out of the group, I did not add the bonus past the CL round of 16. In the end, the numbers are normalised, so that the toughest opponent has strength rating equal to 1, while the easiest match on paper has a rating equal to 0. The newly promoted get the same points per game and venue points per game as the respective relegated teams. If LFC hasn’t played the opponent in the league over the last three seasons the rating is based on points per game(67%) and venue points per game(33%). 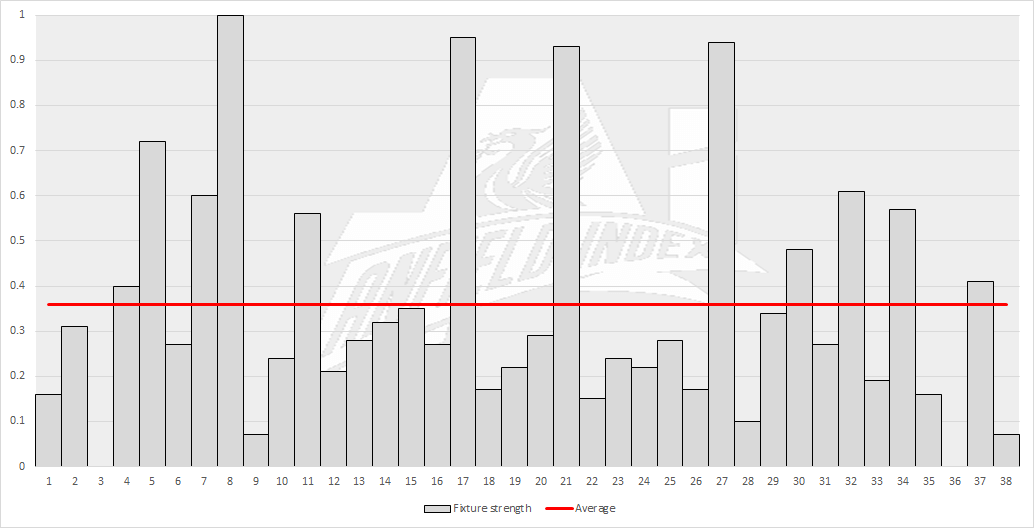 The y-axis shows fixture difficulty. The x-axis is the matchday number. The four clearly toughest fixtures in the calendar are against the two Manchester clubs. The Reds have been quite successful against City over the last three seasons however their quality makes them the toughest opponent in the league. On the contrary, Liverpool has had a lot of problems against the other team from Manchester – not a single league win in the last three seasons. Hopefully, the streak ends this season. The easiest matches on paper should be at home against Brighton and Huddersfield. Both teams struggled at Anfield last season and the same can be expected in 2018/2019. However, it’s worth noting that the Reds failed to win three of the four easiest fixtures last season – Stoke at Anfield and West Brom home and away.

To evaluate the hardest and easiest stretches of games the Reds have I made averages of every 3 and 5 consecutive fixtures: 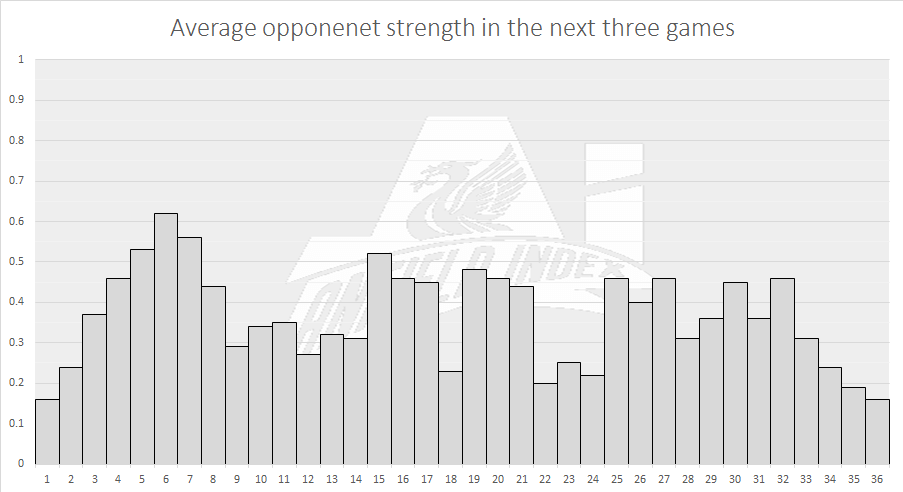 Our hardest three-game streak begins after a Champions League group stage match against Southampton at Anfield. The following two league games are at Stamford Bridge and home against Man City with another European game in between. We should be rolling at that point after playing the easiest three consecutive games in the first three matches. Winter will be tough with a few stretches of above average opponents around Christmas and New Year. The run in can be considered relatively easy and hopefully there will be something to fight for at that point.

The picture slightly changes if matches are grouped by five: 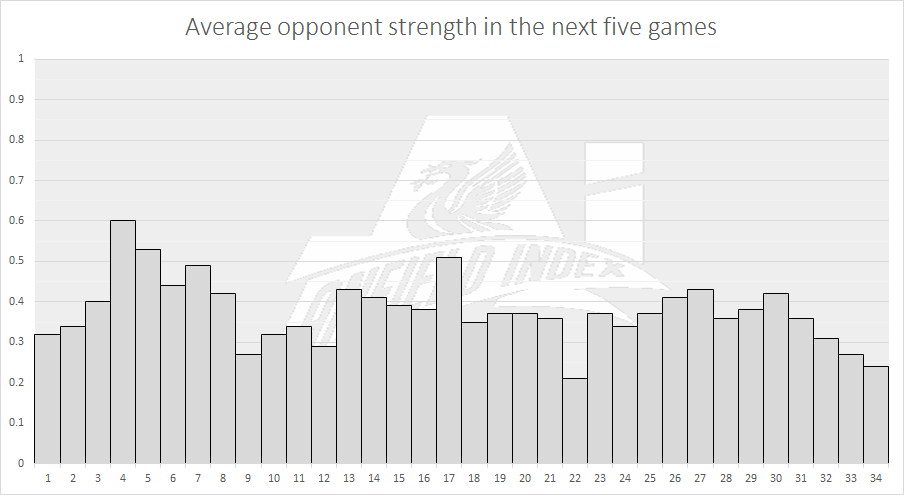 The hardest stretch is again early in the season and features the following opponents: Leicester (A), Spurs (A), Saints (H), Chelsea (A), Man City (H), with two Champions League games. The festive fixture stand out again as a tough. There are several very winnable matches starting with Fulham at Anfield on 10th November, which should get the team rolling before the rough games in December. All the five-game stretches starting matchday 32 have a below average opponent strength.

I think the schedule is well balanced. Especially in 2019, where there is no spike in the five-game grouping. That can help the Reds if they are on yet another crazy European journey to Madrid. The team is good enough to not care about who the opponent is – that’s why I didn’t put the names on the x axis. Klopp’s system works and he is not going to change much based on the opposition. Making the squad deeper will be key to the team improving in the league. Going all the way to Kiev took it’s toll on the domestic campaign last season – the Reds won 2.25 points per game when there was no midweek European fixture and the very modest 1.38 points per game in matches following a Champions League clash. The transfer window so far has been encouraging. Being optimistic in June is a feeling long forgotten for most of the supporters – doubters to believers indeed, Jurgen! Up the Reds!