On Saturday, Liverpool capped off their USA tour with a matchup against the hated Manchester United in front of over 100,000 fans at the Big House in Ann Arbor, Michigan. While it may have just been a preseason friendly between two teams missing several first-team players, it was more than a meaningless game. For starters, there is no such thing as a “friendly” between Liverpool and United. That was evident not only from the back and forth banter amongst the supporters at the match but also from the spice on the pitch right from kick-off. But more importantly, the match was a chance for thousands of Liverpool fans to see their heroes in real life instead of on a TV screen.

When you live close enough to your favourite team to see the games in person on a regular basis, you might take for granted the ability to watch them live. Being from Chicago, I do this all the time with the Chicago Cubs. Millions of people around the world have made visiting Wrigley Field a bucket list event, and while I make it a point to visit the great ballpark once a year, it’s not something I take advantage of nearly enough. Conversely, while I am a passionate Liverpool supporter, I only get to see the Reds when they visit the U.S. So, being able to head up to Michigan for a match was something I had to take advantage of. And I wasn’t the only one who felt that way. A few fans next to us in our section near the Liverpool end drove all the way from Omaha, Nebraska to the match, which is roughly a 10-hour drive. To put that into perspective, even the drive from Liverpool to Brighton is only 5 hours. But when you have the opportunity to see Jurgen and the Reds, you simply have to do it. 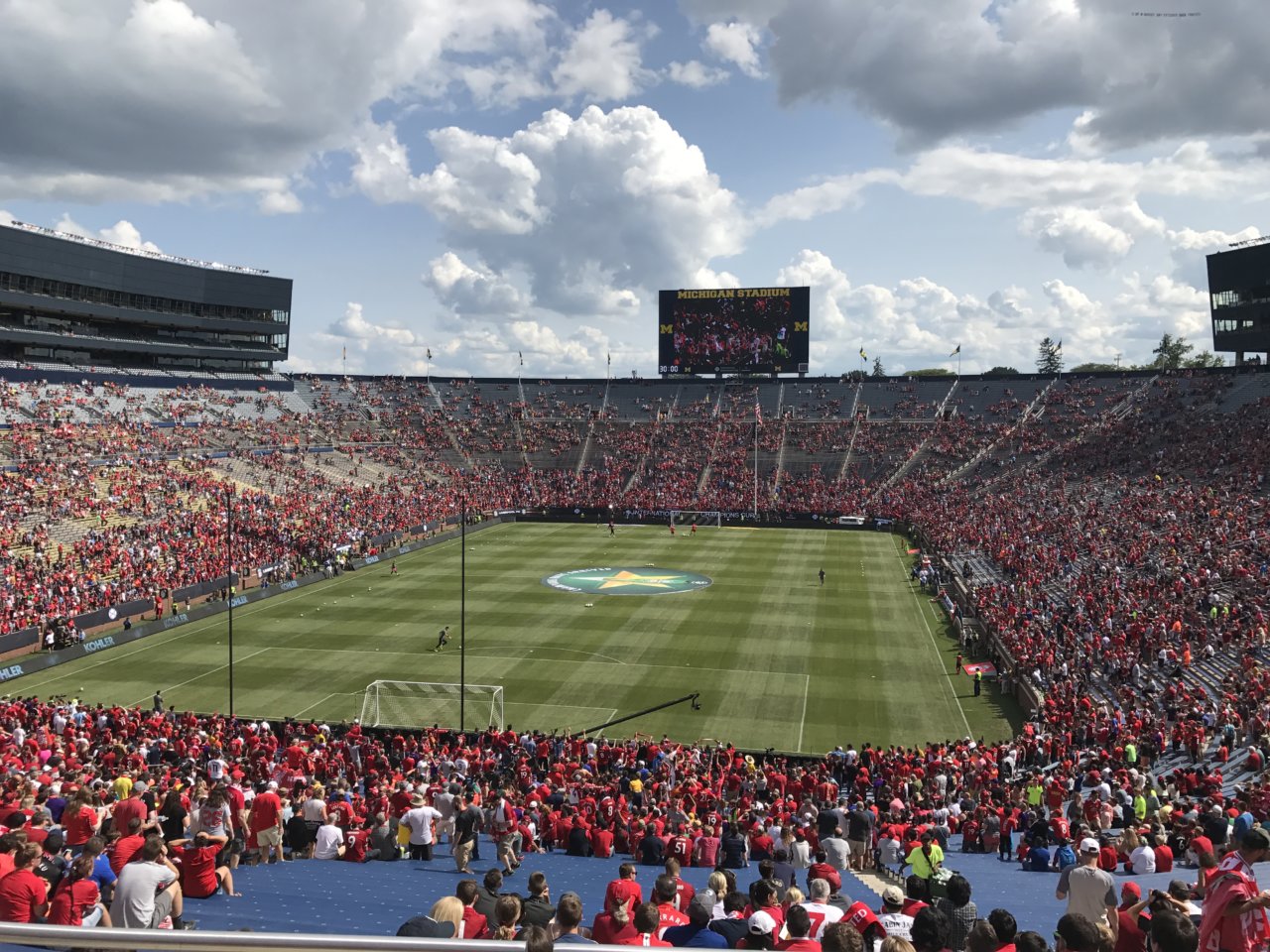 Big occasion at the Big House.

Upon arriving to the stadium, it was clear that the passion of the fans would elevate the importance of the event. Lawn parties and tailgates were in full force hours before kickoff, and BOSS Night was bringing some of the Liverpool atmosphere to the game with a concert. Even an hour before kickoff, the place was filling up with fans eager to catch any glimpse of the players. The crowd seemed about 50-50 between fans of the two teams, but you wouldn’t know it from the noise made by the Liverpool fans when the Reds finally jogged out. The United players came out first to plenty of cheers from the United end and some boos from the Liverpool end, but the sight of Mo, Mane, Big Virgil, and the gang brought a good amount of cheers.

What was most striking is that even for a friendly half a world away, Liverpool fans couldn’t stop signing “Allez, Allez, Allez” from the moment they arrived. It was sung outside the stadium. It was belted out in the concession lines in the stands. It was sung before warm-ups, during warm-ups, and generally any time things got a little too quiet for anyone’s liking. It was a common anthem meant to pump up the LFC fans and needle the United fans who made the wrong decision to sit near the Liverpool end. It was easy to see why the song absolutely blew up last spring. Whereas United fans sang “Glory, Glory” once or twice, “Allez, Allez, Allez” could not be topped or matched. The only thing that came close was near the kickoff when Gerry & the Pacemakers came on the sound system, and Liverpool fans all over the stadium lifted their flags to sing “You’ll Never Walk Alone.” Michigan Stadium wasn’t Anfield, but I still got goosebumps all the same. 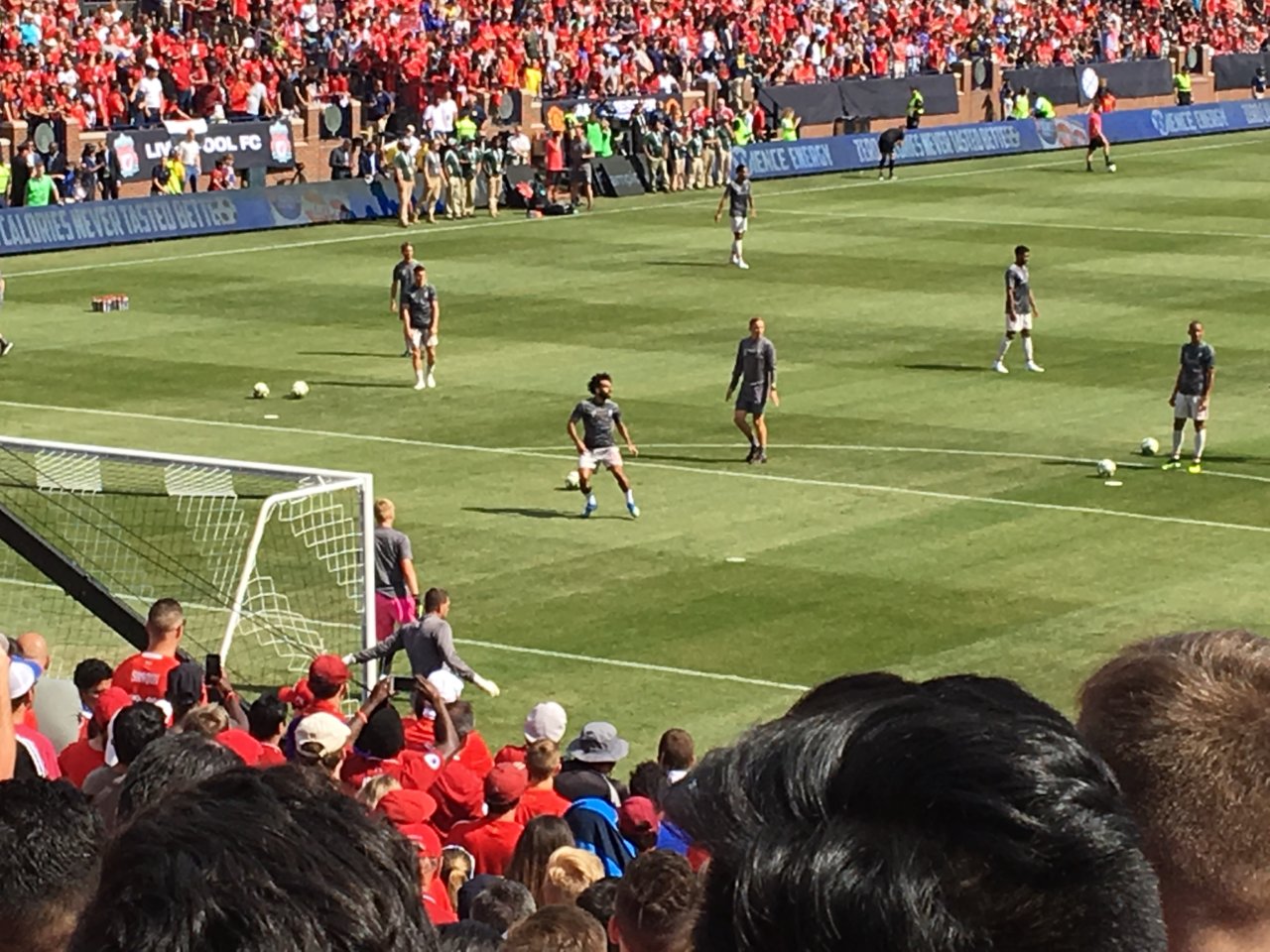 The King warming up.

However, the atmosphere still came second to finally seeing many Liverpool players in person for the first time. Van Dijk coolly putting in a physical display by winning every header and using his strength to muscle Sanchez off the ball. Milner putting in a grinding shift all over the pitch. Lallana sporting a goofy haircut. Moreno looking like a lightning bug going up and down the left wing (one of my favourite moments was during warm-ups when Van Dijk patted him on the head like a dad does to his son). And of course, Mane and Salah generally terrorising the United backline and being anywhere and everywhere at once. While the level of competition has to be factored in, Sadio and Mo are simply a cut above almost any opposition they face. This was evident in New Jersey against Man City, and they quickly made their presence known in Michigan. Their threat and skill was simply breathtaking and worth the price of admission alone.

The start of the match was punctuated by some physicality not usually seen in a “friendly.” Ander Herrera, of course, added some shithousery to the proceedings because well, he is Ander Herrera and offers little else. Even Jose got in the act with catching an errant ball out of bounds and making a production of handing it to Milner for a throw in to slow things down while trying to seem like he was being a good guy giving Milly a pat on the head. Unsurprisingly, no one bought it. However, Liverpool didn’t back down one inch and began to create the chances becoming of a team fielding Mane and Salah. After Mane coolly dispatched his penalty to make it 1-0, it felt like the Reds could blow the match open. However, a silky free kick goal from Andreas Pereira levelled it against the run of play.

While Salah and Mane couldn’t restore the lead and wouldn’t be playing more than 45 minutes, the second half started off with some excitement when it became apparent that Shaqiri would be making his debut. A couple of my fellow Americans kept referring to him as “Softballs” in homage to Xherdan’s enormous orb-like calves. What was surprising was how dangerous he was from the off. He looked more like someone who had been playing in a Klopp team for years than a debutante. His strength, balance, and positioning led to his assist for Daniel Sturridge, and from there, the rout was on. United conceded another poor penalty, and it was hilarious to see Sturridge try to take the ball off Ojo only to be sent packing. It initially appeared Sturridge was annoyed at the youthful Ojo taking the penalty, but after Ojo nonchalantly put it into the back of the net, Sturridge walked back up the field with his arm around Ojo in a cool moment. Clearly, Klopp’s management style really is having an impact on the squad.

The moment of the match, and really the whole day, was the Shaqiri bicycle kick goal. I have never set foot in Anfield, let alone the city of Liverpool. I wasn’t there when the Ox buried that second goal against City in the Champions League. Or when Liverpool came back against Dortmund in 2016. Or when Gerrard absolutely laced a belter from outside the box against Olympiakos. However, I would like to think the crowd’s reaction when Shaqiri found a pocket of space right outside the six-yard box and rose up to score a worldie was a small taste of the roar on those nights. Even in an exhibition match, it was a legit moment, and the crowd went absolutely nuts. People were jumping all over, and I held my daughter in the air like she was the Jules Rimet Trophy. We had the perfect vantage point in the Liverpool end to see Shaqiri set himself up perfectly for the shot, and it was one of those moments that are the exact reason why you pay to go to a live sporting event (regardless of what the curmudgeon Mourinho says). 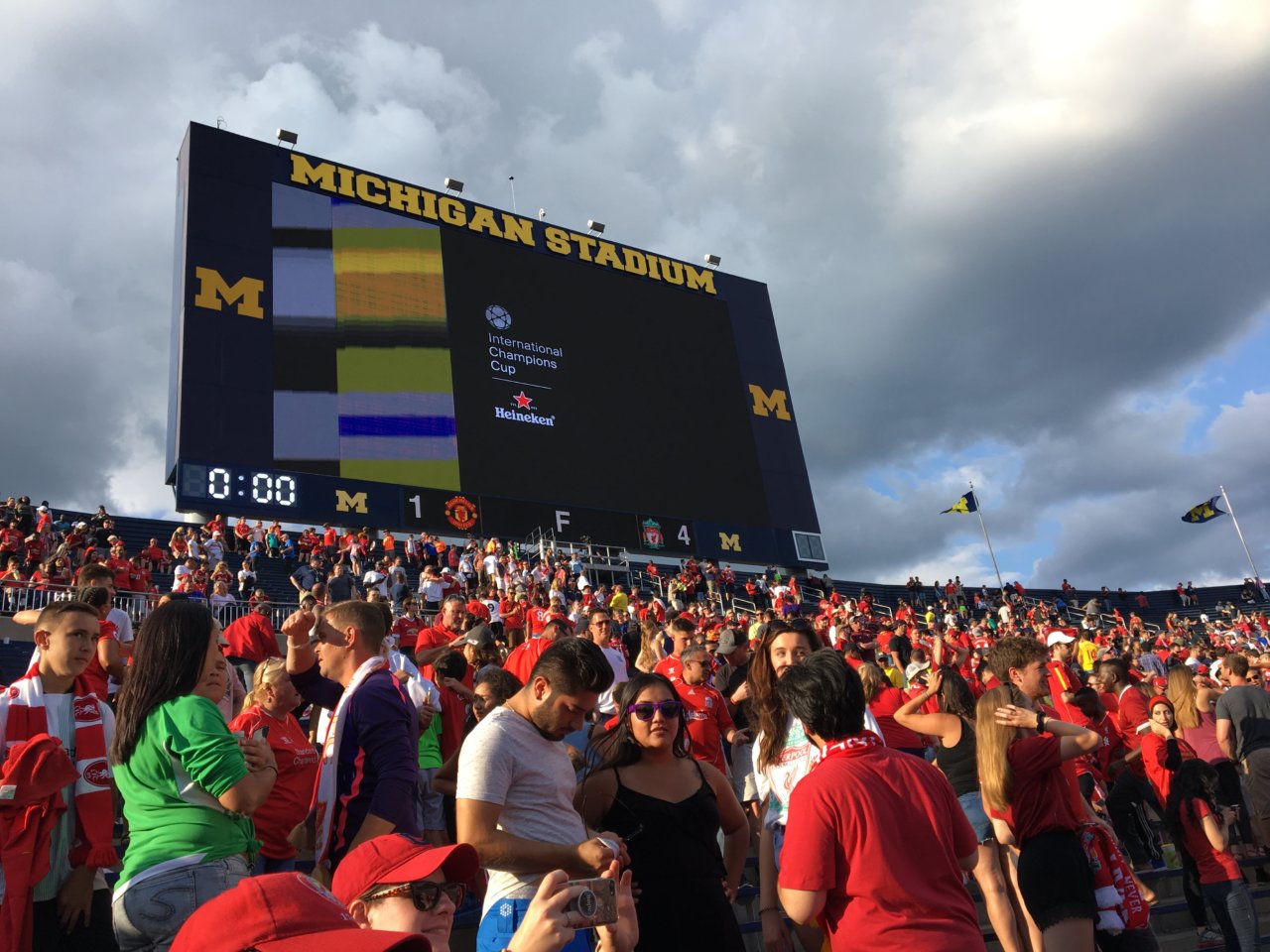 After the final whistle blew, Klopp and the team did a lap of honour around the stadium to celebrate with the fans on a fun win and tour. It feels odd to use the word “celebrate” a friendly win, and the cynics would certainly laugh at the notion of celebrating a win in the ICC, especially after Liverpool have fallen short in the past few years in cup finals. Yet, the whole event truly did feel like a celebration of Liverpool’s growth in the past few years and potential for where the Reds can go from here. The contrast between the malaise and discontent brewing at United was stark. There was genuine joy amongst both the LFC fan base and the team missing from the Mancs. Even when a Liverpool player accidentally booted the game ball into the stands during the lap of honour, Klopp merely put his hand over his mouth, laughed, and gave the fan who caught the ball a big thumbs up. The enthusiasm of the team was infectious, and the players seemed happy not only to win but to be playing together again in front of adoring crowds while building towards something big.

A club with Liverpool’s history should have the main target to win trophies every single season and not just make the top four and be competitive, but we shouldn’t ignore the small moments along the way that make up the journey. Being a supporter isn’t just celebrating when there’s a trophy. Any bandwagon fan can do that. If you focus only on silverware, you miss the fantastic moments that make being a football fan worthwhile. Last season was equal parts thrilling and heartbreaking. Saturday’s match and this entire preseason tour felt like the turning of the page to where LFC is going next. After all, the song isn’t called “Allez, Allez, Allez” for nothing.