The season is finally underway. The transfer window was shut early – Premier League clubs spent over 120 million pounds on goalkeepers, breaking the world record twice. Three of the top six will have new numbers ones in the coming season with Leno, Alisson and Kepa taking the place between the posts for Arsenal, LFC and Chelsea respectively. The market was so inflated that the Reds managed to sell our 25-year-old third choice keeper for 12 million pounds. Danny Ward didn’t record a PL appearance last season and has a total of 2 matches at the highest level of English football in his career. All hail our saviour – Michael Edwards. With all the movement and changes I will lay down an in-depth statistical analysis on the PL goalkeepers, including the newcomers.

The most essential goalie skill. At the time of writing this the best shot stopper in the league from last season has already contributed to his team winning a game – de Gea was back to his old antics against Leicester on Friday. To quantify the shot-stopping ability of goalkeepers I took into account the quality of the shots they faced (xG per shot on target) and the save percentage. It is normal to expect keepers who face easier shots on average to save them at a higher rate.

The black lines represent the league average. The red ones are the top six average. I added Jan Oblak to graph because he should be considered at a worst a top three keeper in the world if not the best. The graph clearly indicates that some keepers have it much easier than their colleagues. Lloris, Ederson, Courtois, Speroni and Schmeichel faced relatively easy shots, while Dubravka, Mignolet Gomes and Karnezis had to save clear chances at a much higher rate. There are several outliers in the list:

Passing patterns vary in keepers depending on the team’s set up. For example, Nick Pope can boot the ball downfield every time it is passed back to him while Ederson almost exclusively tries to pass the ball to a teammate that is close to him and initiate an attack from the back. Those are the two extremes. You can still tell a lot about a team’s tactics by the goalie’s passing numbers. 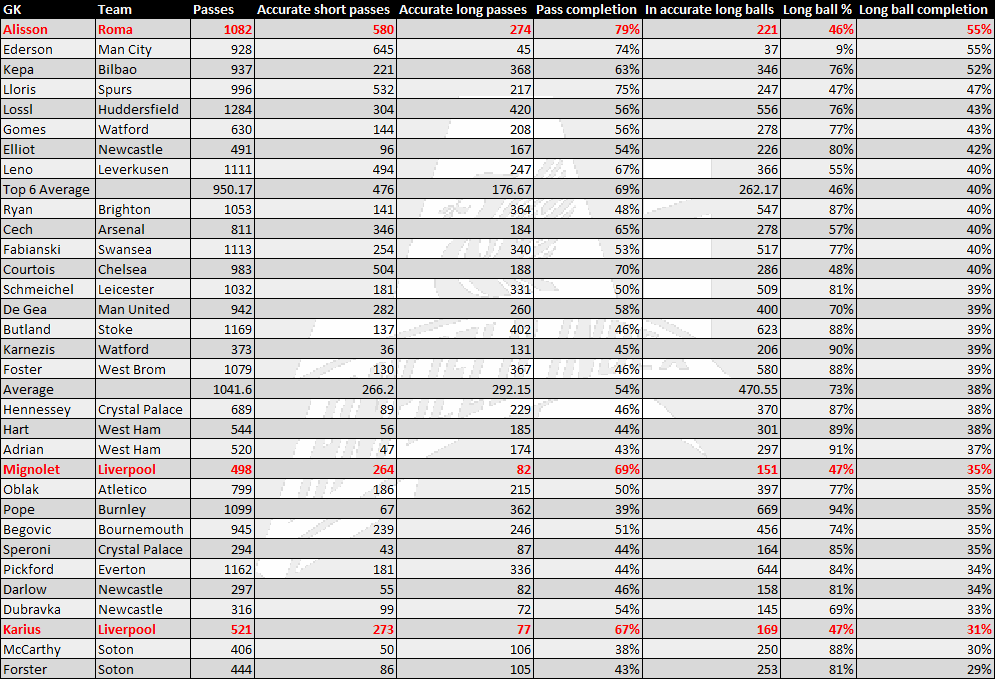 The top six keepers are asked to do more with the ball – just 46% of their passes are long compared to a 73% league average. De Gea is the only top-six keeper to use the long ball more than 60% of the time, not a surprising fact. Only three goalies on the list managed to pass the 50% long ball completion mark – Ederson, Alisson and Kepa.

Alisson’s numbers are incredible – he leads the pack in both pass completion and long ball completion while going for long passes nearly half the time. Of course, he had a bigger target to aim for in Roma than he will this season so it is possible for the accuracy to drop. Even with a slight drop in his numbers, the Brazilian will still be a massive upgrade to both Karius and Mignolet when it comes to distribution. Both were below league average with their long ball completion, Karius being in the bottom three.

Sweeping numbers are also affected a lot by the team’s tactics and may not accurately represent the keeper’s ability. It’s expected that the goalkeepers of teams which play a high line sweep more. Unfortunately, I couldn’t find the stats from the Bundesliga, Seria A and La Liga so the list only includes Premier League players from last season: 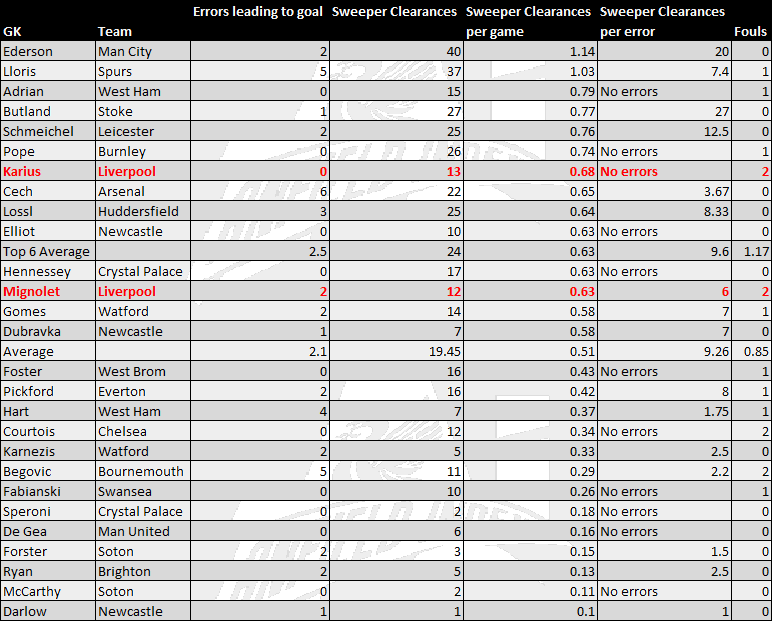 Ederson and Lloris and the clear outliers. No other keeper is even close to them. Ederson has only three sweeper clearances more but also three errors leading to goals. Man City’s Brazilian keeper was head and shoulders above everyone else in the league last season. That ability of his the main reason why just a year ago Ederson became the most expensive goalie in the world. One can say that breaking the world record fee for a goalkeeper paid off for Pep Guardiola.

Obviously, the number ones of more defensive teams such as Brighton, Southampton and Man United are at the bottom of the list. There isn’t much room for sweeping when the defensive line is deep.

Looking at where LFC’s keepers are in the list we can safely assume that Alisson will not be a downgrade. Karius and Mignolet have just 25 clearances between them, committing two fouls each. The Belgian also has two errors leading to a goal. Given that both played exactly half a season those numbers are in no way impressive. The German was largely praised for his ability to sweep but while brave and decisive most of the time his output was nothing special. When we add that to the passing numbers in the previous paragraph the conclusion is neither of our keepers last season was above average with the ball in their feet and Alisson will improve that.

It’s very hard to quantify the goalkeeper’s ability to deal with crosses. To be able to do that we need to identify which crosses are “punchable”, which are “catchable” and which cases the keeper should just stay on the line. There is no public data source that does that and even if there was one it’s not an exact science and it depends on so many factors. With that being said below is a table that presents the only official stats regarding keepers and crosses: 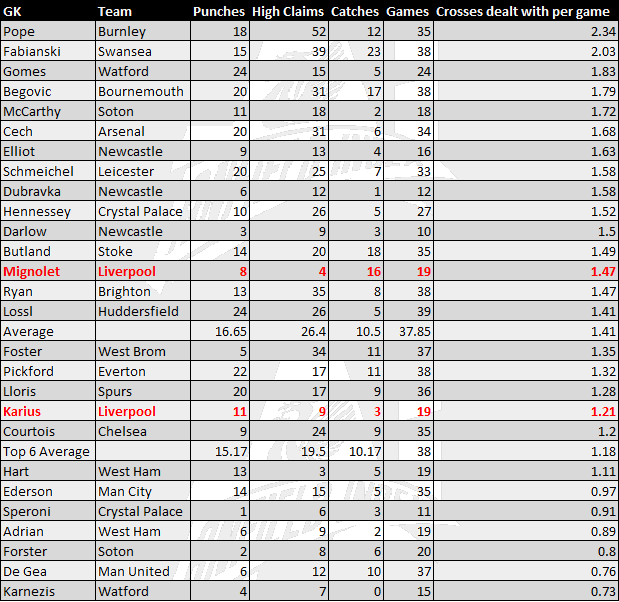 Again I couldn’t find any data for Seria A, the Bundesliga and La Liga so only PL players from last season are presented. Nick Pope managed to deal with the most crosses, which is not surprising given Burnley’s style of play. Perhaps surprisingly de Gea is at the bottom of the list.

Karius dealt with fewer crosses than Mignolet. That can be attributed once more to the van Dijk effect. Having the Dutchman in the side makes the goalkeeper’s job easier.

Alisson to the rescue?

Spending so much for keeper can be considered madness. But when you look at Alisson’s numbers compared to Bernd Leno, for example, you see why we needed to break the bank for him. The former Leverkusen goalie cost 20 million pounds and isn’t anywhere near our Brazilian in any of the metrics. The question now is can Alisson replicate his form in the Premier League? He is so much better than both Karius and Mignolet in every category I compared, he also starts in front of Ederson for Brazil. He will have a full season of a van Dijk lead defence with Fabinho shielding it. So yes – the set up is perfect for the now second most expensive goalkeeper in the world to justify the fee paid for him. Barring serious injury problems (which we already have with the Lovren situation) LFC is set to have its best defensive season in a decade. Alisson is a huge part of that.