Liverpool picking up where they left off at the end of the 2017/18 season would have been the perfect way to kick start a league season, and Liverpool did just that. There were 92 days between Liverpool’s last home league game against Brighton and the opening fixture against West Ham, but the results were identical: 4-0 drubbings. However, while the results may have been the same, the personnel and the tactics were certainly not.

Alisson and Keïta were the only real changes to the teamsheet, and whilst the on-ball 4-3-3 and off-ball 4-5-1 formations were largely the same, the midfield took a far more proactive creative and offensive role than they did last season. For this particular analysis, we’re going to focus on the midfield, its positional fluidity and the roles prescribed to the players by Klopp.

James Milner and Naby Keïta were key to this. Milner, in particular, drifted wider, as Keïta floated in a closer proximity to Wijnaldum. Milner would move wide to support Alexander-Arnold in the build-up, and would also join attacks, either as a runner into the LCB-LB half-space, or – as we see with one of Liverpool’s first big chances – as a winger.

You can also listen to me discuss this game on AnfieldIndex Pro’s Tactics Weekly show for FREE with a 7 Day Trial which includes a weekly show with Jan Molby and the best stats show around – AI Under Pressure. A snippet of the show is included below.

The two images below show Milner first looking to attack the half-space, but as Wijnaldum delays the pass, he curves his run, around the back of the WHU LB, and eventually receives the ball from Alexander-Arnold.

The importance of Milner doing this is two-fold. The initial movement he makes is one we usually see from sides looking to exploit the central spaces, as we know Liverpool really love to do. However, where Liverpool struggled a great deal last season was against teams which decided to sit back and defend those central areas with numbers – as WHU tried to do for the opening 20 minutes. Milner recognises this, and actively seeks out the space in the wide area, which WHU are willing to let Liverpool have the ball in.

WHU’s high and rigid back line, roughly positioned on the edge of the area means there’s space in behind to exploit, with a cross. Milner does so, and with the pace of Salah and Mané in situations such as these, we usually expect them to score – as it happens, Firmino just misses out on touching the ball in, but this is an example of LFC’s tactical strengths, but also considerable tactical naivety from WHU. 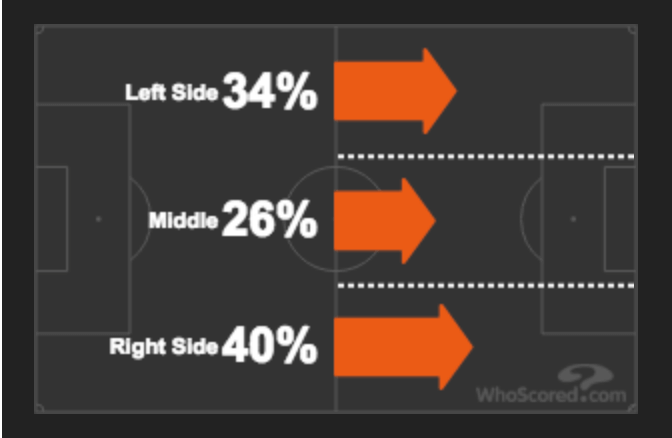 The images below, exclusively from the first 10 minutes of the first-half, show Milner actively looking to join attacks. In the opening 5 minutes, I counted Milner making offensive runs, such as these towards the opposition box three times. For a player to do so with such frequency in such a short period of time indicates that this is very likely a tactical instruction from Klopp, as he looks to get his midfielders to support the forwards.

Indeed, as the images below illustrate, Liverpool’s midfield was joining up with the attack in considerable numbers. This, naturally, allows for Liverpool to overwhelm and blast through opposition defences but also leaves Liverpool potentially exposed on the counter-attack.

What Liverpool did to nullify this threat was simple, they made tactical fouls. Milner made 3 fouls and Wijnaldum and Henderson both made 2. As the Stats Zone graphic below shows, these fouls were largely made in and around the middle third of the pitch, with Jack Wilshere being fouled 5 times, and Michail Antonio also being fouled twice – all in the middle third. 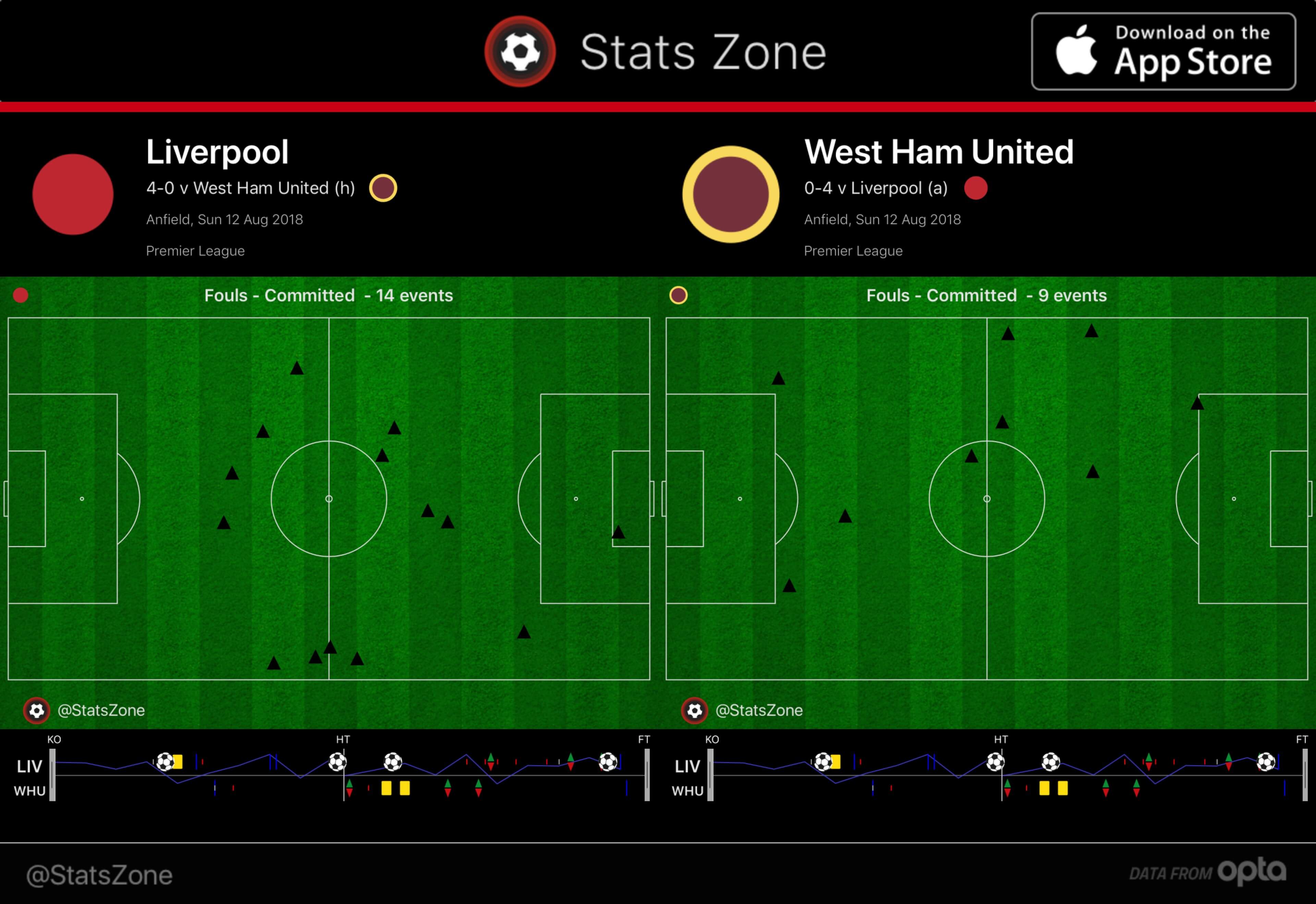 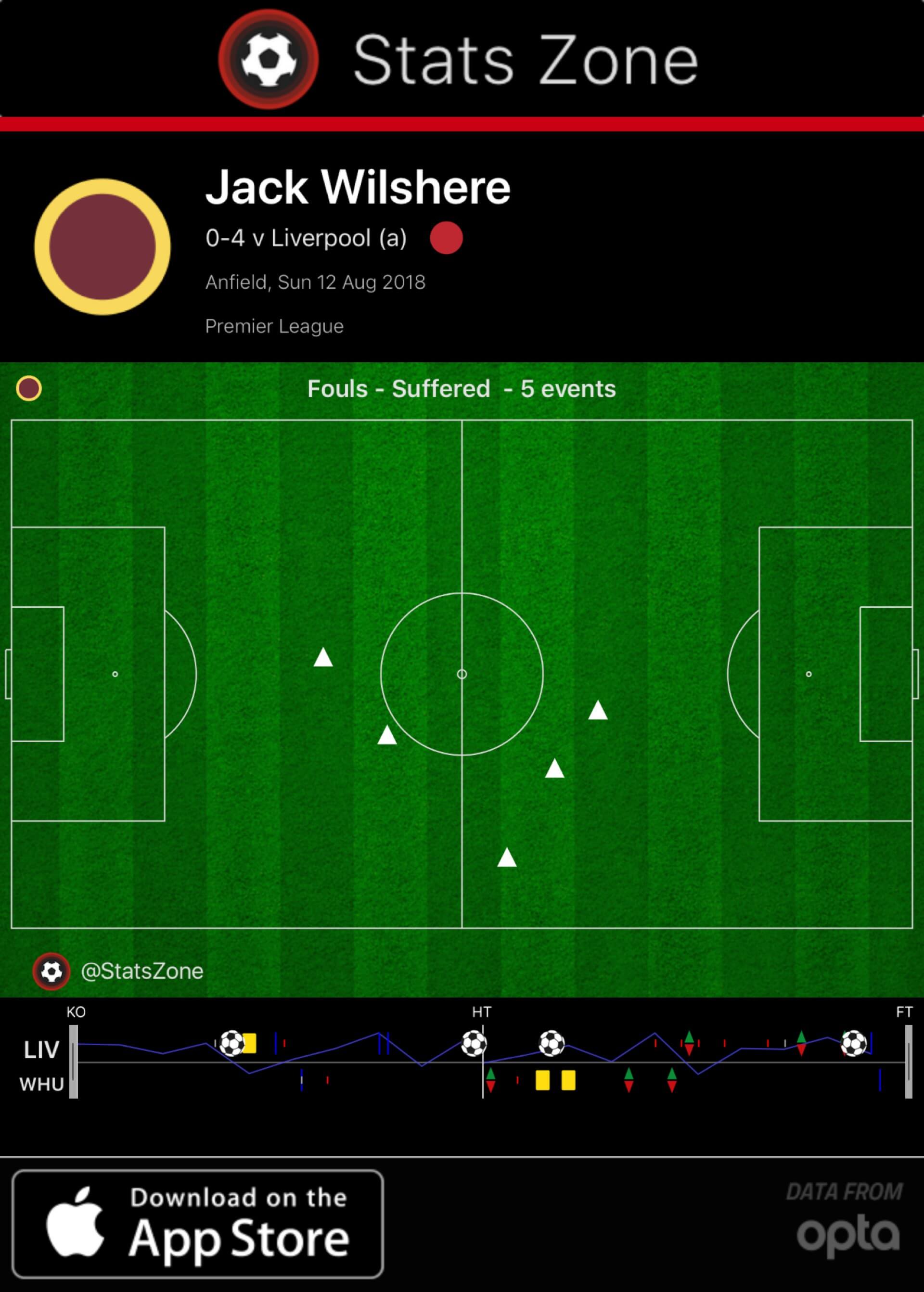 Liverpool also used a lopsided offensive structure to guard against counter-attacks too. So while Alexander-Arnold and Robertson pushed up frequently during the matches, they would not do so simultaneously, instead, one would stay back when the other advanced.

It was not just Keïta and Milner who were aggressive with their movement, Wijnaldum, who seemed to be the no.6, i.e. the deepest lying CM, was also looking to move forward and break lines.

Two mins into the first half, Keita had the ball on the left touchline and passed laterally to Wijnaldum, who, as the nominal six took the ball and attempted to break the West Ham midfield line through dribbling. WHU turn the ball over, and LFC break up play with a foul, but it clear to see the intention for Liverpool’s players to take on opposition players through dribbling, and thus breaking opposition lines. 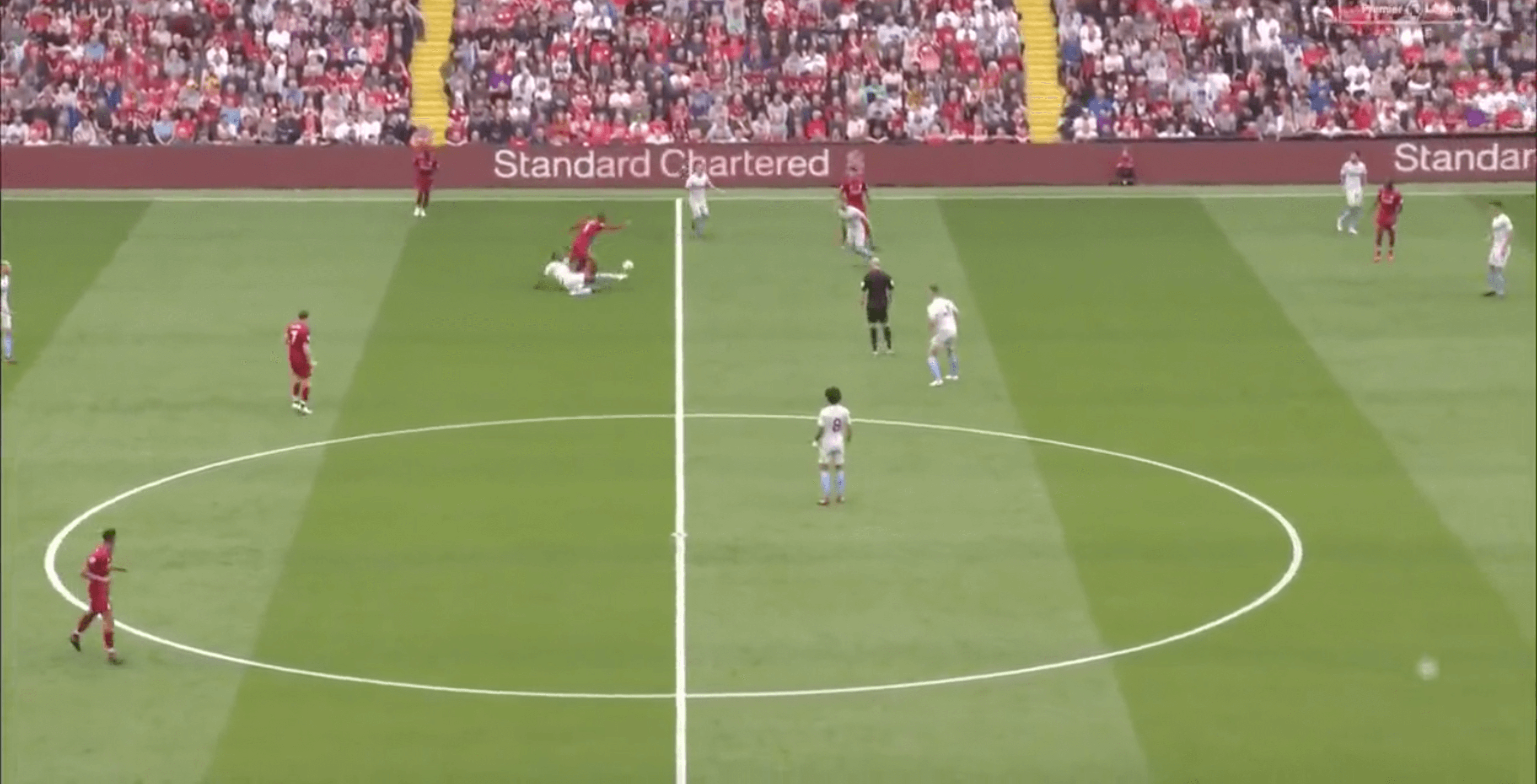 One issue which WHU had though, which only encouraged Liverpool to try and break their midfield line more often was that the WHU midfield was often very flat and while this in itself is not a huge issue, when coupled with the space left between the midfield and the defence, it allows players such as Keïta, Mané, and Firmino, who all love to drop off and roam, swathes of space to operate in.

For example, in the moments preceding Liverpool’s third goal, Gomez’s pass from deep takes out three players and gives Liverpool the ability to move straight onto the WHU back line. Firmino, who had dropped into midfield as the spare man, then runs free unmarked and onto the defence.

Liverpool were able to break lines not just through the work of the midfield though, but also due to the work of Alexander-Arnold and Gomez. The two images below show Gomez carrying the ball forward, and then passing it into Milner, whose body position allows him to recieve the ball and immediately transition himself into an offensive position.

Just watching the MOTD highlights and realised what a superb pass TAA plays into Keïta for LFC's first goal.

TAA takes out four WHU players, and gets it to Keïta in a central position on the edge of the attacking third, bypassing the WHU midfield & setting up a 3 vs. 4 situation pic.twitter.com/C8vAW0OIZK

The last feature of the midfield I’d like to look at though is the fluidity mentioned earlier. I referred to Wijnaldum as the nominal six, and that’s because while he started the game as the no.6, over the course of the game he found himself swapping with Naby Keïta on the left channel, breaking forward and contributing to attacks as one of the no.8s (i.e. the two CMs ahead of the CDM) usually do. Milner also found himself dropping deep at times, holding his position and working with the defence in possession build-up as the team looked to move the ball forward as well.

This positional rotation and fluidity was not just within the midfield though, as Sadio Mané swapped with Naby Keïta on occasion. For example, in Liverpool’s first big chance of the first half, the cross into Firmino & Salah was missed by both players and west past Mané. However, prior to the cross being made, Mané and Keïta occupied roughly the same position on the edge of the 18-yard box, and whilst Mané attacked the six-yard box with his run, Keïta waited in that area.

In the graphic below, we can see they’ve swapped their roles, as Keïta looks to attack a potential cross.

The 2017/18 season was one of the most exciting campaigns in recent years, but throughout it, there were tactical hiccups, be it limited attacking out wide, or struggling against low blocks. Liverpool now seem prepared and equipped to face up against the problems which cost them in key games. It appears that the tactics employed in this game at least are geared towards an even more offensive approach than the one seen last season, whether this is the tactical endgame or simply another stage of evolution in Klopp’s mind is yet to be known, but one thing is for sure, we better strap ourselves in, for if this fixture is just the beginning the end may be spectacular.