Jurgen Klopp’s first game in charge back in October 2015 saw Adam Bogdan, Kolo Toure, Connor Randall, Joao Texeira, Joe Allen, Jerome Sinclair and Jordon Ibe feature on the bench – none of whom are still at the club.

In contrast, the bench against West Ham on the opening game of the 2018/19 Premier League season contained Fabinho, Henderson, Lallana, Shaqiri and Sturridge – five players capable of changing the outcome of the contest.

Key to such a strenuous rebuild has been Klopp’s steadfast loyalty to recruiting certain targets. Virgil van Dijk and Naby Keita fall into that category, with Liverpool desperate to sign the latter last summer having delivered consistent, top draw performances in the Bundesliga. The Reds were instead made to wait a year, activating his release clause in advance in a deal worth £53million deal amid interest from Spanish giants Barcelona.

Albeit frustrating having to sit in wait, his continued form in the Bundesliga amid a delayed arrival at Anfield only enhanced hype with Keita tipped to be the final piece of the puzzle in Klopp’s midfield.

Moving to a new country, featuring in a new league and tasked with shouldering the responsibility of Liverpool’s N0.8 shirt formerly worn by Steven Gerrard, you’d have forgiven Keita for taking a few games to settle into his new surroundings.

Instead, he delivered a full-proof performance from the first whistle to the last, dazzling in midfield with confidence and class in equal measure. While only the first game of the season, his display offered an insight into what’s to come over in his Liverpool career – an environment he will undoubtedly flourish in behind the world-class talents of Mane, Salah and Firmino.

Gliding across the turf, Keita picked up the ball in a pocket of space between the West Ham midfield and defence before his perfectly weighted through ball effectively put the right-back out of the game. A pass put straight into Andy Robertson’s stride, the Scot was able to run onto it, subsequently flashing a first-time cross into Mohamed Salah for the opening goal.

18 minutes later and there was almost a carbon copy of the move. Keita spread the ball out wide before Firmino’s cross culminated in Salah’s close-range shot – an effort expertly saved by Lukasz Fabianski but one that the Egyptian will wish he buried as he eyes another record-breaking campaign.

As shown by the following heatmap via Who Scored, Keita covered several key areas of the pitch, picking up pockets of space all game. Crucially, this dragged players out of position while simultaneously freeing space for Roberto Firmino, Sadio Mane and Mohamed Salah in attack. 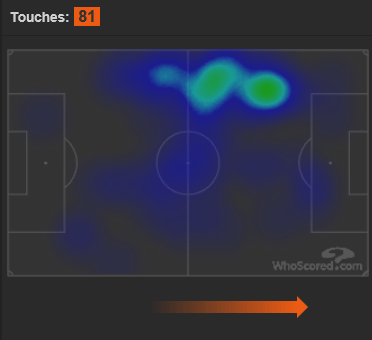 The exhilarating front-three will be beaming at the thought of having Keita put chances on a plate throughout the campaign, carving open even more opportunities in the push to challenge City for the title. Similarly, the developing partnership with Daniel Sturridge shown during the course of pre-season offers Klopp further flexibility; a striker with incisive movement on and off the ball, Sturridge is also the perfect partner for Keita’s vision.

Last season, his direct style of play saw him average 3.36 take-ons per game. Sky Sports’ Andy Hinchcliffe accurately pointed out the different aspects to Keita’s game; releasing passes early, the 23-year-old can offload the ball before moving into space and receiving it back. Equally, he possesses the confidence and nous to beat players in tight areas. Much like a pick ‘n mix, you’re not sure what you’re going to get but whatever it is, it tends to be good.

From a defensive standpoint, that’s an absolute nightmare. Sunday’s game saw West Ham initially get tight to Keita, a situation in which the Liverpool man was easily able to wriggle out of via the use of fast one-twos. Standing off was equally unsuccessful; allowing the Guinean time and space culminated in Liverpool’s opening goal of the season. Whatever way they opted to defend, Keita seemed to be one step ahead and able to get one up on his opponent. Such inability to read his next move will give the Reds additional creativity for the campaign ahead.

Likened to N’Golo Kante for his defensive discipline as well as possessing the vision and creativity to drive forward from deep, Keita’s superb ball retention and recovery reflect no obvious weaknesses to his game. The 23-year-old recovered possession eight times against West Ham while completing one interception and one tackle – an indication of how one-sided the affair was but also how dominant he was in all areas of the pitch.

Still, only 23 years of age, Keita’s first performance in the Premier League lived up to all the hype. What’s more, he still has his prime years ahead of him and looks completely unfazed by the responsibility that comes with such a historic shirt as the No.8. Operating behind one of the most prolific trio’s in world football, Keita’s game will blossom to the next level while simultaneously adding the missing piece of the puzzle to Liverpool’s midfield. Yet again, Klopp was right to wait for his man.