Four games, twelve points, a single goal conceded. The supporters couldn’t have hoped for a better start of the season. Or could we? The Reds aren’t really blowing teams away, one can perhaps label our last two victories scrappy. Liverpool supporters can make a great case study on human nature. It’s been exactly ten years since the last time the club was realistically considered as a title challenger. Since then we’ve been largely irrelevant at the domestic stage come May with one fluke exception on the back of a crazy fluke season. After so long fans want everything to be perfect and some among us tend to overreact and panic when the team rides its luck – after all, it’s been going against us for a decade now –  the slip, the meltdown at Selhurst Park, so many lost finals now. In a way, we assume that when the players leave the slightest of a chance of things going wrong, they inevitably will. I don’t blame those fans – it’s a normal reaction. However, in the past couple of seasons, there has been a huge change of the mindset both at the player and managerial level.

It all started with the Virgil van Dijk saga last summer. I don’t think anyone at LFC was fully prepared for the way it turned out. Yet the club did not panic, stuck the plan, possibly paid more than initially planned and got the Dutch colossus, who has been magnificent. The same can be said about the way Naby Keita got to Anfield – patience was key. For me, the best example is the treatment by the club of Phil Coutinho’s “back injury”. The club knew it had all the leverage and used it in the best way possible. The last display of calmness regarding transfers was the cancelled Fekir Friday. Obviously, we are yet to see how that one will turn out but the handling of that situations continues the trend of making decisions based on long-term thinking rather than panicking as has happened quite often in the past (see Balotelli, Mario).

And then there is Jurgen Klopp. All you need to know about the man is in this video taken after the heartbreak in Kiev:

He is in Liverpool for a reason and the way the Final went is just a small hiccup on the way. There is no time to sulk. And while that’s what the supporters were still doing, Fabinho was announced. The way the Brazilian has been integrated into the squad is not something new – we saw it with Robertson and Ox last season. While frustrating for a lot of Reds, slowly working a player into the system is more likely to produce good results, as the system is to an extent more important than the individuals executing it once a certain minimum level of player quality is met.

Calmness on the pitch

Klopp has finally managed to install a sense of calmness in the players. The days of outright panic with every set piece at the end of the match are becoming rarer and will hopefully soon be just a distant memory. The days of the Reds’ defence collapsing following an opposition goal after an individual defensive error will follow suit. We allowed a single shot with 0.01 xG following Allison’s brain fart against Leicester. In the previous scrappy victory against Brighton, LFC only allowed one shot after the 75th minute, granted it was a good one. You can see our defenders calmly boot the ball away for a corner. The fans are still scarred from years of emotional letdowns and collapse at the end of matches but the players look like they have moved past that. Even with the small sample size, the Reds’ numbers in the dying minutes of games are impressive compared to the past: 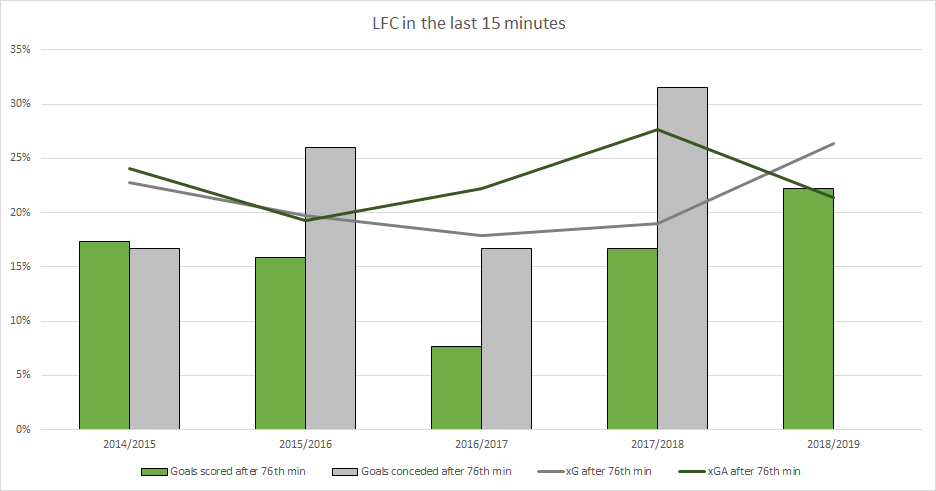 For years the Reds have been conceding at a higher rate than we manage to score in the last 15 minutes of games. In fact, the goal difference after the 76th minute in the last five season is 41 to 40 per understat (own goals are excluded as they don’t count as shots). The graph clearly shows that Liverpool consistently fail to perform at our usual level in the dying minutes of matches. This season things are looking incredibly good so far. The sample size is extremely small and we haven’t faced any of the direct rivals, the numbers still confirm what our eyes see – Liverpool is much better at closing out games. That is a mark of a possible champion – Fergie time was a term of reason, how many times did Man City score, late winners, last season?

The team had the best start of any LFC team since Sir Kenny Dalglish resigned back 1990 – I was even one year old at the time. The break comes at a perfect time – we are on top of the league but have a lot of room for improvement, so it’s not really breaking a great run of form. And what follows in September will show us what the Reds are really made of:

Update fixtures. Added the Champions League ties in there so you can see what comes before and after. pic.twitter.com/Vk2eX0hcPD

So far there are only reasons to be positive!