London, England – After the events on Monday night at the FIFA best awards, Luka Modric has been named the best men’s player of the year. Pipping award ceremony regular Cristiano Ronaldo, who was ironically missing from this particular iteration of the event, and Mohamed Salah to the gong after a champions league winning season and captaining his home nation Croatia to the world cup final. A truly deserving winner.

Certainly not Mo Salah (well at least not anymore). As Idris Elba, wrapped in his fabulous homage to Gareth Southgate, Introduced Giovanni Infantino, who, as customary, paused for dramatic effect before announcing the winner. Salah’s face was still, unblinking, focused on the lips of the man who would say his name and etch his name into the annals of history.

The Egyptian was gracious in defeat, as he accepted the Puskas award, a consolation prize for his rampageous return to English Football.

Isn’t that all these awards ceremonies are though? A distraction from what really matters in football, the team and not the individual. There seems to be no consistency in the metrics by which the award is measured. Individual contribution or team success. If the latter is the case, Wesley Sneijder and Frank Ribery would feel heavily aggrieved having inspired their sides to treble-winning campaigns and still not receiving the accolade.

Does it actually change anyone’s mind? The absolute minority of football enthusiasts would not disagree with the fact that the best men’s player is down to all but two names. Any other peripheral names are laughed off such has been their dominance over the sport in the last decade.

In Salah, Jurgen Klopp has found the perfect ‘superstar’. One that is as happy to help out his fullback or sticking one in the top corner. Paris St Germain’s defeat at Anfield last week was exemplary of this fact as their main man in attack, Neymar, showed little to no interest in tracking Trent Alexander Arnold.

Although Neymar did not even so much as a mention at the award ceremony, players of his ilk are the type who receive these awards. Modric’s success can almost be seen as a lifetime achievement award for the underappreciated, Xavi, Iniesta, Paul Scholes, stating on social media “Dedicated to everyone who loves football”.

Eden Hazard has produced the brand of scintillating performances we knew he was truly capable off at the beginning of the new campaign. Seldom does he receive any mention in the best conversation, making his debut in the FIFPRO world eleven for the first time. The Belgian captain has said on many occasions that he does not receive recognition because he is selfless. So is Mo Salah. 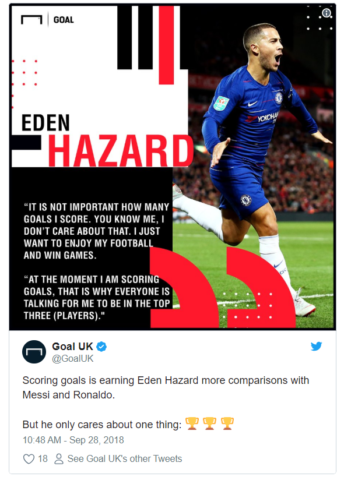 The Egyptian should not base the success of his career on the individual awards he receives (or doesn’t), rather the trophies he can inspire his team towards. Jurgen Klopp has been reinforcing this fact since his arrival almost three years ago, showcased in his approach to the game on the pitch: everyone defends and everyone attacks, no one individual is responsible success or failure of the team.

A lot has been made of Tottenham not winning a trophy for more than a decade, would any spurs fan use Harrys Kane’s three golden boots as any measure of success? Or any England fans, with his equivalent award from the world cup.

Football is a team sport and though it may be nice to receive recognition from your peers, the success of many is always more joyous than anything won alone.