MANCHESTER, England: The walls were closing in on Jose Mourinho’s tenure at Manchester United as a hugely unfancied Newcastle side, managed by (one of) the Portuguese’s biggest rivals visited Old Trafford, to try and seal the 3-time Premier League champion (as he is constantly reminding us) managers fate.

The history of bad blood between the pair dates back 14 years when Jose was in the Blue of Chelsea and Rafa in the Red of Liverpool. A time when defensive football was king and clashes between the two juggernauts usually resulted in turgid affairs where a single goal could decide the match, typified by Luis Garcia’s ‘ghost goal’ in the 2005 Champions League Semi-final at Anfield.

It is somewhat ironic that on the same weekend that two of the most defensive managers of the 21st century met once again, two managers lauded for their attacking prowess would pay homage to the dour defensive displays of more than a decade ago.

Whilst Manchester United would concede 2 goals in the first 10 minutes to a Newcastle side that had only scored 4 goals in its previous 7 matches, later going on to win the game with a 90th minute Alexis Sanchez header, Liverpool and Manchester City were playing out a tactical battle which neither wanted to lose, even though both were trying to win.

With his instructions to Benjamin Mendy and Kyle Walker, City’s flying fullbacks, to restrain themselves in attack, along with the use of Bernardo Silva as an extra holding midfield player next to the excellent Fernandinho, Pep Guardiola showed the utmost respect to Jurgen Klopp and his sides ability to punish teams in transition stating in his post-match press conference that “if its an open game in Anfield, an open game against Liverpool, you don’t have not even one chance, not even one percent [to win the game].”

Possibly only enjoyable for football purists, the match billed as the game of the season was anything but with the first half matching an unthinkable statistic for two sides possessing such attacking prowess. 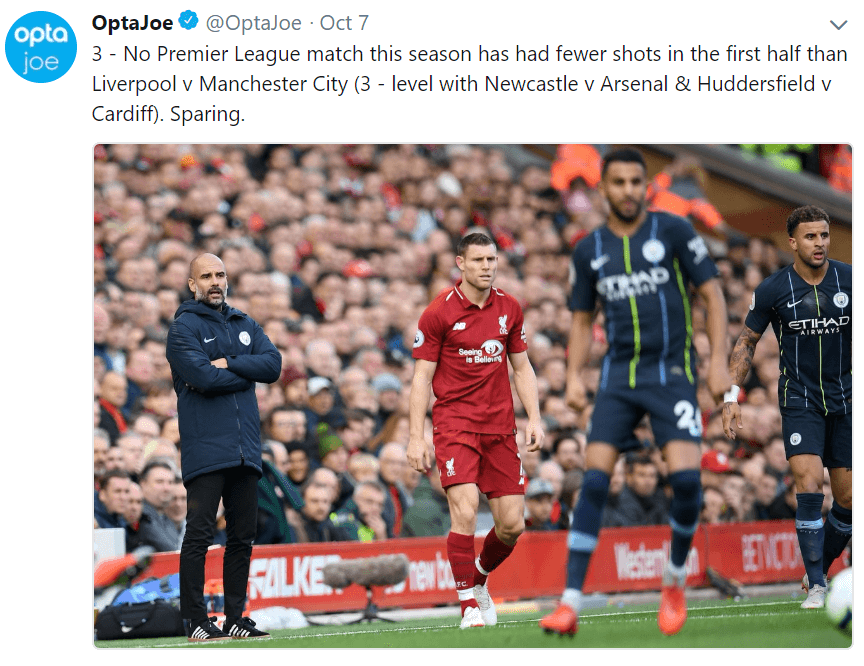 Klopp’s decision to play Joe Gomez in place of Trent Alexander Arnold, who has started every premier league game at right-back this season, was also reactionary, an attempt to shackle Raheem Sterling. A tactic which worked as the former Liverpool man struggled yet again on his return to his former home. His record now stands at a solitary assist against the Reds in 8 matches.

All of the plaudits were given to the defenders on both sides, with Aymeric Laporte and John Stones showing what City’s back line will look like for the next decade. Liverpool’s pseudo back three were almost all flawless apart from one significant mistake from each of them.

Gomez fluffing a clearance back in to his own box which led to Dejan Lovren nudging Sergio Aguero to cause shouts for a penalty and Virgil Van Dijks uncharacteristically rash challenge on Leroy Sane which would be given as a late spot-kick, only for Riyadh Mahrez to blaze the ball over the bar and into the Anfield Road end.

Liverpool’s front three have now failed to score for 4 matches in a row. This is completely understandable considering the heavy fixture list where 7 matches were played in 21 days against top quality opposition, who endeavoured to deny the space with which Klopp’s men thrive.

The squad would benefit from some well-deserved rest with 5 of the starting 11 in line to play in the upcoming nations league fixtures. One can understand the Germans frustration with the competition as it does not allow for his players to recover, labelling the tournament “the most senseless competition in the world of football.”

Lack of attacking fluidity is nothing new, an issue at the beginning of last season as well, drawing attention to the fragility at the back with Klopp being urged to sign a defender in the summer. His patience has been vindicated with the arrival of Van Dijk and Gomez’s evolution, sparing the blushes of the thus far goal-shy attack.

This game followed the philosophy of Sir Alex Ferguson “Attack wins you games, defence wins you titles”. Both teams with ambitions of winning the league this season understand the value of the point. For City it may seem like two points lost with the late penalty miss, however, if you asked Guardiola if he’d take the draw the beginning of the game, he would have bitten your hand off.

In modern football, goals are the currency in entertainment and a lack thereof can be seen as stagnation. Manchester City was able to achieve almost perfect football last season combining entertainment and results. Whilst this was mostly down to their excellence, it was also due to the incompetence of the chasing pack.

Perhaps Jose and Rafa were right all along? This is what the best teams playing each other should look like. Let’s not forget that their teams won the Premier League and Champions League respectively during the era of the boring defensive displays. Come May, if the title race is tight, we will look back on this as a point well earned.