Liverpool welcomed back three players to full training this week to give manager Jurgen Klopp some much-needed options as The Reds prepare to meet Bournemouth at Anfield this weekend.

The return of Wijnaldum and Henderson gives Klopp far greater options in the central third of the pitch and also means Liverpool’s bench will be of a superior quality than it was for the 1-1 draw at West Ham last Monday.

Klopp will have the choice of playing the 4-2-3-1 formation rather than the usual 4-3-3. Naby Keita could be deployed on the left of the line of three behind Mohamed Salah. Roberto Firmino could drop to the ’10’ role with Sadio Mané switching sides and heading to the right.

Wijnaldum and Fabinho would be a solid two-man base to the midfield which would provide much-needed protection for the recently shaky defence.

Joe Gomez is still out injured for now so the double-pivot in midfield would be the best option to help Joel Matip out.

With Wijnaldum’s energy and Fabinho’s line-breaking passes, there should be easy transitions from the Liverpool defensive third to the attacking quartet of Keita, Firmino, Mané and Salah. Also, Keita is more of an energiser bunny than anyone else in the attacking third so, even though he is slightly out of position, he can remedy that by making himself an extra option in midfield – dropping back deeper than the other forwards, especially when Liverpool are out of possession. 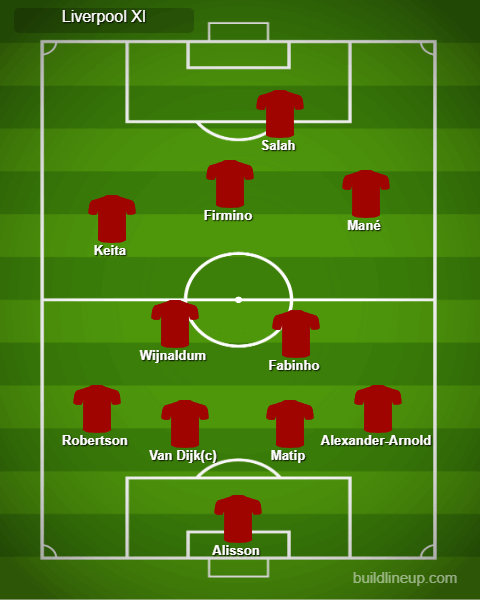 For the most in-depth tactical and statistical analysis regarding Liverpool FC sign up now! The original home of Pressing Stats, Anfield Index also brings you the latest views from club legends such as Jan Molby.