Liverpool’s number 7, Milner, arrived on a free transfer from Manchester City in the summer of 2015, just months before Klopp took over from the outgoing Brendan Rodgers.

In the four years since, Milner has been a model professional at the club, setting an example for everyone else to follow, as well as providing a wealth of experience and composure on the pitch when necessary.

Now 33, fans are wondering just how long the midfielder has left ahead of him. However, images from Liverpool’s training sessions since their return to Melwood and again in the USA show Milner has kept himself in tip-top shape as the years creep up on him. 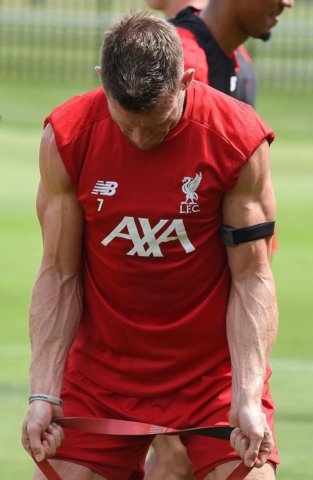 It’s easy to see why Klopp thinks so highly of Milner and values his presence around such an otherwise young squad.

When speaking to Liverpoolfc.com in the USA, Klopp was asked if he has worked with many players like Milner in the past. Klopp said:

“There have not been many.

“I was blessed to have a few players like this; Sebastian Kehl, for example, at Dortmund was a more experienced player in a very young team and was a leader in that team, like Millie is. And I think Millie improved his football a lot in the last two or three years as well.”

Klopp also highlighted that it’s not only Milner’s fitness levels that inspire the other players. He’s adept at some team talks too.

“His attitude is outstanding. Millie is a sports guy, in each sport, he is doing he is brilliant. Without Millie, it wouldn’t have been possible. His kind of a little bit dirty dressing-room talks, I cannot do, these things you say in the dressing room that I am not allowed to say in public. That’s the last little kick and that’s nice.

“We have so many leaders in the team: Hendo of course, Millie, of course, Gini, Virg, all these guys, they are in a different way all leaders. They know what to do and they will know it for a new season.

“Millie looks again in the pre-season like [he’s in] in his early 20s; but he isn’t, he knows that, and we try to respect that. But he is not only in the game not really stoppable, in training it’s the same. All good.”

For the most in-depth tactical and statistical analysis regarding Liverpool FC, sign up now! The original home of Pressing Stats, Anfield Index also brings you the latest views from club legends such as Jan Molby.