I have to start the article with a disclaimer – English is not my native language and I fear my vocabulary will fail me in describing just how amazing Virgil van Dijk is. It is a task even Shakespeare might have found impossible if he had to create a sonnet about Liverpool’s number four.

The Dutchman was voted UEFA men’s player (also defender) of the 2018/19 season and PFA player of the year after leading the Reds to number six and as close as a team can get to the league title. Virgil is the first defender to win the award in its short history and is the bookies’ front runner for the Ballon d’Or.

Best in the world

How did a lad, who was playing for Southampton a year and a half ago reach the top of the football world?

We can talk about his stats but this tweet from StatsBomb sums them up pretty well:

You should be very careful when using stats to evaluate centreb-

Numbers can’t measure the impact van Dijk has on the team and the club as a whole. The main thing those 75 million quid brought to Anfield was leadership. For years we were used to seeing the Reds’ defence descending into panic as soon as even a minimal amount of pressure was put on us. Literally overnight that changed in January 2018. All of a sudden players, who we were used to seeing mentally collapse under pressure, stopped doing so. For me, the best example is the second leg of the Champions League quarter-final against Man City on the road to Kyiv. The Reds got hammered in the opening minutes of that game (got lucky with an incorrectly disallowed goal). The ability to weather such a storm was non-existent a couple of months before that – the only difference was van Dijk’s presence. The mentality giants were never going to be without him. With time his aura has become so imposing, it not only lifts the players in Red shirts but demoralises the opposition. As last season progressed more and more teams (both good and bad) just avoided attacking through van Dijk’s zone: 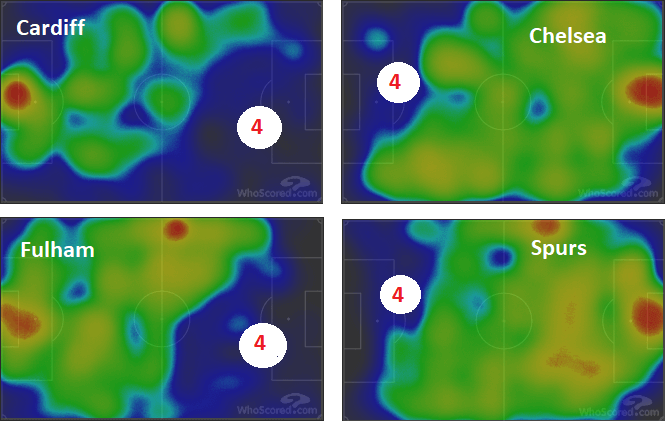 Those heat maps spell FEAR. Opposing teams know there is little reward to be won through the zone occupied by our number four. To be honest I can’t blame them. That, of course, makes it much easier for our left-back and helps so much with the offensive production we have gotten used to from Andy Robertson. Van Dijk does not need to touch the ball or make a tackle to influence the game. His presence changes the tactics of opposition managers and allows Klopp’s team the freedom to push forward with confidence in the defence. The Dutchman is one of the main reasons set-pieces have become a weapon rather the weakness they once were. This is how you distinguish a generational player – they change the game simply by being on the pitch. For a defender to do that is even more impressive.

Virgil’s impact on fans is also astonishing. The song … My daughter learned it when she was still three and we’ve had some great times singing it since then. It’s what makes the club special and van Dijk is the embodiment of that. The fact, that we had to wait for six months for him because he had a beer with Klopp in Blackpool, the fact that he said no to a guaranteed Premier League winners medal and possibly more money to come to Anfield, the way he has had to shut down doubters on his way to the top – all that is what makes him perfect for Liverpool Football Club.

The folks at AI PRO have done a fantastic special on the man as part of the Kings of Europe series, it’s worth the listen: