There will be a match report coming up on Anfield Index in the next day or so from Ravi Amin so I thought I’d take a different approach. Using Four Four Two’s impressive StatsZone app (available on the AppStore on you iPhone created by using Opta Stats) I’ve selected certain time ranges within the match to create the following images from the app.

A few things before we get started. All of of my comments in this blog are how I interpret the images from StatsZone. Obviously the main rule will be the larger the name the more influence they have had so most of this will be obvious but it’s definitely an innovative way of showing the story of the game. 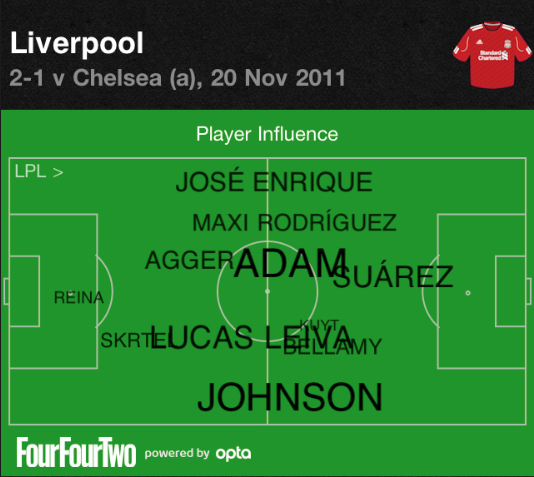 The first half was pure dominance from Liverpool FC. Chelsea couldn’t manage a shot on target and were carved open on their right hand side with increasing regularity. Especially in the middle of the half when Johnson and Bellamy had both got behind the lines and had opportunities to square balls from the right. This is highlighted above where you can see how large Johnson’s name is. You can also see from the pitch map that Charlie Adam and Lucas Leiva dominated the midfield  and this was shown by the closing down of Mikel for the opening goal, scored by Liverpool.

The pitch map above shows how far advanced Liverpool’s full backs were. Johnson and Enrique both averaging a position around the half way point. Even Daniel Agger’s position was much higher than that of Skrtel’s.

Out of the Liverpool side it was Reina, Skrtel and Kuyt that seemed less influential in the half. Agger & Enrique were kept quite busy on the left hand-side and there were a few times where Enrique defended well and where Agger brought the ball away or cleared the lines well. 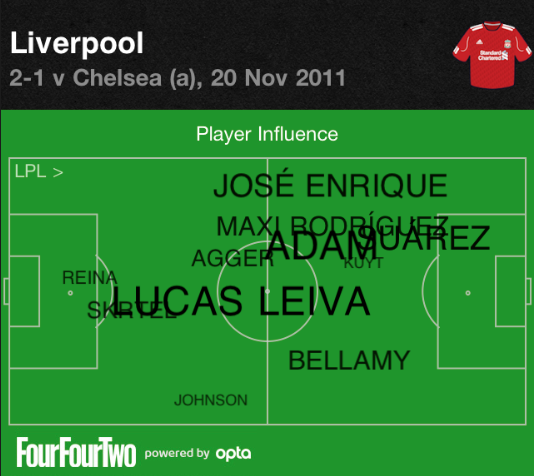 Maxi made some excellent runs, ahead of lone striker Luis Suarez, and found plenty of space. Unfortunately he was not found by Suarez or his team mates often enough and the one time he was found, he scored. An example of Maxi’s positioning is the game at the Cottage last season. Again he started on the left in that game and was found in the right place at the right time for his first two goals. His third was a superb long range effort. His importance is underplayed and as fellow writer Simon Furnivall explained in his article earlier this month, we all feel Maxi is indeed the unluckiest man in Liverpool with his lack of game time.

In the second pitch map you can see how instrumental Lucas Leiva & Charlie Adam were for Liverpool FC in the last 17 minutes of the first half. Liverpool were totally on top and pinning Chelsea in their own half as indicated by how far the team is playing up the pitch. Interestingly Glen Johnson was not as effective as he was earlier on but Jose Enrique was now trying to overlap Maxi and Suarez at every opportunity as Luis, as shown above, was positioned a lot more to the left side of the box with Bellamy more right sided. This is the period in which Bellamy was causing havoc against the blues.

Suarez and Bellamy also featured prominently in the first half with Suarez doing a bulk of the running upfront and linking with players very well. The final ball was lacking as were attempts at goal but apart from that his positional play and running off the ball was superb. 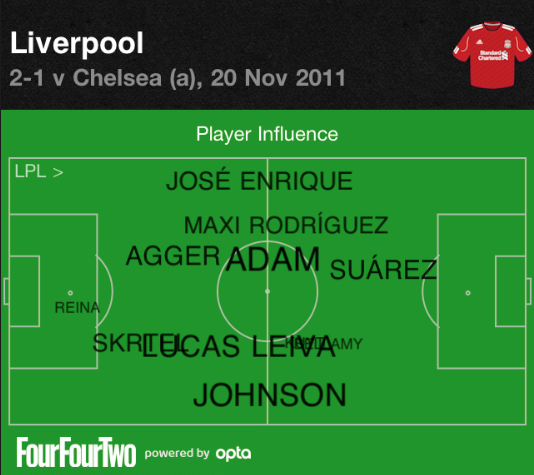 The overall first half pitch map shows exactly how dominant Liverpool were. Most of the players seem to have influenced the game from their respective positions indicating an almost perfect first half. The fullbacks overlapping Bellamy and Maxi to add width whilst the wingers playing were still very effective in linking up the play without providing “chalk on the boots” type of width. 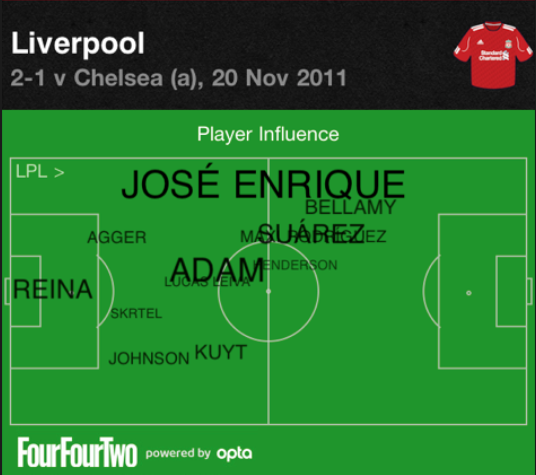 As the old cliche goes; “it’s a game of two halves” and Chelsea made a change that really turned the games on its head. Sturridge for Mikel was a masterstroke not only because Sturridge scored but because of the space Juan Mata was able to command in the centre of the pitch. Immediately in the second half you can see how far back the side is.

Jose Enrique was kept busy winning some timely challenges against Mata when he was through as well as shielding the ball out of play. You can see that Johnson and Kuyt were being pushed back in this period of the game as Ashley Cole & Malouda really piled on the pressure; resulting in the equaliser. It was in this phase that Pepe Reina made one fabulous stop and had to hold onto a few long range efforts. Three shots came in this period including the goal so you can see why Reina was influential in the pitch map above. Charlie Adam was much more influential than Lucas in this phase as Lucas conceded a few free kicks. 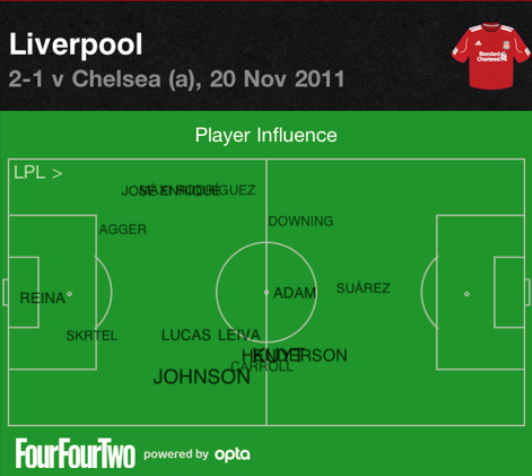 As indicated above Liverpool were not as influential in the latter stages of the second half (apart from the goal). Henderson and Johnson seemingly being the two that seemed to influence the game. Maxi Rodriguez spent most of his time supporting Jose Enrique at left back and Luis Suarez was the lone man in every sense this half. David Luiz seemed to get in front of him at every opportunity and stifling his game.

The goal scorers name the largest in this pitch-map indicating that he was the most influential which would be correct as he scored the winner. A special mention for Henderson who was the other player in the second half that came on and made a difference. His run of beating two players on the Liverpool right showed that he has a bit of skill . 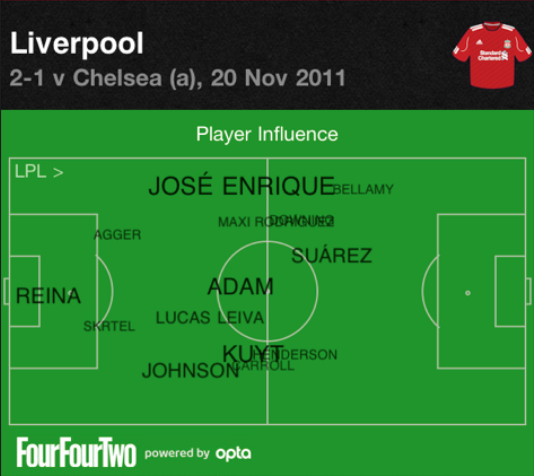 Looking at the second half pitch map I’d say that Enrique and Reina were the two most influential as they kept the game to 1-1 whereas there were chances for Chelsea to push them into a lead but Enrique and Reina stemmed the flow. As you can see Liverpool were fully on the back foot in the second half but with Agger and Skrtel really dropping deep to defend or clear the ball. 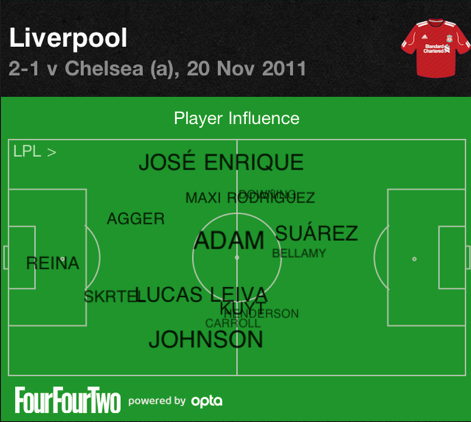 The full game Player Influence pitch map is show above and it shows that the most influential players against Chelsea were Glen Johnson, Lucas Leiva, Charlie Adam, Jose Enrique and Luis Suarez. So the two full backs, the central midfield and our striker were where the game was won at the Bridge.

We feel all of the influential players mentioned were done so deservedly because: