No, for the love of God, Trent Alexander-Arnold is not as good as Kevin de Bruyne. Just examine the radar below, courtesy of understat.com, for evidence of that. Kevin de Bruyne, under Pep Guardiola, is a phenomenon, involved in everything Manchester City do on a football pitch. Without him, as evidenced by the performance against Wolves, they lose their incisors, they lack the ferocity, and they are without one of the best footballers on the planet right now. 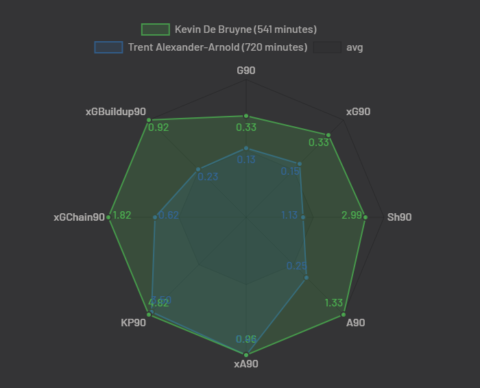 Good, now that’s out of the way, try examining the radar again. Trent Alexander-Arnold reaches the Belgian’s atmospheric levels in one sphere (key passes) and is one of the few to get remotely close to him in another (expected assists).

It’s those reasons that suggest Liverpool’s own creative incisor doesn’t come from midfield, but from the deep flank.

Klopp’s tactical setup is notorious for its layers: the midfield is not for creating, necessarily, but for counter-pressing (which Klopp maintains is the greatest playmaker) and the ability to build the play under pressure. Liverpool’s defence steps through the midfield to assert numerical dominance and find the gap for the key pass, as Joel Matip and Virgil van Dijk are prone to do. Liverpool’s front men then work in tandem, engaging in lots of one-touch passes and interpolating of positions, to essentially create chaos both on the counterattack and while facing a team backed into their own box.

Yet it is at fullback where Klopp has most innovated this Liverpool team. After all, Liverpool’s fullbacks are unquestionably the greatest pair in the world right now – it was their importance, and their ingenuity, that guided Liverpool to a Champions League final, and it was their peculiarity that saw Liverpool continually confound so many Premier League teams on the path to a 97-point season.

Yet, with Andrew Robertson’s patchy form this season, there has been plentiful chance to shine a light on Liverpool’s most creative player in the purest sense, and the man who, in English football’s highest echelon, is the closest thing to the masterful Kevin de Bruyne.

Kevin de Bruyne’s assist for David Silva vs. Watford: his cross comes from behind play and is at the perfect angle to get in behind the defence and in front of the keeper.

Trent Alexander-Arnold’s key chance created for Roberto Firmino vs. Leicester: a cross from behind the play, in behind the defence and in front of the keeper. The idea is the same, and the delivery is pinpoint.

The comparisons are easy to make when one simply gazes lazily at the chances they create, but it’s their roles which deserve the discussion, and their importance to their respective teams.

Trent Alexander-Arnold delivered 12 assists last season, one more than Andy Robertson and the most of any fullback in Premier League history, beating out Leighton Baines and Andy Hinchcliffe, and yet Trent and Robertson’s roles have differed vastly from those of the more old fashioned fullbacks: their crosses don’t come from overlaps reaching the byline, they come from the space where a creative winger would usually occupy.

It’s where the comparisons to de Bruyne start springing to life again: Klopp positions his team so that the front three, lethal as they are, always have an outlet for a one-two. It’s part of the reason they’re so fluid (the other is Roberto Firmino’s genius use of space) yet they can only be so fluid because they know if they can’t find a way through, there are two fullbacks ready to both stop an opposition counter from seeping out wide, and deliver a ball into the box as soon as they reach a dangerous area.

Fabinho is often set up further back than the two fullbacks. Indeed, when the Brazilian can’t get to a runner trying to get in behind, it’s often Gini Wijnaldum or Jordan Henderson who’ve had to cover the space left by Klopp’s oppressive fullbacks.

That is the downside – defenders continually want to get in behind him – but the upside to the young Englishman’s positioning is stark. When receiving the ball in the space from the tip of the box to the edge of the pitch, Trent is capable of putting devastating crosses. The kind Manchester City’s Belgian has wickedly weaponised. 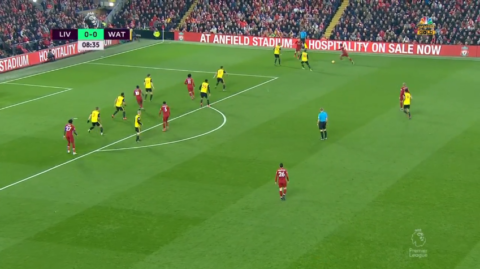 Trent Alexander-Arnold’s assist for Sadio Mane at Anfield against Watford: he receives the ball from James Milner and instantly puts a dangerous cross to the point behind Watford’s back line.

StatsZone have an “influence” tab – that is, the influence of a certain player on a team’s pattern of play. Trent Alexander-Arnold has been in Liverpool’s top three “influencers” in all but one Premier League game (Newcastle), meaning Klopp wants his play to go through the fullback. It’s quite something for a teenager to be tasked with being a prime creative outlet, though Trent will take some solace in the fact that his opposite number, Andy Robertson, has been in the top three “influencers” in all of the same games. 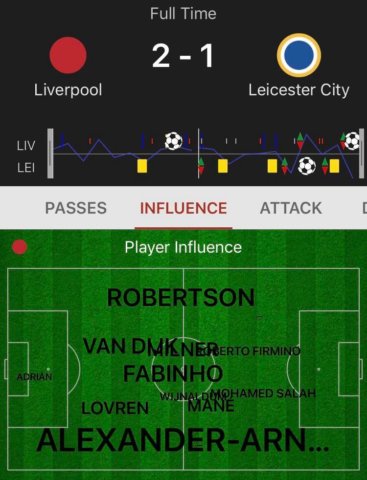 It’s simple, Klopp believes that, aside from his front three, his fullbacks are his creative weapons, able to deliver balls into the defence not from the usual spots, but from those positions which, when angled right, cause havoc.

The proof is in the image at the top of the article: Kevin de Bruyne’s expected assists metric has essentially broken the system; nobody can touch his 0.96 expected assists per 90, and yet Trent Alexander-Arnold, in a role that was never associated with creativity, is the second closest player to the Belgian’s expected assists tally (the closest being City’s Riyad Mahrez.)

In Liverpool’s system, there is a mesmerising front three, an industrious midfield, and the world’s best centre half. But there, pulling all the strings, is a right-full back capable of weaving some magic.