“It’s like a free shot tomorrow because we have to deliver in the following 11 games.”

The comments of Norwich City manager, Daniel Farke, epitomised what lies ahead for Liverpool FC. No team expects to beat Liverpool, but every single team craves to be the one that finally fells the mighty red behemoth. Liverpool, on a seemingly unstoppable charge towards an unprecedented flawless season. Nonetheless, amidst ghastly conditions, brought about by the menacingly destructive Storm Dennis, Liverpool travelled to Norwich and saw off the Premier League’s bottom side. Whilst the match was ultimately one which Liverpool deserved to win, it was not without tactical problems and stories that made it a thoroughly watchable and enjoyable tactical encounter, despite the point disparity between the two sides presumptively indicating this would be a foregone conclusion.

Norwich set up in a 4-4-1-1, which saw Duda occasionally break from the midfield line to support Pukki, but given Liverpool dominated the ball, for the majority of the time, Norwich were in a 4-5-1 mid to low-block, with the express intention of blocking the central areas, and forcing Liverpool out wide.

Liverpool, however, set up a little different to their usual system. Instead of playing with a single deep midfielder, the “no.6”, Liverpool used a double pivot. For the first twenty five minutes, Wijnaldum and Henderson sat alongside one another, creating a box with them and the two Liverpool centrebacks. Ahead of the double pivot was Naby Keïta. However, he swapped with Wijnaldum after the opening twenty five minutes, moving to a deeper position, alongside Henderson, whilst Wijnaldum moved up to support the forward line.

Liverpool’s opening period appeared sharp, but not particularly conducive to creating high-quality chances. Liverpool may have taken their first shot within thirteen seconds, but it was from outside the box, a theme that persisted over the first half. One of Liverpool’s greatest strengths is the variety of approaches the side can deploy to deal with a particular challenge. In this game, the challenge was breaking through or past a compact low-block which made playing through the middle of the box difficult. Roberto Firmino, instead of getting caught in the middle of a Norwich huddle, dropped deeper, whilst Salah stayed wide where possible, outside of the Norwich rightback, where he incessantly made runs both inside and outside of the player. Liverpool initially attempted to use Salah frequently through short passes in to him

Despite taking a shot after a mere thirteen seconds, and intending to press high, Liverpool’s tactical variety and shape was causing some problems for themselves. Liverpool can be both one of the most direct and the most indirect teams in the league across a whole game, and we saw both aspects of that during this fixture. After the first twenty minutes, Liverpool struggled to generate clear goal scoring opportunities and establish a fluidity to their ball progression. Central to this were a few issues:

Liverpool’s spacing, between each player and between Norwich’s lines was too far apart. The team was too compact when building up from deep, with Robertson and Alexander-Arnold forming a back five when Liverpool had the ball in their own half, with the two centre midfielders ahead of them in the double pivot spread too far apart from the forward line. This spacing stopped Liverpool from establishing control of the game and control of space in the final third. Liverpool’s centrebacks responded to this by playing long passes over the top, which only exacerbated the problem, as Liverpool’s midfielders and defenders were not high enough to compact the space, press and contest second balls, resulting from the initial long ball. Consequently, the Liverpool press and the intensity of the press fell away, although, as a result, Norwich then stepped up, moved into the space vacated and opened up the game.

This granted Liverpool more opportunities to attack space and move at speed through Norwich when catching them in offensive-defensive transition. In the 38th minute, Salah fired away a shot from inside the box, a much-needed break from the series of efforts that were taken from outside the area, and which are both easier to defend and save.

At half-time, Klopp adjusted Liverpool’s setup and moved both Alexander-Arnold and Robertson further up the field, where they could support both the midfield and forwards, acting on the midfielder, forward or halfspace line, i.e. wherever the gaps were between the Liverpool players. This movement allowed Liverpool to now hold the ball more consistently inside the opposition half, where the team could now circulate the ball, probe the spaces, and increase the scrutiny and intensity placed upon the Norwich defence.

Supplementing this was a double change made in the 60th minute. The introduction of Fabinho and Mané amped up Liverpool’s intensity, quality and control of the game significantly. Fabinho moved into the no.6 role, thereby allowing Henderson and Keïta to function as the no.8s in the left and right half-spaces where they could support the forward line more effectively. Mané posed a more direct, explosive and dynamic threat to Oxlade-Chamberlain, breaking in behind more often, and drifting inside and outside, whilst Salah took up a central position.

The new Liverpool shape established total superiority in midfield, where Liverpool were now far better positioned to press and counterpress when losing the ball, and also to stifle Norwich’s counterattacking opportunities.

As the two images below display, Liverpool were able to move up the field and exert control over the game through positioning their forwards against the Norwich back line, but they were importantly able to access them because of how the rest of the team pushed up and created short passing options into the forwards. 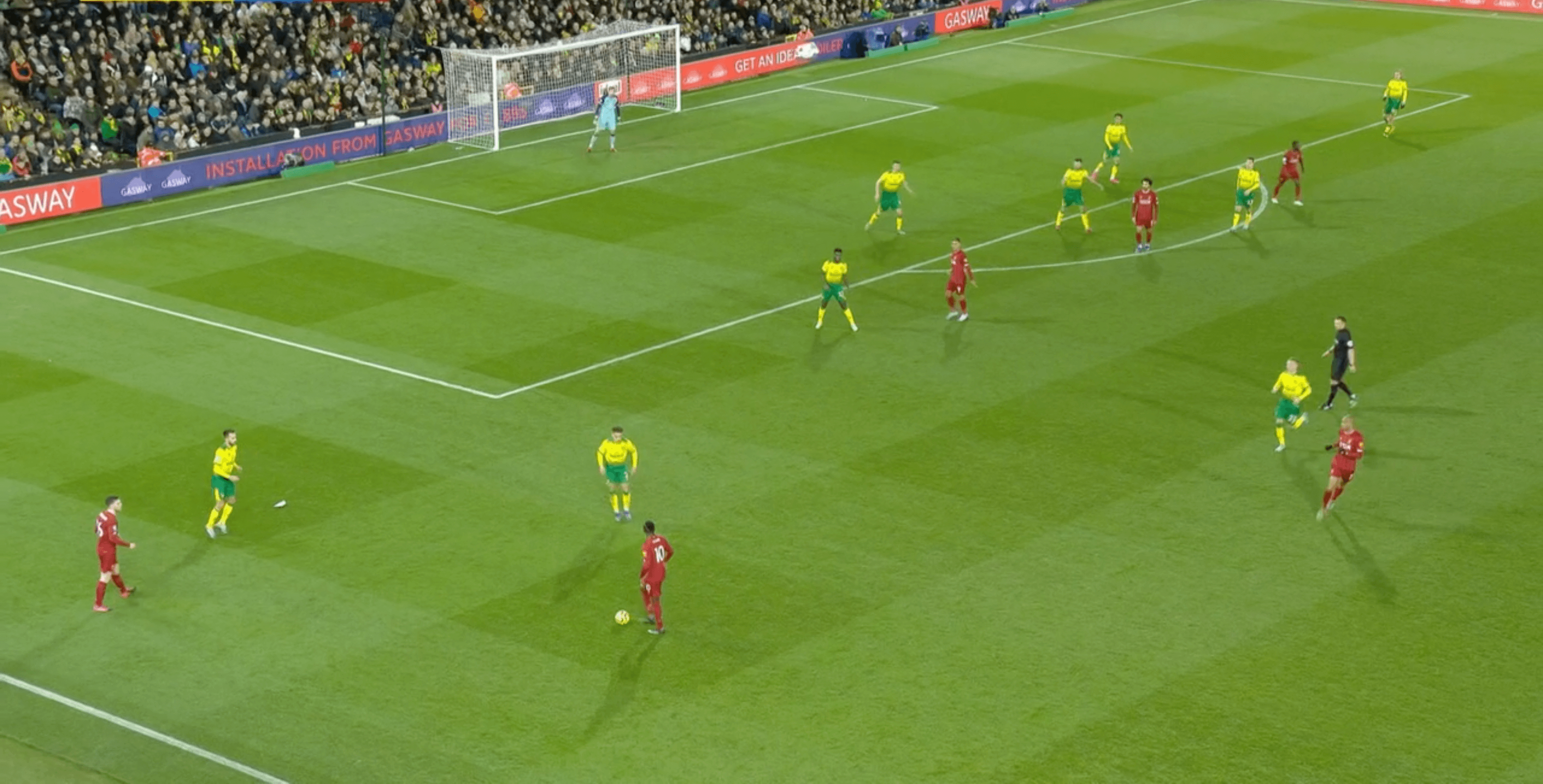 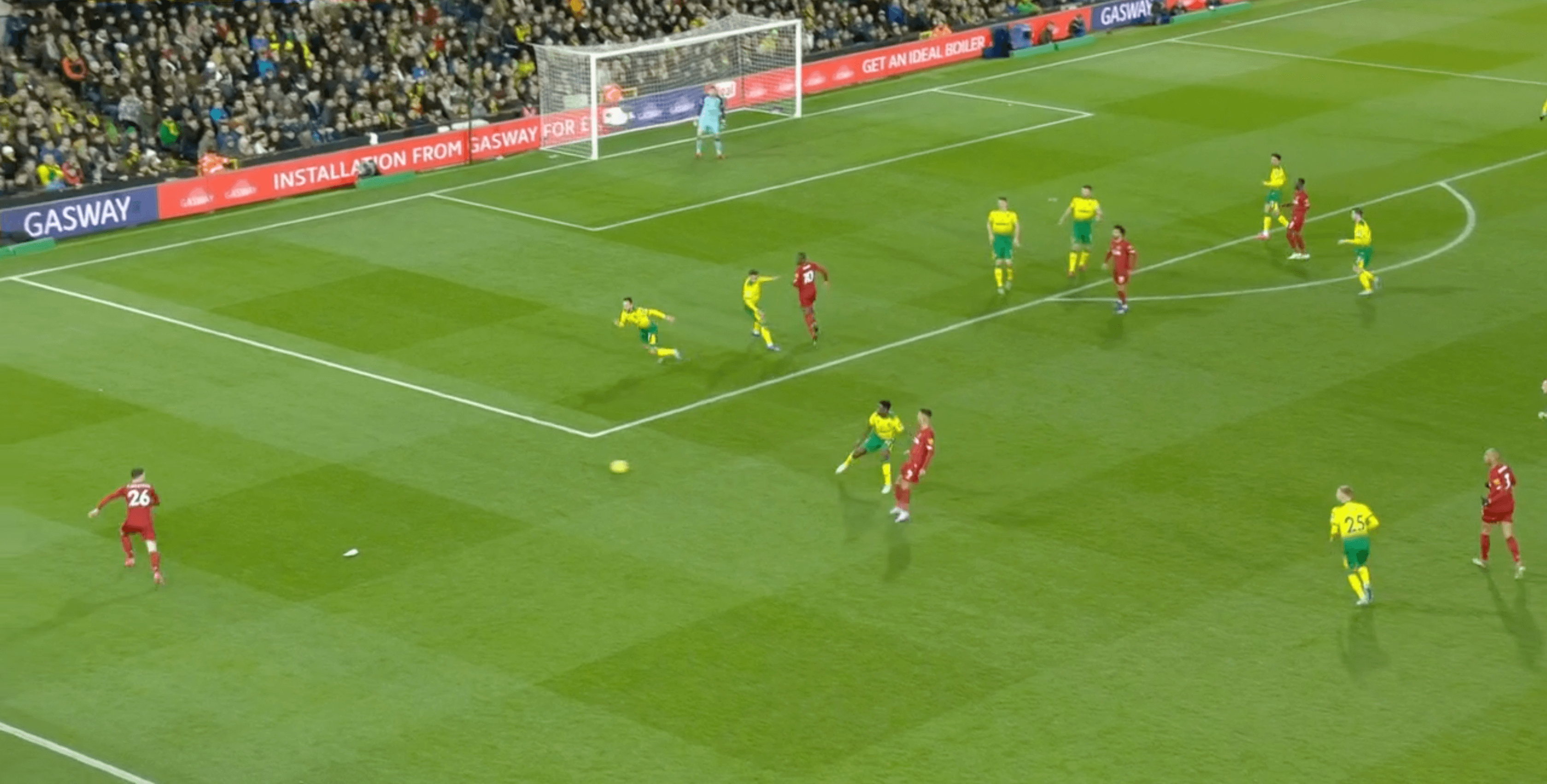 As Liverpool increasingly won the ball further up the field, the pressure was beginning to tell. Not only were Liverpool looking to use width to stretch Norwich in order to break past and inside their defensive shape, at the same time, Liverpool were looking to bulldoze through the centre of Norwich’s defence with direct passes in behind.

Despite the wind blowing against Liverpool’s direction of attack, the direction of the game was clear. Liverpool’s pressure and advanced positions pegged Norwich back deep, so that when Tim Krul cleared his lines (below), and Joe Gomez passed forward into Henderson, he was in space, under no immediate pressure, and with the opportunity to look forward, pick his head up, and clip a pass into Sadio Mané, whose touch was sublime, and his finish unerringly emphatic. 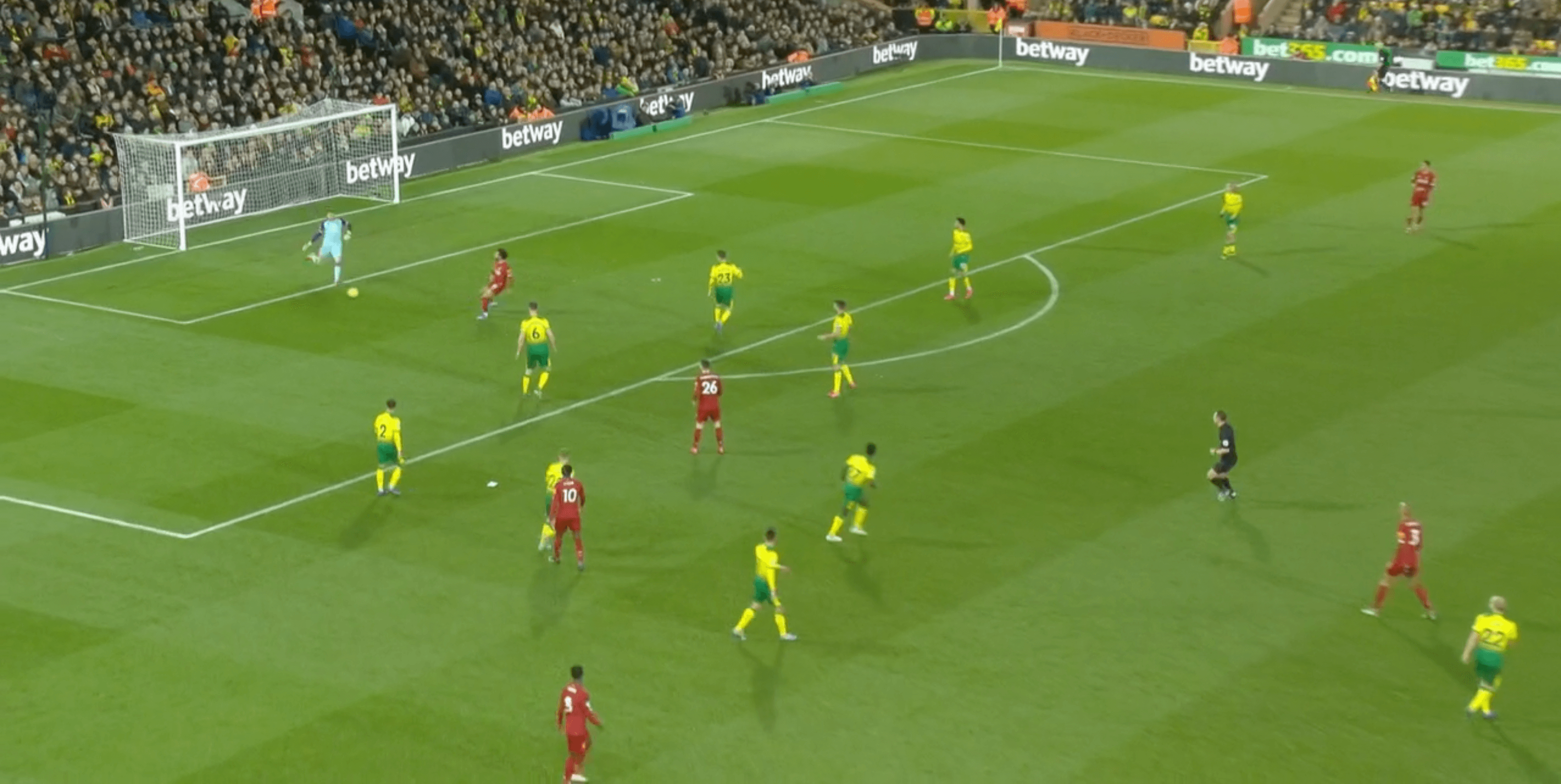 Like Liverpool’s goals against Bournemouth and Everton, Norwich were undone by not applying ball pressure to Liverpool’s deep players, as a consequence of being pushed back deep into their own halves. 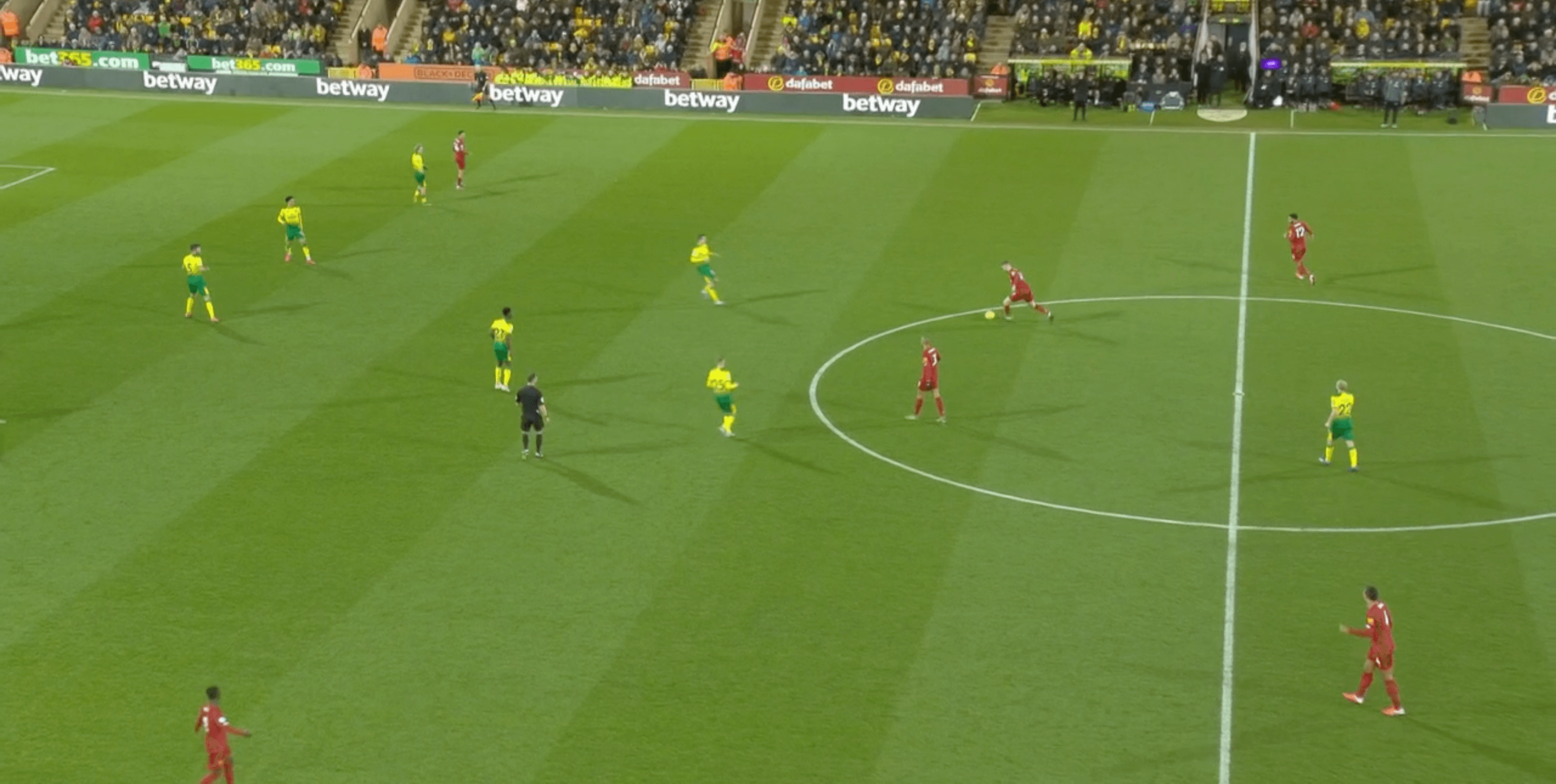 Mané’s goal proved the decider, but Liverpool had two other significant chances fall to Firmino and Keïta during the game that could well have changed the scoreline to better reflect the performance. Nonetheless, Norwich’s spirited effort and Liverpool’s own mistakes in the first-half made this an extremely enjoyable watch as it displayed the problem-solving skills of the management and the players in action as they readjusted their patterns of play to suit the conditions and tactical challenges they faced. It’s this resilience, adaptability and perseverance that has made this Liverpool side the best that anyone has ever seen, and whilst this was by no means a vintage performance, it was another consecutive win, another step displaying the unwavering commitment of the side to excellence and the uncompromising pursuit of perfection that has made every single game unmissable.