Atletico Madrid’s 1-0 victory at the Wanda Metropolitano heralded the end of Liverpool’s phenomenal winning streak. The performance itself was more concerning than the defeat though, with Liverpool merely creating eight chances (four of which were shots from outside of the box), one Big Chance, but not managing to get a single one of those on target. Liverpool’s 0.6 xG was one of the lowest generated in recent memory. The Atletico Madrid defensive shape was immovable and robust but rarely put under sustained scrutiny by Liverpool, who struggled to establish a settled in-possession shape in the final third, with the front three isolated. The positive to take from this though is that Liverpool played well below what we know if their capacity, and because of this expecting a turnaround at Anfield is reasonable, with analytics websites such as 538 still tending towards Liverpool progressing, as 51% favourites.

As the first leg illustrated, this is first and foremost a tactical contest, which revolves around Liverpool being challenged to break down or break through the Atletico Madrid low block, and managing the counterattack too.

The key to playing against a low block is maximsing the pitch size, and generating spaces between defenders. In order to do this, Liverpool’s forward line will need to be positioned up against the Atletico Madrid defensive line; to increase the spaces between defenders, the forward line will need to be as wide as possible, meaning Salah and Mané will be positioned outside the fullbacks. The risk here is that three of Liverpool’s best players, Salah, Mané and Firmino may well be isolated behind Atletico’s midfield line, furthermore, when they receive the ball Atletico’s fullbacks and wide players will double up on them.

Hence, the midfield, and how it functions, will be crucial to the result of this match. Liverpool need to generate as many one-on-one opportunities between the Salah and Mané against their opposite defender as possible. To do this, Liverpool’s midfield will need to drag opposition midfielders out of position. There are a number of ways to do this:

The switch is one of the most useful tools to expose a low block, or to expose space. Liverpool’s switch is usually provided by Alexander-Arnold, whose fast, direct and accurate passes can shift play from one congested area of the pitch to a vacant area. The switch itself causes opposition defenders to change the direction they are facing immediately, which disorientates them and forces them to regain shape as they move towards the ball. This disorientation provides an opportunity for the team in possession to attack spaces and attack opposition players in one-on-ones.

The best example of Liverpool utilising the switch to good effect is Liverpool’s goal against Manchester City, at the Etihad, last season. A sustained passing move which saw the ball move from one side of the pitch to the other thrice, with the final switch releasing Robertson who then clipped in a cross from the final fifth of the pitch.

Overloading the midfield again involves the fullbacks, but it also usually involves Roberto Firmino. Through Firmino dropping deep, and Robertson and Alexander-Arnold moving into advanced wide positions, Liverpool can create a numerical superiority. Key to this is the way in which Liverpool uses the numerical advantage. There is no value to having six players in the central third, if four of those are positioned in front of the Atletico midfield line. These players need to be staggered, one ideally in the no.6 position, the fullbacks in high and wide positions, and each of the no.8s in the left and right half space, but at different vertical lengths on the pitch, to create as many lines and pockets of space as possible.

In possession, against Atletico in their low-block, Liverpool should look somewhat like this: 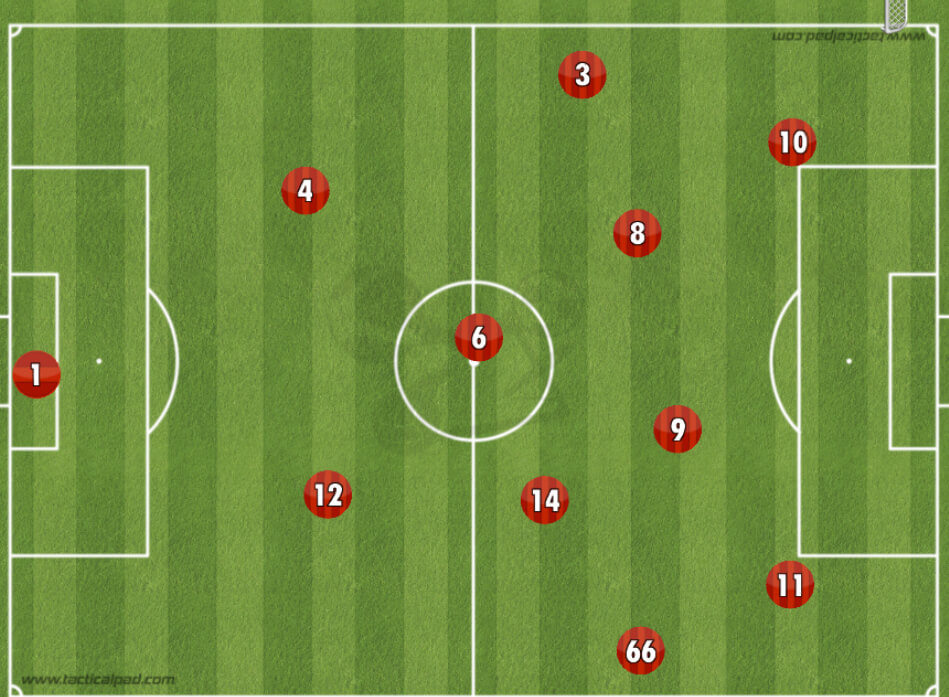 Carrying the ball from deep positions

Having players that can carry the ball in a progressive and aggressive manner is essential to breaking down a low block. In the same way in which having a winger standing on the touchline can drag their opposite fullback towards them, and thereby create space between the fullback and the centre back, having a ball carrier in midfield can do the same. This ball carrier can often be a centre back (Joe Gomez and Joel Matip do this very well), and the centre back can run with the ball into midfield, thereby attracting an opposition midfielder to pressure them, and break their defensive shape. Through forcing the opposition to break their offensive shape, a space opens up in the exact space the opposite player has vacated, which can either be dribbled into or passed through.

Liverpool’s two best progressive ball carriers are Naby Keïta and Oxlade-Chamberlain, if Liverpool hope to break Atletico down centrally, one of these players must play.

In the first leg, and in recent matches, Oxlade-Chamberlain, has picked the ball up in positions that are too deep and took up an in-possession position that has been too flat, with him and Wijnaldum, in particular, playing on the same horizontal line as Fabinho in Liverpool’s 3-0 loss to Watford. Keïta though has struggled to have a sustained period in the starting XI, due to a series of unfortunate injuries. Nonetheless, even with injuries periodising his appearances for Liverpool, he has retained a remarkably high-performance level when he has played, with excellent xGChain and ball progression figures. Having his ball-carrying ability from midfield may well be the difference between breaking through the Atletico midfield block and Liverpool being rebuffed from deep.

Low blocks were a significant concern for Liverpool in recent seasons, but over the last season and a half, Liverpool have found a consistent and reliable gameplan to break down low blocks, and Liverpool’s record at Anfield over the past two years is testament to this. The side has the capacity to pick apart opposition teams through intricate, short, fast-paced passing moves, which it often does in the middle third when the fullbacks link up with the midfield and then break into space, but the side also has the battering ram approach, where it blitzkriegs its way through the centre of the pitch. Against Atletico, the undisputed masters of the low-block tactic, Liverpool will need to muster all their tactical resources, and employ them patiently, without resorting to long shots, or forcing crosses from deep positions. Patience and careful probing combined with lightning-quick movement and aggression in those moments will be the means through which Liverpool can win.

Scoring first is absolutely essential. Being able to dictate the game, and encouraging Atletico into coming further up the pitch, thereby leaving more space for Liverpool to attack and exploit changes the entire dynamic of the tactics and the tie itself. Should Liverpool play well to the level they have shown over the past two seasons, Liverpool can expect to go through, but this is dependent on executing the tactics well, being patient and eliminating the small errors that cost the side in the first-leg.