Getting the right mix of grafters and crafters is vital to a team’s success. A grafter is the type of player who makes up for any failings in natural technical ability through sheer blood, guts and endeavour. Think Dirk Kuyt. On the opposite end of the scale you have crafters, players who have a very high level of technical ability but are are more tactile in their play. Jordan Henderson fits into this box.

Liverpool’s squad has many players who immediately strike you as being on one end of the scale or the other. In the graft box I would place Lucas, Kuyt, Carroll, Carragher, Flanagan, Kelly, Bellamy, Spearing and Skrtel. In the craft box I would place Maxi, Adam, Henderson, Enrique, Auerlio, Johnson, Coates, Downing and Shelvey. Then you have the players who you can’t really put in either box, since they excel in both areas: Suarez, Gerrard and Agger.

I have plotted the players dependant on how far towards one end of the scale I perceive them to be:

The higher up on the chart a player sits, the better (subjectively!) he is. The further to the left or right he sits, the more of a grafter or a crafter he is. Kuyt is on the far left, Henderson on the far right. At various positions along the top are the four truly world class players we have, the spine of our team. Lucas is the only world class player we have who is on one extremity of the scale, and the very nature of his position demands this. Like Mascherano, Gatusso and Makelele, Lucas is a world class grafter.

With this in mind, when looking for a direct replacement for Lucas you surely have to pick from the ‘graft’ box. This immediately discounts Shelvey, Adam and Henderson since the qualities these players possess are not applicable to the demands of the role.

In working this through you get to two possible solutions for how to solve the problem of filling the “Lucas role”. The first observation is that we have three players who are of high value and tick the “graft” box in central defence. We also have two players in the “craft” box who are our highest value full backs. This blend suits a 3-5-2 formation, with five from Adam, Henderson, Kuyt, Spearing, Bellamy, Maxi, Downing, Suarez, Carroll, Gerrard and Shelvey filling the other positions on the field. Who Kenny picks from that list depends on whether craft or graft is most suited to the occasion. Gerrard and Suarez are certain starters regardless of the opposition since they excel in both areas and are, at their best, world class. This system probably leaves no room for Spearing as his role will be covered off by the extra centre back. Here is how it could look whilst Gerrard is still out: 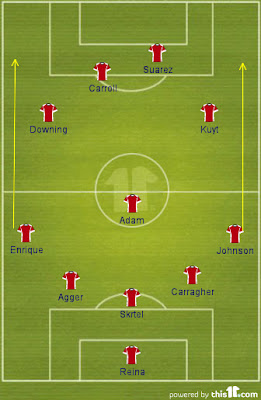 The second solution is to maintain the 4-4-2 / 4-2-3-1 formation and put in a direct replacement for Lucas. For this you need a player with high energy, good tackling ability and a cool head. Step forward Jay Spearing. He has all of these qualities in his game. The question is whether he can perform at a high enough level to be able to compensate for Lucas’s loss.

The example I will draw on to answer this question is Lucas himself. The same questions being asked of him in replacing Mascherano are now being asked of Spearing in replacing Lucas. It is a classic case of apprentice turned master. Lucas stepped up to the plate, and so can Spearing. The dream scenario is for our future academy graduates, like Conor Coady, to look up to Spearing as a master of his art. If you think this sounds fanciful, read through the fans forum posts on Lucas from 2009. Only two years ago he was a figure of widespread ridicule. Here is the familiar looking shape with Spearing replacing Lucas: 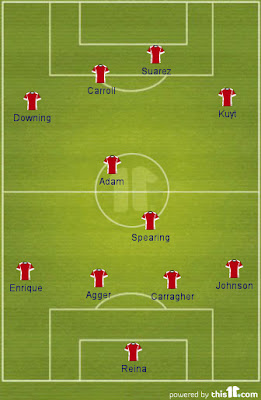 Whichever way Kenny goes, the great thing is that he has options. There is a plan B if plan A fails. Plan A for me is for Spearing to come in and make the role his own. In that scenario, at least some good will have come from Lucas’s poor fortune.