Liverpool were on pace to break the record for most points in a single Premier League campaign before football was paused. Remarkably, the Reds had won 93% of their matches in the English top-flight this term. For a bit of context, the Manchester City centurions, regarded by many to be one of the best sides ever, won 84% of their games.

It highlights just how incredible this Liverpool side is. Upgrading any area isn’t easy but with football perpetually evolving, Jurgen Klopp’s team can’t afford to standstill. A wide forward is top of the list and some full-back cover would be nice. However, according to reports in Spain, Liverpool are looking to add a centre-back to their squad.

In January, El Desmarque claimed the Premier League leaders had sent scouts to watch Sevilla centre-back Diego Carlos. The report went on to say Real Madrid were watching the Brazilian, too, while Diario Sport claimed the 27-year-old was on Barcelona’s radar.

Carlos has a £65million release clause in his contract, though the feeling in Spain is that clause won’t have to be met to convince Sevilla to part ways with him. Given Harry Maguire went for £80million and there’s talk that Dayot Upamecano could command a similar amount, the Sevilla centre-back could be something of a bargain in the current market.

Now, Liverpool are blessed with dominant centre-backs. It isn’t an area many fans would spend £50million on right now. Virgil Van Dijk is the best in the world. Joe Gomez has, at times, been his equal this season while Joel Matip was key to the Reds lifting their sixth European Cup last season. Dejan Lovren divides opinion but he’s been a lot more reliable over recent seasons. He looks set to depart at the end of the season but he was fourth-choice at best.

Liverpool need someone to rival Matip for the third-choice position, maybe even push the Gomez for a start alongside Van Dijk. Yet parting with £50million for a 27-year-old would suggest the Reds are signing a starter, not a squad option. Does it really make sense? No. But if Michael Edwards feels he ticks the boxes, who are we to argue?

Carlos has impressed for Sevilla this season. He’s winning, on average, 60% of his aerial duels. He’s a proactive defender, making 1.1 interceptions and winning 80% of his tackles per 90. He’s averaged five ball recoveries, too.

But what makes him an intriguing option is his on-ball ability. He’s attempting, on average, 51 passes on a per 90 basis and he’s completing over 80%. 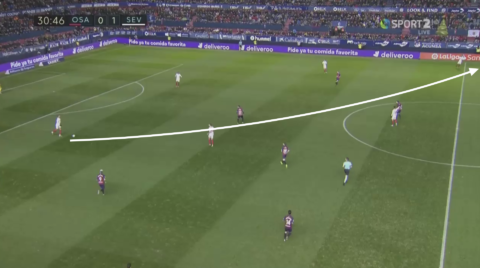 While that completion rate may not seem high compared to Van Dijk’s average of 90%, it is worth noting that Carlos plays risky passes with great regularity. An example of that is above. He picks the ball up deep and looks to switch play. He acts as a quarterback, similar in many ways to the Dutch colossus, and manages to complete 50% of his long balls. This sort of pass has been a key part of the way Liverpool build attacks this season. Adding players who already have this ability in their locker is no doubt a priority. The more playmakers there are in a team, the more chances there will be.

Carlos does profile well. But I can’t see him being a Liverpool transfer target. The Reds don’t usually sign players aged 27. There are exceptions to the rule, of course, but Carlos isn’t a game-changer. Secondly, he wouldn’t exactly be cheap. Even if Sevilla sold him for £50million that would still make him one of the Merseyside team’s most expensive signings. And the cherry on top is that he’s primarily a left-sided centre-back. He has occasionally played on the right but his favoured position is the one occupied by Van Dijk, and he isn’t displacing him any time soon. Edwards might want to add a centre-back this summer but you can almost guarantee it won’t be Carlos.