The interconnected nature of European football makes it quite a surprise that Liverpool boasts only seven Danish players in its roster of former players. A few of them never managed to reach the senior squad, but a handful at least made an impact in front of the Kop faithful; a quartet that we pay tribute to below.

It goes without saying that Jan Molby is the most popular and successful import from Denmark. The 56-year-old made 218 competitive appearances in a Reds shirt after joining from Ajax following a successful trial in the summer of 1984. The classy central midfielder was something of a set-piece specialist. One of his finest hours came in the 1986 FA Cup final against city rivals Everton, when he turned in a man-of-the-match display to play a part in all three Liverpool goals at Wembley.

After leaving Anfield, Molby spent two years with south Wales outfit Swansea City, before retiring from the professional game aged 35. Since hanging up his boots, Molby has turned his hand to other pursuits such as poker. He has entered European Poker Tour Main Events in his native Denmark, finishing 45th in 2012 for a cool $9,723 payout. His success caused a real stir with the online poker community, with the likes of PokerStars blogging his progress at Casino Copenhagen. PokerStars remains the leading online poker brand in terms of the size of its online community and its free bonuses for new sign-ups to their poker tables. At the time of writing, Molby is 574th most successful Danish poker player in the nation’s all-time money list. 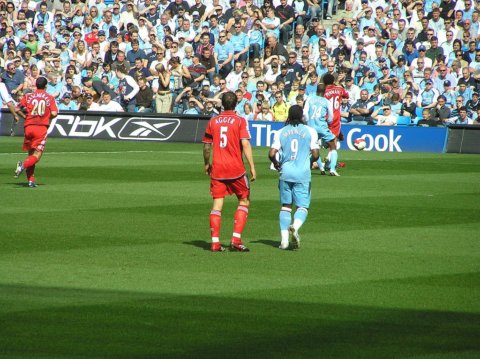 Powerful central defender, Daniel Agger stormed onto the scene for Danish outfit Brondby in 2004 and within 12 months was already attracting the attention of Champions League sides. Aged just 20, Agger was named Danish ‘talent of the year’ across all the nation’s sports. Liverpool eventually secured his services in January 2006 on a £6m deal. The transfer made him the most expensive export by a Danish football club.

Agger would go on to spend eight prolific years with the Reds, winning the League Cup and Community Shield with Liverpool. The biggest disappointment during his time on Merseyside was missing out on a Champions League winners’ medal, having been in the side that lost 2-1 in the final to AC Milan in 2007. Nevertheless, his cultured style and physical prowess in the air endeared him to the Anfield masses.

A quick glance at Christian Poulsen’s footballing CV and you’ll struggle not to raise your eyebrows and be impressed. Poulsen has enjoyed success throughout Europe wherever he has been. He’s won the Danish Superliga with FC Copenhagen, the German Cup with Schalke 04, the UEFA Cup with Sevilla and spent two seasons with Serie A giants Juventus.

Poulsen would eventually leave his €3m-a-year deal with Juve in favour of a move to Anfield under former Reds boss Roy Hodgson. The £4.5m signing seemed a sensible move at a time when more experienced heads in the middle of the park were needed. However, the departure of Hodgson and the appointment of Kenny Dalglish signalled the beginning of the end for Poulsen’s Liverpool career. Homegrown talent Jay Spearing was increasingly favoured by Dalglish and Poulsen’s days were numbered, eventually agreeing on a switch to French Ligue 1 side Evian. Interestingly, this deal would see Poulsen become only the second footballer after Florin Raducioiu to play in the five biggest leagues in Europe – the Bundesliga, La Liga, Premier League, Serie A and Ligue 1.

Defender, Torben Piechnik was a seasoned player in Danish football for 12 seasons prior to his switch to Anfield. Piechnik spent seven seasons with Kjobenhavens Boldklub, which now play in the fifth tier of Danish football. He would go on to represent his country at the 1992 European Championships, even playing in the final as deputy to the injured Henrik Andersen.

It’s possible that Piechnik’s 90 minutes in the spotlight of the European Championship final will have alerted him to scouts across the continent. He played just seven more games for FC Copenhagen before Reds boss Graeme Souness made a beeline for his services. Under Souness, Piechnik would play 16 times in the inaugural Premier League season, before being phased out in 1993-94. The departure of Souness and the subsequent arrival of Roy Evans led to Piechnik returning to his native Denmark and finishing his playing days with AGF Aarhus.