You can tell football is close to a return. Transfer rumours are slowly starting to emerge with greater regularity. The usual suspects have been on the agenda for Liverpool with Timo Werner and his release clause dominating talk. Mario Gotze and his contract situation has seen him linked with a reunion with Jurgen Klopp. But perhaps the most interesting report over recent days has been the one claiming the table toppers are interested in Lille forward Victor Osimhen.

The 21-year-old was linked with a move to Merseyside earlier on in the campaign after impressing during his debut season with Les Dogues. But the Reds aren’t the only ones showing an interest in the 6ft1ins striker. Chelsea are long-term admirers, Everton are believed to be keeping tabs on the former VfL Wolfsburg man while both Arsenal and Manchester United have been mooted as potential destinations.

The Nigeria international has 13 goals in Ligue 1. For a little more context, that is an average of 0.51 goals per 90. His numbers seem sustainable, too, with his expected goals average coming in at around the 0.49 figure per 90. He’s been responsible for near 40% of the goals scored by Lille in Ligue 1 and he’s been instrumental in their pursuit of a top-three (Champions League) finish. When football was paused, Christophe Galtier’s men were sitting in fourth place, just a point behind Rennes.

It’s no wonder teams are showing an interest in the Lille No.7. According to Le10Sport, Liverpool are already talking with the player’s representatives and the French club seem to have made peace with the fact they’ll lose Osimhen whenever the transfer window reopens.

On paper, he’s a talent. One who is probably pinging Michael Edwards’ laptop. But unlike most Liverpool targets, Osimhen is one dimensional. He’s a centre-forward and he’s at his best when deployed as a number nine. You won’t see him playing in wide areas and his heat map paints a picture of a poacher. The Reds don’t really have a need for that sort of player.

Werner, on the other hand, can play anywhere across the forward line. He can also play as a false-nine as well as a striker who plans on the shoulder of the last man. The German is perhaps the definition of a complete attacker. Going from the RB Leipzig man to the Lille star is a bit of a head-scratcher given they’re two completely different players, at least stylistically.

But then David Hughes, a writer for Reach and a friend of mine, shared the below graphic with me, and it was a bit of an eye-opener. 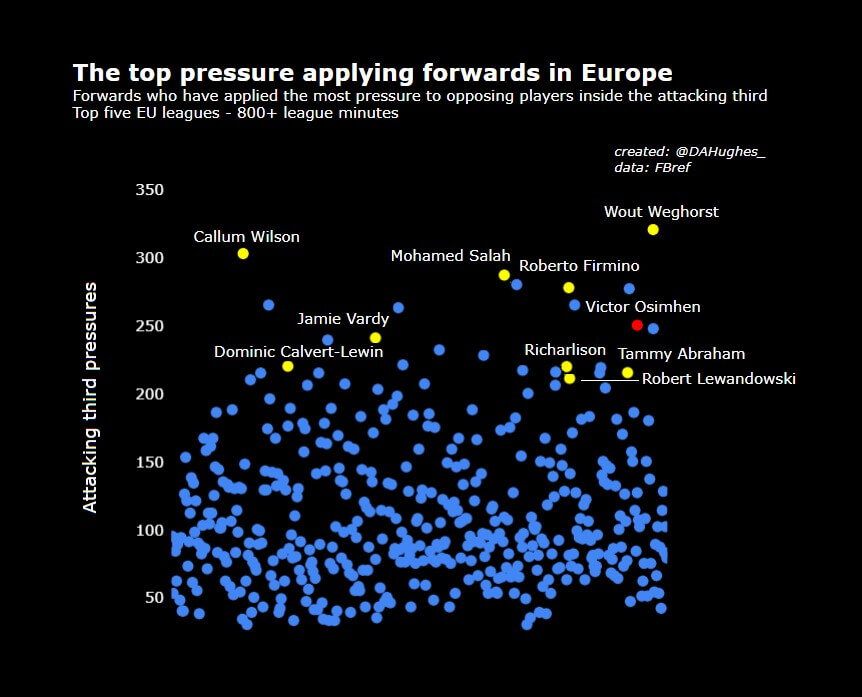 As the graphic says, it shows forwards with 800+ minutes within the top five leagues who pressure opponents inside the attacking third. As expected, Roberto Firmino and Mohamed Salah show up on the graph in positive areas. Surprisingly, however, Osimhen ranks highly too.

Lille play a counter-attacking style. They aren’t renown for their pressing nature and Osimhen, as previously mentioned, seems to come alive when in and around the penalty area. So seeing him rack up so many pressures in the final third is a pleasant surprise. It highlights that he puts in a shift defensively and he’s much more than just a selfish striker looking to add to his goal tally. It means he’s someone Klopp could work with. He’s someone the Liverpool boss can shape. He’s a striker who could be morphed into a variety of things. A potential successor to Firmino even? It’s no given but finding someone with a similar worth ethic is definitely appealing and it’s perhaps one of the reasons Osimhen might be on the club’s wishlist.