Liverpool have already felt the brunt of the financial pinch caused by the ongoing pandemic.

Long linked with Timo Werner, the Reds — who were either unwilling or unable to match the financial package on offer in West London — were beaten to the signing of the German international by Chelsea.

The prevailing sense, as suggested by all of the journalists close to the club, is that reigning European, World, and English champions will be relatively quiet in the upcoming transfer market. As a club, unlike Chelsea — who are ostensibly a plaything for their billionaire oligarch owner, Roman Abramovich — Liverpool are self-sustaining and only spend money they can earn themselves, be that through commercial income, match-day revenue or the money generated by player sales.

All these streams of income, however, have been impacted by COVID-19 in various scales of severity and the Reds will have to cut their transfer cloth accordingly this summer, if they are to be active in the market and increase on the minimal amount they spent last summer where Adrian — free — Sepp Van Der Berg and Harvey Elliott — both small prices — were the only additions made to the squad.

Known for their long-term planning and almost religious adherence to a transfer structure — Liverpool plan two transfer windows in advance and will wait, as in the case of Virgil van Dijk’s transfer from Southampton, for the right signing to become available rather than deviate from their plan — the Reds have shown in the past that they can and will opportunistically pluck players from relegated sides in order to flesh out the squad or to take advantage of a decreased market value.

Georginio Wijnaldum, although for a pricey £25,000,000, arrived at Anfield from relegated Newcastle United in the summer of 2016 and the Dutchman set a precedent that was followed in the next two summers. In 2017, Andy Robertson joined the Reds from the demoted Hull City for a fee of £8,000,000 and, in the summer of 2018, Xherdan Shaqiri committed to Liverpool after his £13,500,000 relegation clause at Stoke City was triggered.

With their financial muscle lessened, this is a route Liverpool could take again this summer and, with five teams still in the relegation mire, have plenty of quality options to chose from. From each club, we will assess players if potential interest to the Reds and their potential suitability to the Anfield side.

Going in descending order, we will next look at Aston Villa who — at the time of writing — find themselves in 18th place.

The Villains — despite having the biggest net spend in the Premier League last summer at a princely sum of £137,000,000 — have endured a miserable campaign back in the top division after winning promotion and find themselves in the mire with five games remaining, thanks in part to conceding the most goals in the division with 62.

Despite this, the Dean Smith coached team has some players who could be of interest to Liverpool if they do indeed fall through the relegation trap door and back to the Championship at the first time of asking.

Jack Grealish: The 24-year-old has been one of the only bright sparks in wretched season at Villa Park. The academy graduate has carried the attacking can for the Villains all season, contributing seven goals and six assists in the league — a total that represents 36% of all their goals — and adding creativity to a team who has only scored 36 league goals.

Often typecast as a luxury player with a questionable attitude, the former Ireland underage international contributes defensively and works hard for the cause. Grealish averages .9 tackles and .5 interceptions per game this season, despite not always playing in the central band of the pitch and often finding himself on the left-hand side of a front three.

Versatile and with a high degree of tactical intelligence, the Villa number 10 could play in several roles for the Reds, if any hypothetical transfer ever to take place, particularly in the centre of midfield 2016/2017 Adam Lallana role. Grealish’s ability on the ball — where he posts an average of 2.6 key passes a game and shoots 1.9 times — would enable him to be a threat running from deep in midfield, reminiscent of Lallana’s best season in a Red jersey — where he netted eight times and laid on seven assists — in Klopp’s first full season, 16/17.

Linked to Manchester United, with a fee in the region of £50,000,000 mooted, Grealish could be available at a discounted price if Villa drop down a division a player of his ability could move the needle for Liverpool’s recruitment team.

John McGinn: Liverpool struck gold in the transfer market when signing Andrew Robertson from relegated Hull City in the summer of 2017 and they could continue that trend with his compatriot this summer.

The 25-year-old Scotland international was a key part of Villa’s promotion-winning team in 2018/2019 and was an ever-present in their team in the Premier League until a fractured ankle sustained at home to Southampton in December ruled the former Hibernian midfield linchpin out for three months, a period of which the team’s fortunes dwindled significantly.

Hypothetically, the Scot could fulfill the Georginio Wijnaldum role in the Liverpool team, using his spatial intelligence and hard-working approach to provide the midfield coverage that allows the Reds attacking full-backs, Trent Alexander-Arnold and Andrew Robertson, to bomb forward, safe in the knowledge that it won’t expose the team defensively. In most metrics, as seen by the below radar, source from Understat, the Villa number 7 compares favourably against Wijnaldum. 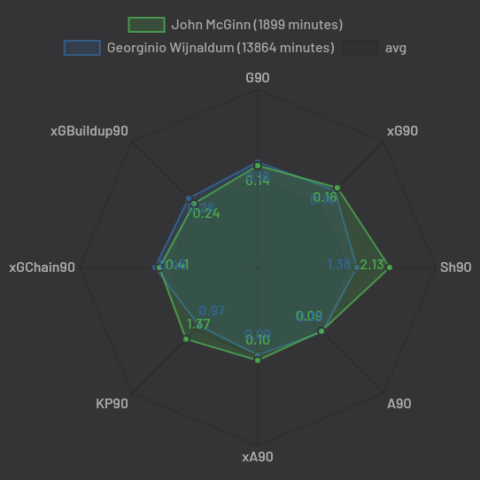 McGinn, who has 21 Scotland caps, is a solid, defensively capable midfielder who averages two successful tackles a game and has a penchant for running. The central midfielder, who joined Villa in 2018, has won four man of the match awards in the Premier League this season, despite — thanks to injury — only playing 22 times for a struggling side.

Valued at £14,000,00 by Transfermarkt, McGinn could be a shrewd acquisition for Liverpool — a player who suits their intense style of play — if Wijnaldum doesn’t sign a new deal.