Jordan Henderson is an extremely versatile player, as we’ve seen throughout the entirety of his Liverpool career.

Whether it’s been as the midfield anchor, as an energetic, box to box tornado of engine room intensity or — as we saw in his first season with the Reds, under Kenny Dalglish — as a right midfielder in midfield four, the captain has been a consistent performer for most of the time since his summer 2011 move from Sunderland.

Playing as the box to box midfielder, though, or — to borrow a Jurgen Klopp phrase — the number 8 has been the role where Henderson has played his best football at Anfield.

In both the 2013/2014 & 2014/2015 season’s, the Sunderland native — with Steven Gerrard assuming the playmaker responsibilities — excelled, using his boundless energy and enthusiasm for graft to contribute in both attack and defence.

Upon Klopp’s appointment, Henderson dropped deeper into midfield to become the defensive shield sitting in front of the back four. Often maligned for the safety of his passing — although this could well have been doctors orders and a tactical prescription — the England international nonetheless impressed.

With Fabinho arriving in the summer of 2018 to play as anchorman in midfield, Henderson approached Klopp to ask him to play him higher up the pitch and the German — noting that it was his captains best role — agreed to the positional shift.

What followed was some of the now 30-year-olds best showings in a red-shirt. With Fabinho sitting behind and offering a level of protection and solidity that allowed Henderson to influence the game more in an attacking sense, the number 14 shone and made big contributions in key games.

The captain was brilliant in the 2019 Champions League home semi-final against Barcelona, setting up the first goal — which Divock Origi tapped into an empty — by using his trademark energy to burst into the box and force Marc Andre Ter Stegen into parrying his shot into the path of Origi.

Henderson also scored a massive goal away to Southampton in the ultimately unsuccessful domestic title race that season, but, again, he displayed that long busting runs into the box is an attribute he boasts in spades and a trait he can use to score goals.

If the arrival of Fabinho — who joined in a big-money move from Monaco — helped to free up the Liverpool captain from a lot of his defensive work, although he still has to remain diligent and cover for Trent Alexander Arnold on the right-hand side, then the signing of Thiago Alcantara could help Henderson make the type of forward run that yielded a goal against Southampton — or that set up a goal against Barcelona in the Champions League — far more often.

The Spaniard, who joined the club from FC Bayern this past summer, is the consummate midfield playmaker, a magnet for the ball with every kind of pass in his wheelhouse, with the eagle-eyed creative vision to open up any defensive shape.

The dominant narrative from the Merseyside derby on Saturday was how Liverpool — who lost Virgil van Dijk to a season-ending injury after a horror challenge from Jordan Pickford and who had a legitimate late winner wrongly ruled out — were robbed by shoddy officiating, and that is true.

But it shouldn’t be lost in the noise that the Reds were excellent and, in particular, their midfield three produced a brilliant performance.

It was Henderson’s best performance in a number of months and his would-be late winner — which was wrongly disallowed — highlighted the attacking contributions he could make when playing next to Thiago.

The Spaniard played a sumptuous, no-look pass into the path of Sadio Mane and the Senegalese star’s low left-footed cross was swept past the hapless Pickford by Henderson, whose late run into the box was undetected by the Everton defense. 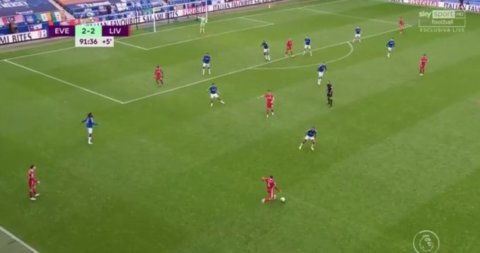 Sadly, and inexplicably, the goal was disallowed, but the move itself provides a glimpse into what the future may hold for Liverpool. It wasn’t the 30-year-old’s only standout offensive moment, with a raking pass to Mane also worthy of mention.

Henderson, knowing that Thiago — who is among the best players in the world in his position — will take the playmaking responsibilities, can run forward with the insurance of having the Spaniard, whose press resistance and positional savvy means he will very rarely be dispossessed or be caught out of position, behind him.

Fabinho — or possibly Georginio Wijnaldum, who can also add defensive solidity ahead of the back-line — would also bolster the midfield and give even more license to the skipper to bomb forward.

There were plenty of frustrating elements from the 2-2 draw at Goodison Park, but the midfield showing — with Henderson harking back to his 2013-2015 self — augurs well for the future.