Jurgen Klopp’s plans have been hampered by injuries this season.

At the time of writing, Liverpool have ten first-team players missing with injuries.

The midfield — where Naby Keita, Thiago Alcantara, Alex Oxlade Chamberlain, Xherdan Shaqiri, and James Milner are all injury absences — has been particularly afflicted by set-backs.

But with misfortune for some comes opportunities for others. Curtis Jones, who only made six appearances in all competitions last season, has taken his chance in the team with both hands so far this season.

Always clearly talented, the 19-year-old — who memorably scored a long-range Merseyside Derby winner versus Everton — has added the steel of tactical intelligence to his naturally exciting game this season.

The narrative was that Jones would excel going forward but that the “boring side” of his game — the tactical discipline and the awareness of tracking runners in midfield — needed work.

So far this season, however, the academy graduate has shown that he is adept at operating in midfield on both sides of the ball. The all-round nature of Jones’ attribute were best displayed in Liverpool’s 1-0 Champions League victory over Ajax at Anfield last week.

Not only did the England youth international score the goal that will see the Reds win the group with a game to spare, but he also registered the most shots in the game with four and completed the most successful take on’s, two. The youngster also hit the post with a shot that had beaten the keeper all ends up and completed 79% of his passes, many of which were ambitious in nature and intended to advance the home team in attack.

Rolling up his sleeves, Jones also contributed to the defensive side of the game, which, given the hosts looked jaded for much of the game, proved vitally important. The former Liverpool under 18’s captain won four out of five aerial duels — the most for the Reds — and made two clearances and won one interception.

The performance against the Dutch champions wasn’t a one-off. Jones has consistently been playing well this season, whether he has been tasked with being a sitting midfielder, an attacking engine room dynamo or — quite strangely — filling in as a temporary right-back away to Brighton.

In the below pizza graphs — sourced from FBref and Statsbomb — we can see that Jones, exhibiting his broad skillset, stacks up favourably in both defensive midfielder and attacking midfielder comparisons. 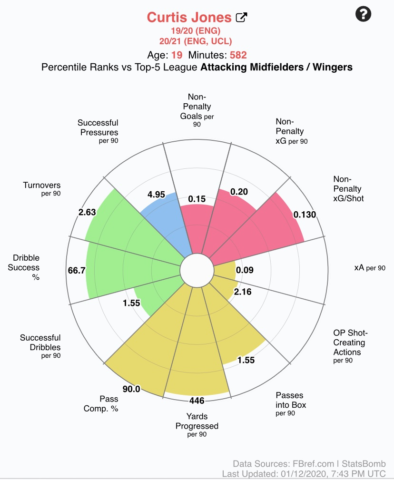 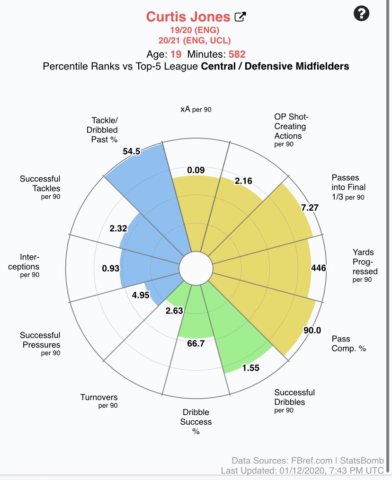 Like with any footballer of such tender years and with such a relative lack of experience, there are definitely areas of Jones’ games that need improving and — given he has such a small back catalogue of performances to boast as of yet —  the question of whether he can play so well consistently will correctly be asked.

But all the England under 21 international — who, at this juncture, should surely be considered for England’s European Championship squad next summer — can do is keep playing as well as possible as maintain his work rate and desire to not only contribute to the attack, but to also pull his weight in the unglamorous side of the game.

The Liverpudlian’s minutes will naturally start to decrease when the club’s walking wounded cast of midfielders begin to return but even players of the calibre of Keita and Thiago — two players who, when fit, are among the best in the league in their position — may have a battle on their hands to oust Jones from the team.

With careful management, which is taken as a given under Klopp and Pepijn Lijnders, and the same kind of dedication and ambition that has seen him break into the squad of the defending English champions as a teenager, Jones — at his current rate of stratospheric trajectory and exponential improvement —  could well establish himself as Liverpool’s best academy produced midfielder since Steven Gerrard.