After last week’s home defeat to Atalanta – Liverpool’s twelfth loss at Anfield in the European Cup/Champions League – Group D was suddenly fraught with unexpected possibilities. Jürgen Klopp’s men, amidst a biblical injury crisis, needed to settle their European affairs as soon as possible, but given the nature of recent performances and the strength of Ajax, victory was by no means a foregone conclusion.

The Reds set up in a 4-3-3, with Salah and Mané flanking Jota, in place of Firmino; Jones supporting Wijnaldum and Henderson; and a backline of Williams, Matip, Fabinho, Robertson, ahead of Kelleher.

Ajax also utilised a 4-3-3, with inverted forwards playing ahead of the false 9. Like in the reverse fixture Erik ten Hag instructed them to press the Liverpool centrebacks, and block passing lanes into the midfielders.

Out of possession, this structure resembled a midfield box demonstrating ten Hag’s wish to use a pressing trap to catch Liverpool in transition, and break at speed on the counter-attack, with the wingers ahead of the ball situation, and able to run into space.

Ajax also used a 2-3 structure at the back when building up from deep. This base presented multiple passing lanes to each player, and offered a structure through which the Dutch side could play through or around Liverpool’s press.

Liverpool’s press was present early on in the game but dissipated as the game went on. Two early opportunities for Curtis Jones came courtesy of Liverpool pressing with intensity, and breaking into space as they caught Ajax in transition.

The structure of the game remained fluid, with a regular to-and-fro characterising the early phases. Ajax looked to target Liverpool’s right side, where Curtis Jones and Neco Williams were. 46 per cent of their attacks in the game came down this side, with only 25 per cent coming from the centre of the pitch.

As this graphic from WhoScored? shows, Robertson and Mané were able to effectively pin back Antony and Mazraoui on the Ajax right side, but over on the left, Tadic was able to support Neres, who along with Taglafico and Gravenberch, formed a quadrangle through which they could combine with one another. 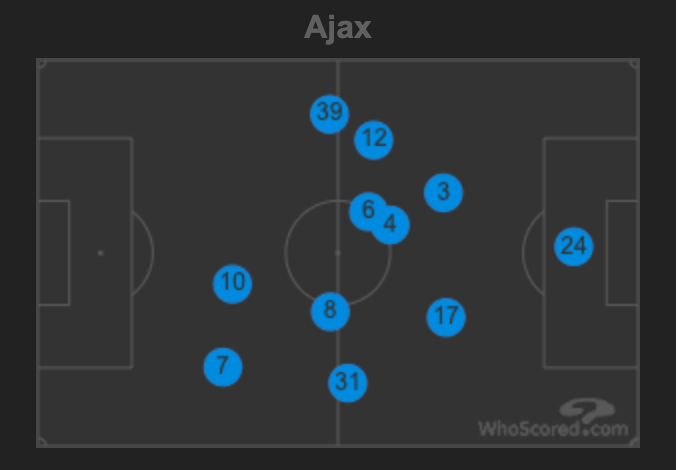 As Liverpool’s pressing dropped off, the Reds looked to retain a compact shape. To deal with this Ajax looked to move Liverpool’s players out of position, in order to open up passing channels to Tadic and Neres. When building up in deep areas, Ajax would look to use their midfield three to create space; one would drop deep, alongside the six, whilst the other would simultaneously move up, usually Gravenberch in Liverpool’s right half space. When one of the no.8s would drop, it would create an overload, freeing up the fullback, and giving the Dutch side an opportunity to progress the ball forward through the wide areas.

The reigning Premier League champions had tactical plans of their own though. In the absence of a specialist progressive midfielder and without the creative ability of Alexander-Arnold, the centrebacks looked to simply bypass the midfield and hit the forwards directly. These direct progressive passes looked to expose the space beyond the Ajax fullbacks, and whilst it was more effective than some of the buildup play, it was not quite the key to unlock Ajax’s defence.

Caoimhin Kelleher contributed to this effort though, with his comfortability on both feet adding a more assured presence at the back, despite his inexperience. He made 21 long passes, with no noticeable discrepancy between passes on his left foot or right foot, proving useful on the occasions when he was pressed.

Jota’s movement into deeper areas was helpful, but also not very effective, with the biggest chances for Liverpool coming after their opener and once the gamestate favoured them. Prior to Jones’ goal, the Reds were not playing great, nor were they playing poorly, but they did not quite have control of the game nor were they able to manufacture significant goalscoring opportunities consistently. Like Atalanta, last week, we must credit Ajax for their role in this and we must also be mindful of the strains and stresses on the squad at the moment, with players like Gini Wijnaldum essentially fighting a war of physiological attrition.

Jones’ goal changed the nature of the game. Once Liverpool were ahead, the attacking onus and the necessity to take risks lay with Ajax. ten Hag’s side consequently needed to push up the field, play riskier passes, and be more aggressive if they wished to equalise, all of which offered the Reds the opportunity to break into space, in transition and at speed. As ever, once Liverpool take the lead, the nature of an opposition team needing to score an equaliser only makes the likelihood of Liverpool picking them off and increasing the deficit even greater. So from Jones’ goal onwards the gamestate essentially dictated the flow and development of the game, with Salah, Mané and Jota all breaking through on occasion, but all just coming short of putting the game away.

The delicate balance of the scoreline likely led Klopp to double down on his team selection and forego rotation, the calculation being that an extra 20-30 minutes for players such as Mané, Matip, Fabinho or Robertson, could be justified through ensuring that Liverpool won the group, and consequently, that would allow those players that did play the full game to be completely rested in the final group stage match, next week. It was a risk, but before we can judge whether it paid off, we’ll need to see how those players who played the full game on Tuesday night fare after the Wolves match.

This was not a vintage Liverpool performance by any means. However, as Micheal Owen mentioned on BT Sport’s post-match coverage, the most important thing for the Reds at the moment is to just stay in contention in their competitions. The squad is weak currently, but if the team can get through to the knockouts as it has done, and stay in touching distance of the top of the league table, once the hellish flurry of fixtures subsides, there is a real opportunity for Liverpool to contest major honours this season. A bit of fortune, like Onana’s error for the goal could certainly go a long way.