Curtis Jones’ meteoric rise continued last Wednesday as the youngster played a vital role in Liverpool’s 2-1 top of the table victory over Spurs at Anfield.

The 19-year-old’s all-action showing — which is quickly becoming his trademark — gave the Reds a platform to move back to the top of the table with a deserved victory over Jose Mourinho’s Catenaccio cockerels.

On the ball, the academy graduate completed 106 from 113 pass attempts. He also carried the ball effectively, entering the final third 16 times — four of which were into the penalty area, including the assist for Mohamed Salah’s opening goal — with his ambitious dribbling and deft close control. He also attempted three shots and manufactured two chances.

Jones’ cultured ability on the ball will shock nobody who watched his development in his underage days, but an additional feather he has added to his cap recently has been his desire for — and efficient application of — defensive and off the ball work.

Against Spurs, the England youth international made four interceptions as well as nine-ball recoveries, all the while winning the majority, four from five, out his aerial duels.

After being substituted at half time against Ajax away in the Champions League in October — a game in which the Reds’ midfield was porous and the hosts could play between the lines with relative ease — Jones’ defensive learning curb has been rapid and he now looks so assured on both sides of the ball. 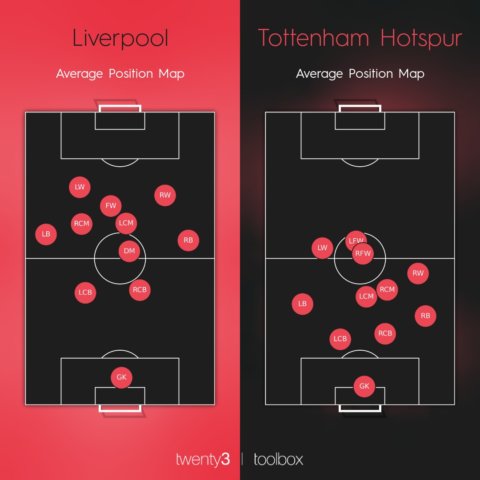 Another interesting element of the Liverpudlian’s performance against the London side was — as shown in the above image, courtesy of twenty3 sport — how centrally he played. Normally, the Reds’ midfielders tend to play wider and in the half-spaces but Jones was given the tactical latitude to drift around the pitch and a lot of his best work came in the central band of the pitch.

The on the ball freedom given to the academy graduate by Jurgen Klopp could provide a roadmap for how the German could utilize Thiago Alcantara when the Spaniard — who, at the time of writing, has just returned to training after a horrendous tackle by Richarlison in the Merseyside derby in October — returns to the fold.

Before the Spaniard joined Liverpool in the summer, many journalists in the Spanish media — who had knowledge of the 29-year-old agreeing terms with the English champions months before the transfer came to fruition — claimed that Klopp would use the former Barcelona midfield linchpin as a number 10, ahead of two defensive midfielders.

With the exception of Kevin De Bruyne, no midfielder in world football is better suited to taking a team’s midfield playmaking reins than Thiago and with the tactical comprehension, discipline, and hard work of Jordan Henderson, Georginio Wijnaldum, and or Fabinho he could have an ideal supporting cast to let him flex his considerable creative muscle.

Naby Keita, another supremely talented midfield technician — and even Takumi Minamino, who has been given opportunities in the engine room in recent games — could also fulfill this role and provide the creative spark to feed the Reds’ front three and take the burden off Trent Alexander Arnold and Andy Robertson at full-back.

The signing of Thiago was designed to — as assistant manager Pepijn Lijnders said — add more unpredictability to the Anfield team’s game. But in the Spaniard’s absence, Jones has put his hands up and has emerged as quality first team operator.

Now with their £20,000,000 signing near a return, Klopp has several quality options — not forgetting Alex Oxlade Chamberlain — to offer creativity and thrust to his midfield.

Roberto Firmino, Salah, and Sadio Mane will be licking their lips.