After the injuries to Virgil van Dijk and Joe Gomez, it was inevitable that the names of several centre-halves would be bandied about and linked to Liverpool.

Sven Botman, David Carmo, Dayot Upamecano and Ibrahim Konate have all been suggested as antidote’s to the Reds’ personnel shortage in the heart of their defence. Perhaps the name most regularly circulated in the media, though, is that of Brighton and Hove Albion’s Ben White.

According to reports in the Liverpool Echo, the defending champions have earmarked the 23-year-old as a possible target for the summer transfer window.

During his loan spell at Leeds United in the Championship last season and, to a lesser extent, with the Seagulls in the Premier League this season, White has proven himself to be a cultured defender who is comfortable with the ball at his feet, in the manner of John Stones.

The Englishman has also exhibited versatility, given he has regularly played in centre midfield for Brighton this term, a fact that once again highlights his ability to play in compressed areas of the field and the strength of his passing.

According to stats sourced from FBRef, the former Southampton youth player completes 82% of his passes — a more impressive feat when you consider he has played in midfield — many of which are ambitious in nature. Brighton’s number three has registered five key passes and made 52 passes into the final third so far this season.

Despite boasting these on ball abilities — attributes that are evidently favoured by Jurgen Klopp when it comes to signing players — White fails to tick one major box and that will most likely nip any potential move to Anfield in the bud.

The former Leeds loanee, as shown in the below image from Twenty3 Sport, attempts and wins fewer headers per 90 than most of the other names linked to Liverpool and the Reds’ current defensive personnel. These aerial figures are less impressive, too, when you consider White has often plied his trade in midfield and hasn’t had to compete with burly, physical centre forwards for the ball in the air. 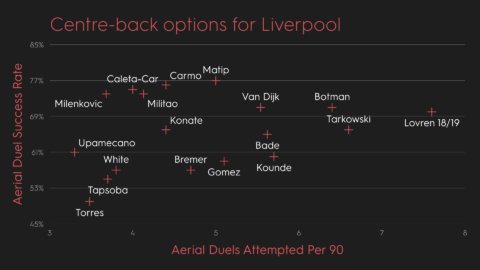 Klopp’s preferred style of football is an intense, claustrophobia-inducing pressing game that looks to pin opponents in their own half in an effort to win the ball back higher up the pitch and closer to the goal.

Most of the Reds’ opponents — especially in England — struggle to successfully play through this coordinated and physically intense pressure, so they have to devise other means to attack the Anfield side. Mostly, the strategy against Liverpool is to play long, direct passes over their press or to try and profit from set-pieces.

To combat this approach, Klopp likes to have tall, aerially dominant centre halves in his team. When you profile all the central defenders the German has signed at both Borussia Dortmund and Liverpool, a common thread has been the players’ strength in the air. Mats Hummels, Neven Subotic, Joel Matip, and van Dijk are physically dominant defenders and this shows in their capability to wins headers.

Whoever Liverpool signs in defence, whether it is in the January window or in the summer, expect their statistics in terms of aerial ability to be impressive. On this metric alone, don’t expect White to wear red any time soon.