Roberto Firmino was back to his best in Liverpool’s recent 3-1 win away to Spurs.

The Brazilian opened the scoring on the cusp of half time and showed the movement, touch, and sublime link play of old as the Reds scored their first league goals in over a month.

The number 9’s goal, a tap in after his intelligent delayed run saw him arrive in the six-yard box in time to tap in Sadio Mane’s left-footed cross, was his sixth in the league this season.

The influence of Thiago, who — after a raft of games as the deepest midfielder — played as a more advanced, number 8 was clear and the Spaniard took a lot of the creative burden off Firmino’s shoulders.

Liverpool ostensibly started in a 433 shape, their normal tactical regimen. But it became apparent as the game progressed that the formation was something closer to a 4222, also known as the box midfield.

With Mane and Mohamed Salah playing as a split, wide forward duo, Thiago and Firmino acted as a double number 10. Both players were constantly available to receive passes between the lines and this fluidity of movement saw the defending champions weave their way through Jose Mourinho’s low-block on a regular basis. 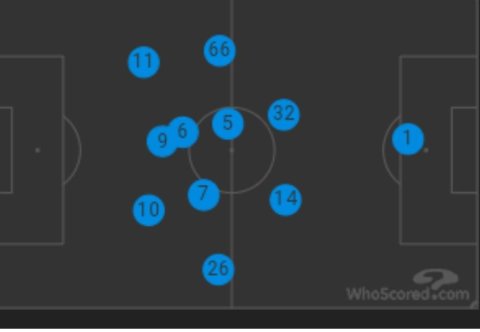 As we can see in the above-average position image — sourced from Whoscored.com — the pair played in close proximity to one another and this enabled Liverpool to dominate territorially with the Brazilian and the Spaniard able to receive, keep and progress the ball in advanced areas.

The Reds’ number 6 playing further up the field offers Jurgen Klopp food for thought for a potential tactical switch upon the return of Diogo Jota from injury in the next few weeks.

Since Salah joined the Anfield club in 2017, Liverpool have utilized a front three of Firmino, Mane, and the Egyptian to great effect. In that time frame, the Reds have played in two Champions League finals — winning one — as well as winning one Premier League title and finishing runners up, with a 97 point haul, in another season.

Firmino, the false 9, has been a key component to the front three functioning as well as it has and does with his selfless movement and link play providing the platform for his strike partners — who have either won or shared two of the last three Premier League Golden Boot awards — to thrive.

For all intents and purposes, despite wearing the number 9 shirt, the Brazilian is a number 10 and operates mainly in that space, the corridor between midfield and attack.

However, Thiago’s signing — provided he is played in a more advanced position, like against Spurs — could mean Liverpool move away from their false 9 system and play a more orthodox front three with Diogo Jota as the spearhead.

Operating in more or less the same area as the former Hoffenheim man, the Spain international could be Merseysiders false 9, just behind a conventional line leading forward.

The summer signing from FC Bayern, has the spatial awareness, technique, and vision to operate as the Reds’ main playmaker, either with our instead of Firmino.

In Liverpool’s most impressive performance to date this season — the 5-0 thrashing of Atalanta in Bergamo — Klopp elected for a front three of Jota, Mane, and Salah, and the trio combined and interchanged sublimely with the Portuguese taking home the match ball after a hattrick.

Thiago didn’t play that night but it was a window into the possibilities the English champions have in their attack and the tactical flexibility it offers Klopp.

Firmino’s pressing and his ability to rob — or at least force the opposition to play passes into the Reds’ press — the ball is an added benefit of the Brazilian international playing as the middle player in the front three.

But with Jota — who assistant manager Pepijn Lijnders described as a “pressing monster” — well adept at initiating and executing an orchestrated squeeze against the ball, Liverpool wouldn’t lose out off the ball with the Portuguese international starting.

The former Wolves player’s ambidexterity — his ability to shoot with either foot, which we have seen lead to goal already in his short stint at Anfield — means that he, Salah, and Mane can rotate throughout positions the game and cause headaches for the opposition defence.

All three forwards are pacey and have the ability to play on the last shoulder of defenders and this would force more teams to lower their defensive line and this plays into Liverpool’s hands by trapping opposition into their own halves.

Thiago showed that he and Firmino can operate on the same wavelength versus Spurs, but, in the future, the Spaniard could well replace the Brazilian as the teams attacking linchpin in attacking areas and this could lead to Jota establishing himself a key, regular starter.